At the End of Your Rope | Meridian Magazine

At the End of Your Rope

Maurine Proctor writes a regular column on Tuesdays on Meridian. 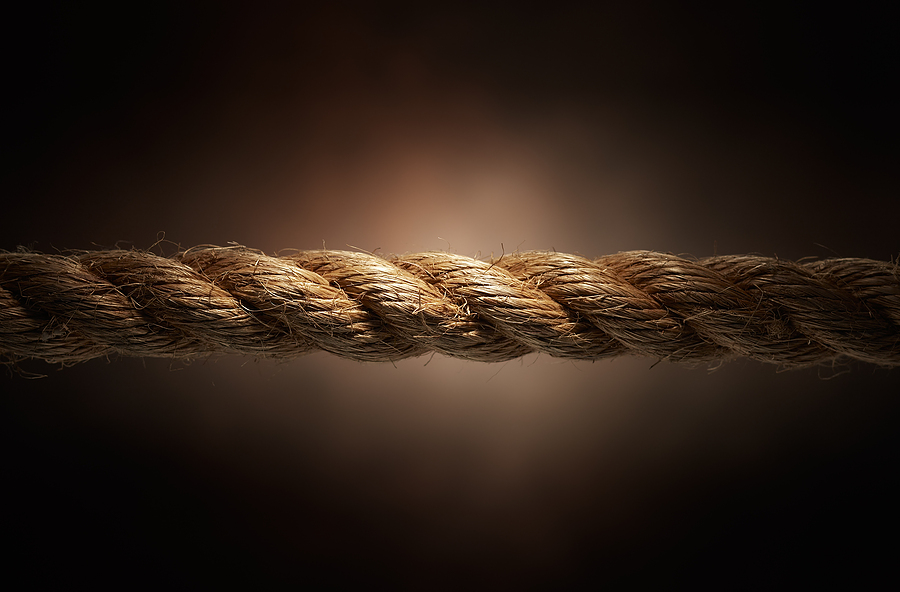 Two weeks ago at Girl’s Camp, we had a special activity one night based on the iron rod and Lehi’s vision of the tree of life.  It profoundly impacted the girls and every testimony the next day was about this experience.

It went like this.  We led the girls deep into the woods, where the darkness was thick, and blindfolded them, making it even darker and disorienting.  Then, one by one, they were led from the circle and given a rope to hang on to which represented the iron rod, the word of God.

They were not told why they should hold on to the rope or exactly where they were going, but instead that they would be given a guide, whose voice could be completely trusted to deliver them safely to their destination.

They were told, too, that if they were concerned or felt unsure, they could ask their guide anything and they would be given an answer that they could count on.

The rope was about 250 feet long and led through a tortuous path. Sometimes the girls had to walk across a trail that was gnarled with roots; sometimes they had to go under the rope to stay on the path.  Once in awhile the rope was wound around a fat tree trunk and they would have to feel their way around.  At one point a second rope took off at right angles, adding confusion.

This would have been hard enough in the dark, but to make it worse, all along the way were tempters, whose voices urged the girls to abandon the rope, to just let go and give up on their journey.

My husband, Scot, was one of those tempters, and he, like all the others, had a certain natural talent for it. The rule was the tempters couldn’t touch the girls, but their voices could allure, worry, or tempt them all along their path.  The temptations fell naturally from their lips.  They had heard them before in their own heads.

Scot followed along talking in each girl’s ear, hounding her, his voice loud enough that he all but drowned out the quieter voice of the guide.

To one girl, he said in the friendliest of voices, “If you follow me, I’ve got everything you want.  I have boyfriends, parties, money, fun.  Just let go of the rope.”

To another, he lied, “Everything has changed, and you no longer have to hold on to the rope.  You’re special and you can let go.”

He said, “This is scary.  If you let go, I can get rid of that blindfold and you can see everything clearly.  All your friends already have.”

But the most effective temptation of all was personal, “Do you realize how stupid you look holding on to that rope?  Truly, what you are doing is so dumb.”

That introduction of doubt and fear stymied many a girl making her way along that “iron rod.”

Still, most of the girls held on tight, felt their way along the rope, and ended up removing their blindfold at a beautiful “tree of life,” all lit up, with their bishop dressed in white to greet them with a friendly hand clasp.  They were safe.  They had made it.  Many of their eyes filled with tears of joy.

Isn’t it fascinating how Satan always uses the same patterns to pry us loose from our devotion to God? To knock us for a loop—especially when we are the end of our rope?

He likes to terrorize us, to make us frightened, so that we believe that everything that matters to us is on the line, that we can never have what we want, or that something precious is about to be snatched away, that our life and well-being itself is on the line.

He likes to paint our lives in such a way that we think something important is about to be lost, and that every hope we ever had was useless, worthless, unrealistic.  He wants us to believe that all of our efforts have been fruitless, that it was silly to try, that we have failed at everything, that we have put ourselves in a prison from which we can never be free.  He wants us to believe that things will never get better.

He likes to overwhelm us, send us multiple trials at once, strip us bare and clean, as a bone on the beach, of any sense of well-being.

He likes to threaten us with loss and fear.  He likes to paint the worst possible picture of our lives and our efforts and our worth.  He likes to exaggerate the faults of those who pain us.

He likes to tell us that silence means God isn’t there, or even more hurtful that God doesn’t care.  That is his biggest whopper of all.  God doesn’t love you, and your suffering simply doesn’t matter to him.  That is the voice of the Tempter.

You have been so stupid to put your faith and hope in a God that will not deliver you when you are so miserable.  Just let go of your hope.  Let go of your faith.  You look so stupid with your hopeful face turned heavenward.  This is the voice of the Tempter.

We may be brave when battered by life at first, but it is when, with grinding minute after grinding minute, we are worn down, that we may finally succumb.  You are so stupid waiting for a God who ignores your dearest plea.

How can we be so sure this is Satan’s pattern?  Because you can see it in scripture.  Take two instances.

No one can imagine the terror of seeing the Assyrian army blustering with its war machines, battle gear and sharp arrows as it surrounded little Jerusalem, 185,000 warriors strong, intent to decimate the city, intent for blood.

The army came with the bombast of a leader who scoffed at their foolish belief in Jehovah. While the people in Jerusalem trembled, while King Hezekiah rent his clothes in anguish, the Assyrian leader rants his curses:

Doth not Hezekiah persuade you to give over yourselves to die by famine and by thirst, saying The Lord our God shall deliver us out of the hand of the king of Assyria?

…Know ye not what I and my fathers have done unto all the people of other lands?  Were the gods of the nations of those lands any ways able to deliver their lands out of mine hand?

Who was there among all the gods of those nations that my fathers utterly destroyed, that could deliver people out of mine hand, that your God should be able to deliver you out of my hand?

Now therefore let not Hezekiah deceive you, nor persuade you on this manner, neither yet believe him:  for no god of any nation or kingdom was able to deliver his people out of mine hand, and out of the hand of my fathers:  how much less shall your God deliver you out of mine hand? (2 Chronicles 32: 11-15).

Translation:  Let go of the rope, you believers in Jehovah.  You look so stupid.  Truly, what you are doing is so dumb.

Result:  God sent a destroying angel and when the citizens of Jerusalem awoke the next morning, shaking with fear, they saw that the entire Assyrian army lay dead in their places.

Now this from the Book of Mormon:  Giddianhi, the leader of the ferocious and subtle Gadiantons, sent a letter to Lachoneus, the governor of the Nephites. He said:

It seemeth a pity unto me, most noble Lachoneus, that ye should be so foolish and vain as to suppose that ye can stand against so many brave men who are at my command, who do now at this time stand in their arms, and do await with great anxiety for the word—Go down upon the Nephites and destroy them.

…Yield yourselves up unto us, and unite with us and become acquainted with our secret works, and become our brethren that ye may be like unto us—not our slaves, but our brethren and partners of all our substance.

Translation:  Let go of the rope, you believers in Jehovah.  You look so stupid.  Truly, what you are doing is so dumb.

Result: Giddianhi is slain, the Gadianton robbers are defeated and the Nephites praise the Lord for their victories.

When you are clobbered with fear, when your hope seems to have blown away, don’t let go of the iron rod, your faith in God.

He knows who you are and what you need, and he has not abandoned you.

In Dante’s Divine Comedy, there is an inscription over the entrance to hell that reads, “Abandon hope, all ye who enter here.”  The Adversary would actually have us abandon hope and trust in the Lord, and his deliverance of us immediately–that hell begin for us right now.

If so tempted, let me paint for you the picture of one of the young-women campers holding on to the rope that night.  She was young, probably 13.  It may have been her first year at camp.  She probably felt vulnerable, blindfolded in the dark.  She was a slight figure in the dark, just a wisp.

Scot whispered to her with the voice of the tempter, “You look so stupid, holding on to that rope.  Truly, what you are doing is so dumb.”

With great dignity, she turned to him, her blindfolded eyes gazing towards his voice, and proclaimed, “Then so be it.”

I know in whom I have trusted, she might have said with Nephi.  I will not let go.