Photographs from the rally are by Michelle Anderson. 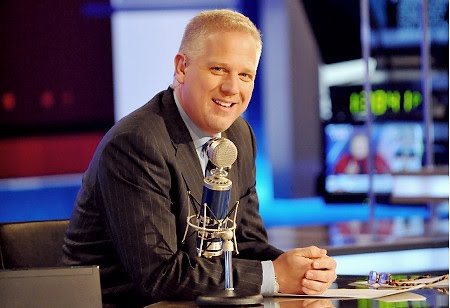 Everyone has an opinion about Glenn Beck.  His detractors are loud; his admirers are devoted, but this weekend settled one issue beyond debate.

If the LDS Fox News television host throws a party, he doesn’t have to worry that no one will come.

The National Park Service long ago stopped taking count of the numbers at gatherings, but the crowd at the National Mall for Beck’s Restoring Honor rally numbered anywhere from 330,000 to 650,000 according to estimates.  In calling for the renewal and restoration of America, the crowd spilled into adjoining fields and nearly a mile down the mall. Another 130,000 watched it on Facebook. 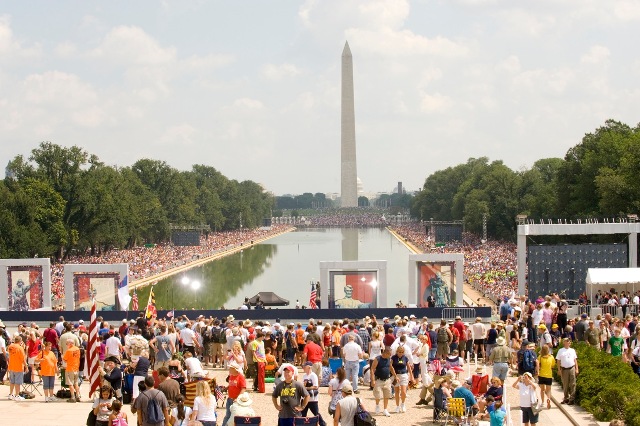 Among his guests were Sarah Palin and Dr. Alveda King, niece of Dr. Martin Luther King, Jr. who delivered his famous “I Have a Dream Speech” from this same location 47 years ago to the day, something Beck said he didn’t know when he planned the event.

Billed as a non-political rally, crowd members were told not to bring placards and the topic was not about big government or economic woes, but something Beck considers much more basic to restoring nation.  “Today, America turns back to God,” he proclaimed. “God dropped a giant sandbag on his head” to push him to organize the rally, he said. 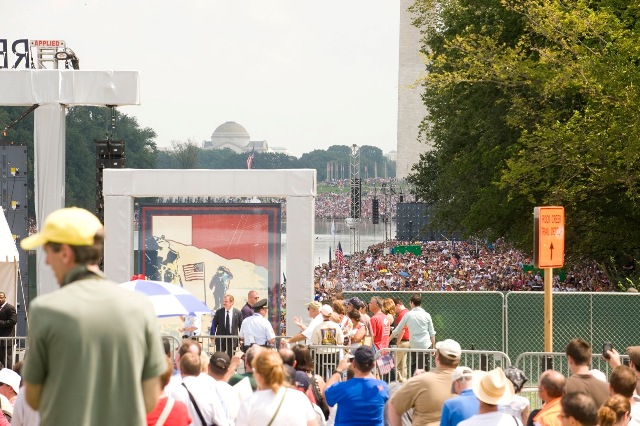 He said, “When I first started putting this together, I thought it was going to be political.”  Then he said that he “broke into a cold sweat.  I grabbed my assistant and said, ‘I don’t know how, but we’re wrong.’”

He said that he went back to the drawing board and realized that the underlying way back to America was through faith, hope, and charity and developing those qualities inside of us. He told the crowd that “God is the answer.”

Beck and his followers believe that the country is in trouble, and it is primarily because we have abandoned our values.

He said, “Today America finds itself as a crossroads.  Faith, hope and charity are growing dim.  We simply must remember who we were and who we can become, not what we have become.

Unless we challenge ourselves personally to be better than we currently are, he told the crowd, we will not live up to our promise. He said, “America, now is your moment.  Yesterday is gone.  The greatest American generation is simply the one who steps up to the seemingly impossible challenge.”

He said America has its scars, but that is not what we should concentrate on.  “If you look at the Washington Monument, you might notice its scars. A quarter of the way up it changes color.  How did the scar get there?  They stopped building it in the Civil War, and when the Civil War was over, they built again.”

When you look at the monument, he said, nobody sees the scars. “They see what it stands for” and at the top, a message is inscribed into the stone in Latin which means “Praise be to God.” 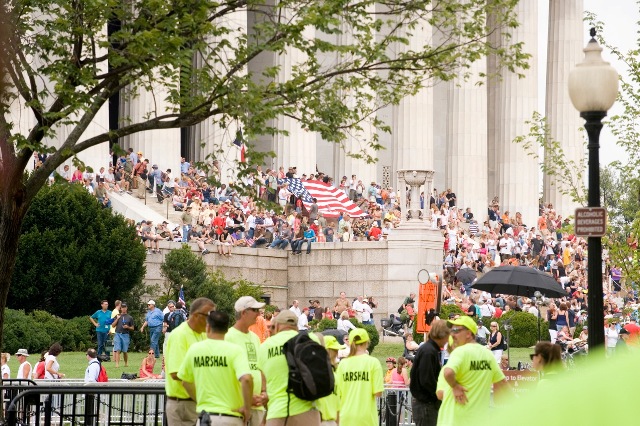 A people gets out of bondage by remembering God.  When the Children of Israel were in bondage, Beck said, Moses came with a stick from the Burning Bush.  They get their freedom and then they forget.  Periodically they wander until they remember that God is the answer.

Have trust in the Lord, he told the group.  Gesturing toward the monuments surrounding him, he said George Washington, Thomas Jefferson, Abraham Lincoln—they were just men.

“The message is that man makes a difference.  What is it that these men have that you don’t?  The answer is nothing. They are exactly like you.  They just did the hard thing.”

Beck said, “I came here last Saturday.  I wanted to spend some time with my children.  I wanted to show them these great monuments.  I went into the Lincoln Memorial.  And I stood there and I read the Gettysbrug Address on one wall and the Second Inaugurual Address on the other.  I touched the words and lifted my children up so they could touch the words as well.  Our documents, our most famous speeches, are American scripture.  They are alive as any other scripture is.  It speaks to us from the past. 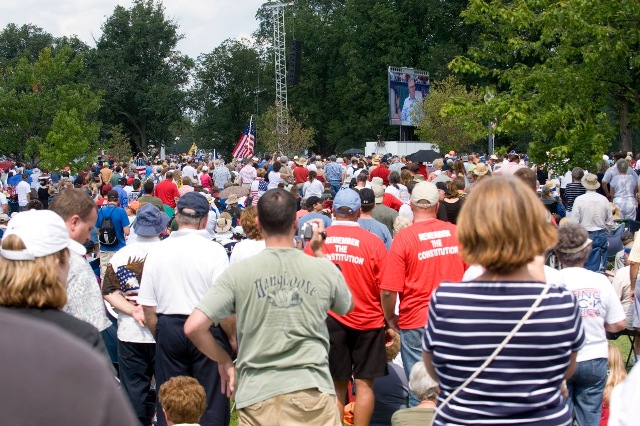 Then, he quoted the Gettysburg address saying those words applied to each new generation who cares about freedom.

“It is rather for us to be here dedicated to the great task remaining before us — that from these honored dead we take increased devotion to that cause for which they gave the last full measure of devotion — that we here highly resolve that these dead shall not have died in vain — that this nation, under God, shall have a new birth of freedom — and that government of the people, by the people, for the people, shall not perish from the earth.”

He said, “One of phrases that comes to mind a lot is that which you gaze upon, you shall become.  What is it we’re gazing upon it? What is it we look at?  What are you gazing on every day because that is what you will become.  Are we so jaded and so pessimistic that we no longer believe in the power to make a difference?  I testify to you here and now, one man can change the world.  I share with you an equal testimony.  That one man or woman is you.  Do not look to someone else.  Pick up your stick and stand.

Too many Americans are looking to someone else.

He said there are two kinds of wake-up calls.  One is through fear—like 9-11. “We were Americans together.  We were God’s human creations, standing together, but fear only wakes you up for a very short time.”

He said the apostles were afraid when men came with torches and swords for Jesus Christ.  During the Lord’s time in Gethsemane, they couldn’t stay awake to watch with him.  “They weren’t awake until after the resurrection and then they knew, and they never went to sleep again.  It wasn’t the fear of death.  It was the resurrection that kept them awake.”

Beck admonished the people at the rally to do three things.  “I ask you to pray on your knees, and pray with the door open so that your children can see.  That which they gaze upon, they will become.”

The second thing, he said was to tell the truth.  Tell the truth in your own life and then expect it from others.

The third he said was to act in charity.  “Connect with your family, your spouse and your children.  Give them extra time. Give them extra attention.  Charity begins at home first.

America, he said, was an experiment. “It’s not just a country.  It’s an idea—that man can rule himself.”  He asked, “Does the experiment fail with us?”

“My favorite line in the Declaration of Independence,” Beck said was this, “And for the support of this declaration, with a firm reliance on the protection of Divine Providence, we mutually pledge to each other our lives, our fortunes and our sacred honor.”

“How can you have firm reliance, if you don’t know what you believe?” he asked. “Find out what you really, truly believe.  It is the only way you can have firm reliance on it.  When the storms come up and your ship is being tossed, you’ve got to believe in something…

“We mutually pledge to each other our lives. ” Beck said he always read this as something the Viet Nam vets did, or the Korean vets did.

It’s not just that.  George Washington wanted to be a farmer, not a president. He wanted to be a surveyor, not a general, but when they came knocking at his door for help, he answered the call.

“There comes a time when one generation must sacrifice for the next, so our children can have a chance,” said Beck.  “If we want this for our children and our grandchildren, we must pledge our lives and our fortunes.”

Sounding every bit like a Latter-day Saint, he told the crowd that it was not enough to stick $20 in the basket at church.  He advised them to tithe. “It’s my joy and honor to give 10%.  Our nation can only do great works in our churches if they have the means to do it.”

He said that people have to live the truth and “the truth will set you free.”

“If we do these things,” Beck said, we will heal a nation.  We will do what the greatest American generation did the last century.  We will be a shelter for the whole world.  The storm that is coming is not just an American storm.  It is a global storm.”

America has always come in at the end to save the rest of the world during these storms. “But we are not prepared,” said Beck.

Hearing that this nation will fail, unless God is the foundation, is certainly a core doctrine for the Latter-day Saints, a theme oft repeated in the Book of Mormon  in words like these: “This is a land which is choice above all other lands;  wherefore he that doth possess it shall serve God or shall be swept off;  for it is the everlasting decree of God” (Ether 2:10).  It is not surprising to hear this sentiment at the center of Beck’s outlook.

What the media keeps harping on, however is Beck’s emerging role as a national leader for the Christian conservatives, something that is surprising since Beck is LDS, and some Evangelicals have difficulty with that.

Ralph Reed, former director of the Christian Coalition told CNN’s Belief Blog, “The evangelicals participating in the Restore Honor event are not endorsing Glenn Beck’s theology, nor is he asking them to.”

“Together, we and millions of our fellow citizens are calling America back to its Judeo-Christian values of faith, hard work, individual initiative, the centrality of marriage and family, hope, charity, and relying on God and civic and faith-based organizations rather than government,” said Reed, who leads the Faith and Freedom Coalition.”

Beck has spent the last year meeting Christian leaders asking them to join with him in calling for a return to the Judeo-Christian values that marked America’s founding.

Though Beck consciously chose to avoid overtly political discussion at this rally, and the crowd looked more like a Sunday School picnic than a political gathering, the press who have covered this event sees the enthusiastic response as a harbinger that this group, who are concerned about big government and are skeptical about incumbents, will have the power to flex their muscles at the upcoming election.