When 17-year-old violinist Joseph Matthews performed at the dedication of the Alex Haley Museum and Interpretive Center, he had no idea he would discover his family roots. Joseph, a high school senior from Memphis, Tennessee, was among hundreds who participated in two days of festivities at the Interpretive Center located behind Mr. Haley’s boyhood home in Henning, Tennessee. The center was dedicated on Friday, 13 August, 2010. 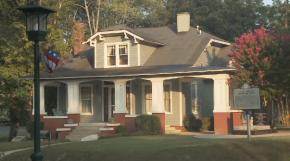 Mr. Haley, who passed away in 1992, received a Pulitzer Prize for his 1976 novel Roots: The Saga of an American Family. The book tells of his ancestors being sold into slavery in West Africa and their migration from North Carolina to Tennessee. The following year a TV series of Roots, described as “eight straight days of the Super Bowl,” aired and remains the highest rated TV miniseries in television history. Among the significant impact of Roots was a surge in interest throughout the world in family history research.

Inside the museum Joseph and his family visited a FamilySearch center sponsored by The Church of Jesus Christ of Latter-day Saints. Through the free online program FamilySearch.org, Joseph explored his ancestral lines. “Basically we were able to type in my grandmother’s mother’s and father’s name, and from there we searched their records and we were able to find information about their parents as well as their siblings, birthdates, wedding dates, things of that nature,” said Matthews. “We made a couple of steps to where we can make some pretty good discoveries in the future as to our family lineage. We’re going to find out a lot more about our family and where we came from.”

According to Art Johnson, FamilySearch area manager, the placement of the FamilySearch center within the Alex Haley Museum is a perfect fit, “I think it’s a great opportunity to simply share the message of family history and genealogy to individuals that come in and commemorate the accomplishments and successes of Mr. Haley’s life. It’s an opportunity to simply bring people in and help them understand their heritage the way that Mr. Haley did.”

William Haley, Alex’s son, said that resources available through The Church of Jesus Christ of Latter-day Saints are very valuable in searching African-American ancestry. “I always send them to the LDS Church. I say, ‘Well find an LDS Church with a history portion and go in there and they will help you find out who you are and it doesn’t matter what country or anything, they will help you.’ Folks are very surprised at that, but it’s true.”

This is one of several related projects supported by the Church. In 2001, FamilySearch released the Freedman’s Bank records on CD, a unique searchable database documenting several generations of African-Americans immediately following the Civil War. In 2006, FamilySearch participated in the Afro-American Historical and Genealogical Society’s (AAHGS) national conference in Salt Lake City. An African-American family history conference is held in Salt Lake City each year.

The Alex Haley Museum and Interpretive Center and FamilySearch center are located in Henning, Tennessee, about 45 miles northeast of Memphis.

Besides playing the violin, Joseph Matthews has started a new hobby. “I just think that the whole idea of researching your family lineage is really interesting, and if I am able to discover more about what their actual dreams were, I’d like to see myself being and living the dreams that they once had.”

Alex Haley’s dream and legacy of discovering our “roots” continues.