Book Review: A Time to Die by Jeffrey S. Savage 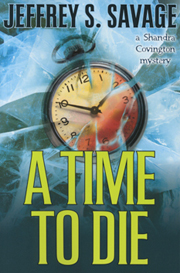 A lot of readers have had a hard time forgiving Jeffrey S. Savage for leaving his main character’s love interest lying bleeding on the floor in Dead on Arrival, the second book in the popular Shandra Covington mystery series. No spoiler intended, but in his newest novel A Time To Die readers finally get to see what happened to Bobby Richter and though the ending leaves room for more books in the series, it isn’t such an excruciating cliff hanger. Click to buy.

Volume three of the series begins inside the mind of an emotionally disturbed serial killer who believes he is providing a public service by murdering certain young women. Two murders don’t fit the pattern, but are somehow connected. The killer is devoted to his invalid sister and posts a picture in her room of each of his victims so that she can share in his triumphs and he can tell her of his great love for each of the victims.

Shandra wishes to spend her time hovering at Bobby’s bedside, but his fianc shows up and orders her banned from his room. He’s in a coma and she can’t get past the dragon guarding access to him, so Shandra accepts an assignment from her editor to interview the members of a prominent politician’s family following their daughter’s death by overdose. Facts don’t quite add up and she finds herself involved in a search for a serial killer with her own life on the line and only a series of seemingly unimportant clues to follow.

Since Bobby was nearly killed attempting to enter Shandra’s apartment, her apartment is considered unsafe and it is assumed Shandra was the intended victim, therefore she has to find a new place to live. Her tough motorcycle riding friend, Cord, comes to her rescue. The worst part is Cord is a health food nut, and Shandra practically starves to death, or so she thinks, eating Cord’s concoctions, until she winds up hanging out at another friend’s restaurant where she can get both quality and quantity food.

Savage who also writes under the name J. Scott Savage has written two science fiction/fantasy novels for young adults and is widely acclaimed by his young fans. I, and many other adult readers, consider him at his best writing mysteries for the adult market.

He has the distinction of being one of the few male writers who writes convincingly from a female character’s point of view. All of his characters are interesting and he maintains a strong individual voice for each. The book is plotted nicely and to go into further detail would spoil some of the surprise twists.

Savage lives in Utah with his wife and family, though he previous lived in California. He is in great demand as a speaker for book clubs, firesides, and school assemblies. His many fans will greet this new volume of the Shandra Covington Mysteries with open arms.