Heather Justesen knows how to write believable romance. Her newest book, Rebound, is a spin off from two earlier books, but works just fine as a stand-alone novel. I wouldn’t call it Romantic Suspense, but more accurately Suspenseful Romance. 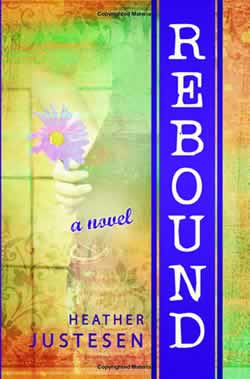 Lily, who is seven-months pregnant, comes home from the grocery store one day with her tired two-year-old in tow, to discover her house crawling with federal agents, her husband in jail, and her whole world falling apart. She soon learns she has been completely deceived by her husband, a scam artist who has become wealthy using stolen IDs and phony credit cards, some of which he took out in her name. He wants a divorce and his parents demand custody of their children, though for the time being, she has them. The court takes everything but her car, her son’s toys, and their clothes. She has no one to turn to but her best friend who is married to her cousin. Soon her friend’s brother, half of a pair of twins, gets involved. Curtis and his brother were adopted as infants and learned of the existence of two sisters after they became adults. They’re also mega basketball stars.

Lily’s parents and two high school age sisters live in Ephraim and another sister is going to school in Logan. When Lily lands a substitute teaching job in Logan, her coed sister helps her find an apartment, and Curtis, who is wrapping up his senior year at nearby Utah State University, with some urging from his sister, becomes friends with Lily. They’re both alarmed when they realize their friendship is headed toward romance when neither is ready for that kind of relationship. He’s headed for the NBA draft and her divorce isn’t final, she’s fighting a custody battle, working two part time jobs, and is too emotionally hurt to consider falling in love again so soon. They make a joint decision to see less of each other and keep their relationship on a friends-as-needed basis.

Lily’s legal battles and conniving in-laws along with reluctance on the part of the media to believe she had no knowledge of her husband’s illegal activities create one suspense plot. Curtis’s hesitation, then persistence, in finding and establishing a relationship with other members of his biological family form another suspense element. Curtis’s eagerness to become part of Lily’s life following her divorce and her reluctance to risk smearing his reputation by association with her as he begins to establish himself in the NBA create another dilemma. Overall, it is the careful and realistic romance that carries the book. That’s not to say the romance lacks sparks because it definitely doesn’t.

The plot is well crafted, fast, and fun. I enjoyed Justesen’s down-to-earth, easy dialog and style. The characters are multi-dimensional and show growth as the novel progresses. The only major drawback I found was the two main characters’ interest in each other, time and activities shared, etc. is too much before they back away and Lily’s divorce becomes final. Their saving grace is their realization that their feelings aren’t appropriate and that they take steps to see less of each other until she is legally single.

Because of the strong suspense element in the story, this type of romance is often considered a Suspense novel instead of a Romance which is too bad since there is a shortage in LDS writing of good solid love stories. There are plenty of the cheesy and teen style romances, but it is refreshing to read one where the couple is mature, responsible adults, and the romance develops over time, friendship, sacrifice, and shared values.

Though Rebound is not Justesen’s first book, she is relatively new to the writing scene and in a short time has established herself as a writer to watch and has picked up a strong fan base. She has worked for a weekly rural Utah newspaper. She and her husband have fostered fifteen children and are both active on the local ambulance service. They maintain and love their menagerie of cats, dogs, chickens, geese, ducks, and fish.