“This Little Book of Heart Poems”

My brother stood on the ledge of the bookcase, about four feet up, and began handing down the old books in our father’s library. Our parents had moved into an “assisted living” apartment, and along with our three sisters, we were clearing out their home.

“Wow! Look at some of these old books! I’ll bet they’re worth something!” There were early volumes of the Millennial Star (kind of a version of the Church News for the Saints in Great Britain), and original copies of the Journal of Discourses , along with editions of The Contributor and other 19 th century LDS publications.

To me, some of these old books were precious reminders of the past. As a genealogist they provided a week by week account of the history of the Church, its migrations, and development; they were my friends.

“How about this one?” he said. “What do you think we can get for it?” We didn’t really want to sell these items of our heritage, but we needed to raise funds to administer our parents’ estate, and to provide for them while they were still with us.

Once the top shelf was cleared off, my brother began on the next row, consisting of a variety of topical religious books we had read and studied with our parents as children. “Oh! Can I have that book?” one of my sisters asked. “Mom used to read stories from it to me whenever I was sick.”

“And I want this book,” said another sister. “I used to look at the pictures years ago. Does anyone mind?” We were having a wonderful time together, sharing memories, and dividing collections Mom and Dad had gathered and compiled during sixty-two years of marriage. 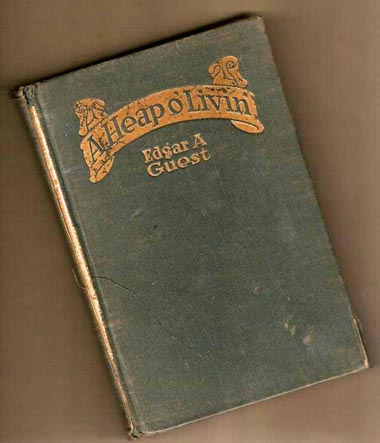 The worn book from the family library shelf.

My third sister picked up a small book, and began studying it. In a hushed voice she spoke over the chatter in the room, and said, “You guys need to see this.” We became quiet as she handed the little volume to me. It was a worn copy of A Heap O’ Livin by Edgar A. Guest. From the outside there was no particular value about this volume, but when I opened the cover, I found inscribed in a beautiful hand, on the fly leaf:

To the Family of Brother Timothy J. Winter

Please accept this little book of heart poems in loving remembrance of your dear departed husband and father. He lived a life of “True Nobility” (see page 91). I pray that the Lord will bless and comfort you, and that you may all so live that you may have an eternity of joy with him in the life to come.

I am, Your affectionate brother, 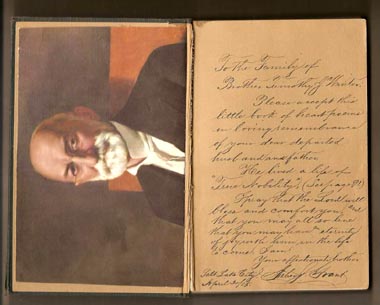 The inscription written by President Heber J. Grant, together with his picture as inserted in the flyleaf.

My sister asked, “Boy, How much do you think that book is worth?”

I said, “It probably isn’t worth a great deal in money, because President Grant signed many such books; but to me, this testimony, from a Prophet of God, that my great-grandfather was a “noble” man, is precious beyond price. I turned to page 91, and read:

Who does his task from day to day
And meets whatever comes his way,
Believing God has willed it so,
Has found real greatness here below.

Who guards his post, no matter where,
Believing God must need him there,
Although but lowly toil it be,
Has risen to nobility.

For great and low there’s but one test:
‘Tis that each man shall do his best.
Who works with all the strength he can
Shall never die in debt to man.

All the way home I wept, because my heart was so full of emotion. I could picture my great grandfather in my mind, a large man with a full head of white hair; a big cheerful smile that was partly covered by a bushy mustache. I had only seen pictures of him, but this testimony filled my mind with a heart image, and I realized my heart was turning to this father.

Timothy John Winter, the noble ancestor, is shown here. He is the heavyset man in the foreground in front of the mules with a hat on.

In April 2008 General Conference, President Dieter F. Uchtdorf spoke to the issue of “Faith of Our Fathers,” encouraging us to look to our ancestors, and ultimately to our Heavenly Father for faith. As a genealogist, I can confirm the truth in his words. Our ancestors came to the gospel of Jesus Christ, often through great trials and losses. As we turn our hearts to them we learn of their devotion to the Lord that provided a standard of faith our families can look to for strength.

A Standard of Faith: Samuel Eames

In 1840, another great-grandfather (third great), Samuel Eames, of Herefordshire , England , heard the restored gospel preached by some of the earliest missionaries to England . An unschooled, itinerate brick mason, he learned to read, in order to experience the teachings of the Book of Mormon.

For more than twenty years he served the Church in western England, while his children, one family at a time, moved to America to join the Saints in Utah .

Samuel continued to labor to save funds to join his family. He wrote beautiful letters to his children, in a shaky hand with imaginative spelling, but each letter was filled with a powerful testimony of the gospel of Jesus Christ. He told of the Church conferences held in his district in England , and how friends and acquaintances coming to meetings would stay in his small home, filling the beds and floors of the house, while he and his wife would go and stay with nonmember neighbors. He longed for the day when he could leave “this dark and wicked land” to join his loved ones in Zion .

Finally, in the summer of 1868, the home was sold, the funds raised, and the trip to the Salt Lake Valley was made. His wife had passed away years before, but his faith was enough to sustain him in his trek.

He arrived in Salt Lake City in August, 1868, in one of the last immigrant wagon trains before the completion of the transcontinental railroad. He was 78 years old. He settled in the pioneer community of Plain City , Utah , where he died and was buried just six weeks after his arrival. What a wonderful testimony of faith and courage this ancestor bears to me, and to all of our family!

Samuel Eames with his son John’s family just after their arrival in Plain City, shortly before Samuel died.  He is the old white-haired man on the back row.

As President Uchtdorf stated, we all have ancestors we can turn to for such an example. The scriptures tell us of scores of faithful men and women who gave their all to serve the Lord. Lehi, Nephi, Alma, Moses, Ruth, Job, and a hundred others are our spiritual ancestors – and their words come down to us with power, such that Father Lehi is also my father, and yours.

The messages of Isaiah and Malachi ring in my heart; and the words of Our Savior, our Brother, Jesus Christ, fill me with eternal faith and joy.

“This little book of heart poems” holds a special place on my shelf. “True Nobility” is scripture for my family. And great-grandfathers who loved, respected, and honored their God are examples that we will always hold dear.