Are We Not All Beggars? | Meridian Magazine

Are We Not All Beggars? 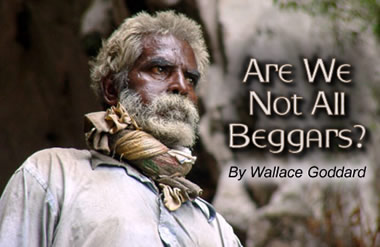 The older I get – and the longer I live in the South – the more I admire King Benjamin.

“And now, for the sake of . . . retaining a remission of your sins from day to day, that ye may walk guiltless before God – I would that ye should impart of your substance to the poor, every man according to that which he hath, such as feeding the hungry, clothing the naked, visiting the sick and administering to their relief, both spiritually and temporally, according to their wants.” (Mosiah 4:26, emphasis added)

King Benjamin seems to see our care of the poor as the sure indicator that the doctrine of the atonement has seeped into our souls.

Learning from the Poor

We first met the man I will call “H” some weeks after we had moved to a southern community. I was invited to speak at his baptism. Since we knew neither of the candidates for baptism, I supposed the missionaries were desperate for a speaker. Little did I know what lessons God had in store for me from this humble new convert.

H is a young black man with a scrawny, twisted body. Every step is a limp. Those are some of the effects of his cerebral palsy. In spite of his physical limitations, he speaks well and thinks with a lilt.

We got to know H better as he attended a Sunday school class I taught. He listened attentively whenever he was there. Occasionally his hand would shoot up. I would call on him and he would make comments that might be described as offbeat. They were insightful, usually delivered with an ironic chuckle, and they always looked at life and the gospel from an unexpected perspective.

Over the years we had H over for dinner or took him out to dinner a few times. I took him to a movie once. I can’t remember why I was giving H a ride when he told me some details about his childhood. His mother died when he was a child. When he was 12, his father equipped him with a gun and sent him out to sell drugs. His father was ashamed of his son’s twisted body, so he ultimately had him committed to an institution. H felt desperately lonely there. But there was nothing he could do. I was amazed at the string of pains he endured.

When Nancy and I visited H’s apartment in a reputedly-dangerous neighborhood, we were always amazed at the way he felt honored to have “the priesthood of God” in his home. He spoke longingly of the day when he would receive the priesthood.

A Trip to the Hospital

One day when we checked our phone messages, we found one from H saying that he was in the state mental hospital. We went to visit. While H has had recurring bouts with mental illness, the main reason for this confinement was a disagreement he had with his father. He had asked his father to vacate his apartment because he was selling drugs and causing trouble. Words were spoken. His father called the police and told them to pick up his son because he had gone crazy again. While H was in the hospital, his father cashed and spent H’s disability checks, leaving all bills unpaid.

H taught us a vital lesson in appreciation as we sat in the modest visiting room of the state hospital. He said that he had gotten pretty discouraged. Then he realized something that helped: “I won’t say my life will get any better. It can’t get no better than this! You can change your scenery but breathin’ is ’bout as good as it gets.”  I was amazed. He rejoiced in the blessing of breathing as he sat clutching the hymnbook we brought him sitting incarcerated, uneducated, unemployed, and disabled.

One day on the way home from the office I felt that I had to stop at H’s place. It had been too long since we visited him at the state hospital. I wondered how he was doing at home. I found his place and went to the door. I knocked. No answer. I knocked again. A gruff and round black woman came to the door. I asked for H. She walked away. I wasn’t sure if I was supposed to follow but I did. She marched into a back bedroom where H’s shriveled body lay on the bed facing the wall. When I greeted him he rolled over, “Hey, Bruther Goddurd.” The black woman with her handsome little boy stood nearby. The woman kept threatening to hit her little boy. H introduced the woman as his fiance.

Trying Hard and Not Making It

Since his dad spent all his money while he was in the hospital, H had no money to pay his bills. His house (for which he paid $20 per month rent – you can imagine the place) had no gas. No water. He had no phone except a pager. A charity paid his electric bill. He is unable to work because of his disabilities. He had tried college classes but found it hard to figure out the system. He was discouraged. But he brightened to have “the priesthood of God in his home.” I gave him three things: the money I had in my pocket, the appreciation for him that flows naturally from my heart, and a promise to call the Relief Society.

Then I left on a trip. Twelve days later, back at work, H called me and told me that he was staying at his uncle’s place because it was hard to live in the winter without water and heat. He and his girlfriend were breaking up. He wondered if he could borrow a few dollars from me. I asked if he had heard from the Church. Not a word. I sighed. Sometimes the priesthood of God doesn’t deliver. I met with our bishop the next morning about getting some help. I continue to suspect that none of us are doing enough.

And H is not alone. There are H’s in every community, awaiting those who respond to the Master’s call. They are, as much as anything, our rendezvous with Jesus. “Inasmuch as ye have done it unto one of the least of these my brethren, ye have done it unto me” (Matthew 25:40).

It seems to me that Latter-day Saints are caught in a mighty clash of values. We believe in helping the poor. Yet we also believe in self-sufficiency. Sometimes those two can co-exist fairly peacefully – unless you live where poverty and discrimination are common.

H tries very hard, but in the race of life he has a twisted body and a crushing burden. He keeps trying, but sometimes he gets discouraged. Our experiences in the South have taught me forcefully that my appreciation for self-sufficiency does not justify keeping the poor at arms’ length. We must help.

“And also, ye yourselves will succor those that stand in need of your succor; ye will administer of your substance unto him that standeth in need; and ye will not suffer that the beggar putteth up his petition to you in vain, and turn him out to perish.

“Perhaps thou shalt say: The man has brought upon himself his misery; therefore I will stay my hand, and will not give unto him of my food, nor impart unto him of my substance that he may not suffer, for his punishments are just –

“But I say unto you, O man, whosoever doeth this, the same hath great cause to repent; and except he repenteth of that which he hath done he perisheth forever, and hath no interest in the kingdom of God.

Indeed, we are all beggars. None of us will feel self-sufficient when we face God at the judgment bar.

God expects us to “succor the weak, lift up the hands which hang down, and strengthen the feeble knees” (D&C 81:5). Many of us are tempted to use the self-sufficiency argument to excuse ourselves from our Christian duties.

Of course self-sufficiency is a true principle. We believe in being anxiously engaged in a good cause. We are to cheerfully do all we are able. But it is not my job to impose self-sufficiency on another person. My obligation towards others is charity and benevolence. That is one of the central messages of the Book of Mormon. It is one of the great latter-day challenges.

If any of us turn away from the poor, we may feel quite lonely on judgment day. Joseph Smith’s words will ring in our ears: “. if you would have God have mercy on you, have mercy on one another” (TPJS p. 241).

After all, “a man filled with the love of God, is not content with blessing his family alone, but ranges through the whole world, anxious to bless the whole human race” (TPJS p.174).

I thank H for the lessons he has taught me about gratitude, determination, and life. I know that God expects me to do more than I have to help him.