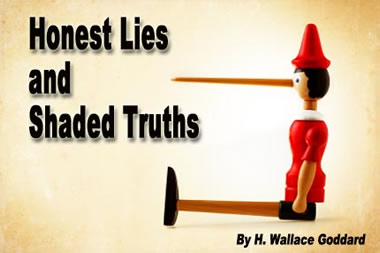 Honesty is tricky business. It can be either good or bad. Sometimes we do the bad kind of honesty and call it good. That is very destructive. It is also very dishonest.

A mother had observed her daughter doing something that bothered her. She said nothing at the time but waited until the family was gathered for dinner. Then, in front of family and friends, the mother described her daughter’s bad behavior.

When a family member challenged her, suggesting that the matter should be handled privately, the mother confidently announced that she did not intend to be anything but honest. “In this family, we practice honesty.”

Ouch! Is honesty an excuse for attacking and humiliating others? Honesty is not the same thing as wanton dumping of accusations on other people’s heads regardless of the apparent factual basis for the accusations. The commitment to be honest in our dealings with each other does not preclude wisdom and consideration in our relations with each other.

Honesty at Its Best

One of the marks of healthy honesty is that it is modest; it never declares itself. I have never heard a person at the office supply closet announcing, “I was thinking about taking some supplies for personal use, but I must be honest.” Healthy honesty is almost always an inner dialogue. It is a discussion in which we challenge ourselves to live by the standards we have accepted.

In my experience, the honesty preface is commonly a way of justifying the violation of fundamental commandments: “I must be honest with you. I find your behavior to be repugnant and your character to be inferior.” This is honesty? Is this the way God wants us to talk with each other? I’m confident that God recommends a different variety of honesty.

Gods reminds us that we are nothing without charity. And “charity suffereth long and is kind” (1 Corinthians 13:4). God certainly has something besides insults in mind when he recommends honesty. He would never have us jump into a delicate discussion without thoughtfulness and compassion

I don’t know if there is a case study on healthy relationships anywhere in sacred history that compares with Joseph Smith’s incarceration in Liberty Jail. After he was foully incarcerated and his people were cruelly driven, Joseph cried out to God: “Let thine anger be kindled against our enemies; and, in the fury of thine heart, with thy sword avenge us of our wrongs” (D&C 121:5). It appears that Joseph was ready for some Missourians to be smitten.

Joseph’s wrath was certainly honest. He and the saints had been treated abominably. Yet God seized on the situation to teach Joseph the principles of heavenly power. Let’s look at God’s words and see if we can see their application in our lives.

We only have heavenly power when we operate by heavenly principles.

37 That they may be conferred upon us, it is true; but when we undertake to cover our sins,

We humans like to blame others rather than take responsibility or show compassion.

or to gratify our pride,

We claim to be right, noble, good, innocent.

We want to be in charge.

or to exercise control or dominion or compulsion upon the souls of the children of men, in any degree of unrighteousness,

We want things our way.

behold, the heavens withdraw themselves;

We push Heaven away.

the Spirit of the Lord is grieved;

Heaven weeps when we choose to torment each other rather than bless each other.

and when it is withdrawn, Amen to the priesthood or the authority of that man. v. 37

We lose power any time we try to take it.

Behold, ere he is aware, he is left unto himself,

“Left to ourselves.” We push out God and other people and set ourselves on the throne of Truth.

to kick against the pricks,

We fight against the stabs of the Spirit.

to persecute the saints,

We pile the blame on our victim.

We are at odds with God’s redemptive purposes.

We have learned by sad experience that it is the nature and disposition of almost all men, as soon as they get a little authority, as they suppose, they will immediately begin to exercise unrighteous dominion. v. 39

Humans don’t handle power very well. We are almost universally inclined to think we are right and to try to impose our will on those around us.

No power or influence can or ought to be maintained by virtue of the priesthood [or marriage or parenthood],

Power is not the way to control people. God-who has all power-chooses other means.

only by persuasion, by long-suffering, by gentleness and meekness, and by love unfeigned; v. 41

God chooses gentle influence over brute bludgeoning. We can only correct those we genuinely love.

42 By kindness, and pure knowledge, which shall greatly enlarge the soul without hypocrisy, and without guile–
v. 43

One of my favorite phrases in scripture: “pure knowledge”! Knowledge filtered of earthly impurity and human pollution. We must see each other as God sees us!

Reproving betimes with sharpness, when moved upon by the Holy Ghost; and then showing forth afterwards an increase of love toward him whom thou hast reproved, lest he esteem thee to be his enemy; v. 44

We may reprove-but only when moved upon by the Holy Ghost.

That he may know that thy faithfulness is stronger than the cords of death. v. 44

The abundant evidence of our love must overwhelm any sense of impatience.

Let thy bowels also be full of charity towards all men, and to the household of faith, and let virtue garnish thy thoughts unceasingly;

There are no healthy relationships without charity. We are not right ourselves unless we see life through the lenses of virtue.

then shall thy confidence wax strong in the presence of God; and the doctrine of the priesthood shall distil upon thy soul as the dews from heaven.
v. 45

When we follow principles of heavenly power, we feel the power that we have in partnership with God. We are filled with His power.

The Holy Ghost shall be thy constant companion, and thy scepter an unchanging scepter of righteousness and truth; and thy dominion shall be an everlasting dominion, and without compulsory means it shall flow unto thee forever and ever. v. 46

Heavenly power flows to us naturally and automatically when we use heavenly principles of power.

I am keenly aware of my many faults and shortcomings. Yet, based on years of experience with God, I know that He will not come to me and say, “I’m going to have to be honest with you, Wally. You are more trouble to maintain than you are worth.” Although the statement is true and He would be honest to say it, He would never utter the words.

Most of us half expect God to be brutally honest with us, but He is not interested in that kind of honesty. His truth is contextualized with redemptiveness. He is interested in the kind of honesty that looks beyond our human folly to our earnestness and striving. He practices what He preaches as He sees us with “pure knowledge,” the heavenly view!

Joseph learned to know well the mind of God. He observed that, “While one portion of the human race is judging and condemning the other without mercy, the Great Parent of the universe looks upon the whole of the human family with a fatherly care and paternal regard; He views them as His offspring, and without any of those contracted feelings that influence the children of men.” (TPJS, p. 218)

Honesty is a principle God would have us apply to ourselves as we remember to return the borrowed book and deliver the promised help. Honesty must not be a premise for hurting each other. To call that honesty is the ultimate dishonesty. It is to call unkindness noble.

The mother described above might have taken her daughter aside privately. She might have expressed both her love and her concern. Then she could have invited the daughter to suggest how the concern could be resolved. The daughter could have wrestled with her own feelings and decisions while encircled in the arms of her mother’s love (See 2 Nephi 1:15).

God would have us treat His children as He treats us: kindly and redemptively. He asks that we do not dump out the load of each other’s faults and folly. We pick through the personal history to find hints of goodness and signs of hope. That is honest to His loving purposes. That is God’s kind of honesty.

If you are interested in discussing these or other family ideas, join us at the blog: www.drwally.org