Overcoming the Nothingness of the Natural Man | Meridian Magazine

Overcoming the Nothingness of the Natural Man 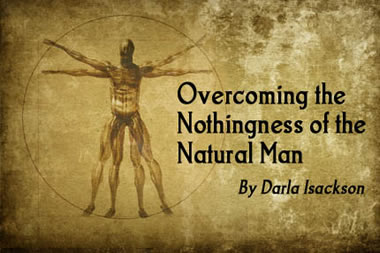 I’ve had plenty of experiences with feeling like nothing. In retrospect, most of them were directly related with some kind of disobedience, or with failure to feel and show charity. Let me give you some common, mundane examples – first of disobeying a “small” prompting.

One day I felt a distinct prompting to tighten the lid of the honey dispenser. My four little children had been especially demanding and I had ten things I still wanted to do to prepare for the Relief Society lesson I had to give the next day. I ignored the prompting. A second later I grabbed for the honey and was halfway across my carpeted kitchen before I realized I was leaving a trail of honey clear across the floor. I spent a half-hour sorely needed for other things on my hands and knees scrubbing honey and feeling stupid because I knew that even in this tiny thing the Holy Ghost had done his part to spare me this unnecessary clean-up-and I had not paid attention.

How many times have I experienced consequences far more spiritually significant than honey messes through my disobedience? Each time I disobey, I diminish my feeling of worth and increase my own sense of my nothingness.

All the elements obey; all God’s creatures obey. Only man is disobedient; only man is capable of feeling like nothing.

Obedience Always Increases Sense of Worth

Obedience, on the other hand, is the pathway to feeling like “something.” Obedience often brings experiences that remind us that God is mindful of us. One night I was driving on a dark country road about to cross an unmarked railroad crossing. Suddenly I heard an urgent voice in my mind that said “Stop!” I put on the brakes and sat trembling as a train rumbled past me – not two feet in front of my car. After calming myself, I thanked the Lord and felt an overwhelming sense of awe that He was mindful of me and desired to prolong my life for some purpose.

Another unforgettable example of that principle in my early life happened when I was eighteen. I was engaged and very much in love. My fiancé was leaving on a mission and I traveled to Salt Lake with his family to attend the farewell testimony meeting for departing missionaries in the Assembly Hall on temple square. Afterwards we saw him off at the train station just a few blocks away. (Yes, this was a long time ago and we weren’t breaking any rules!)

I knew it was right for him to go, no matter how hard the separation. I knew we were being obedient. I felt wonderful. When I accepted a mission call and bore my testimony in the same building and left from the same train station three years later, I felt that same swelling, transcendent feeling.

Obedience that leads to companionship of the Spirit is the best esteem builder known to man. And having the Spirit with us opens the door of our hearts to charitable feelings and actions.

The most scripturally prominent component of “somethingness” is charity. We are told several times in the scriptures that without it we are “nothing.” For example, 2 Nephi 26:30:

One day I went out to lunch with some friends. We got a waitress who was unfriendly and whose service left much to be desired. Soon the topic of conversation turned to her lack. I listened, then added fuel to the fault-finding fire. The very instant I did so I felt a distinct sinking feeling. I shrank. My light diminished. I felt small.

I later reflected on that feeling. I thought of the “nothingness” scriptures and somehow knew that as uncharitable actions multiply, they add up to nothingness. I suspect this is the common root of the self-worth problems in our dart-throwing, insult-trading society.

The political arena in regard to the upcoming election and the same-sex marriage debate are vivid example: uncharitable words and actions not only create division, but they also create deep inner unrest in all those participating. It really is true that there is no better way to feel like nothing than to act in unloving ways toward others. Without God, without the companionship of the Spirit that gives us charity, we are nothing.

Though I speak with the tongues of men and of angels, and have not charity, I am become as sounding brass, or a tinkling cymbal.

And though I have the gift of prophecy, and understand all mysteries, and all knowledge; and though I have all faith, so that I could remove mountains, and have not charity, I am nothing.

And though I bestow all my goods to feed the poor, and though I give my body to be burned, and have not charity, it profiteth me nothing.

Charity suffereth long, and is kind; charity envieth not; charity vaunteth not itself, is not puffed up,

Doth not behave itself unseemly, seeketh not her own, is not easily provoked, thinketh no evil;

Rejoiceth not in iniquity, but rejoiceth in the truth;

Is there any more perfect formula for happy living, for transcending our nothingness, than cultivating the Christ-like elements of charity?

Sweet Fruits of Charity in the Smallest Things

I remember a day when a clerk was absolutely snippy with me. How happy I am to be able to relate that this day I had the presence of mind to think about what often precipitates that kind of behavior. Perhaps someone close to her had died recently, I thought. Perhaps she had a sick child and wanted desperately to be with him or her instead of at work. Perhaps her husband had just left her. I looked at her kindly and said, “You must be having a hard time right now. I’m sorry.” The change in her countenance was amazing. She seemed to be fighting back tears and the rest of our interchange was filled with mutual kindness and appreciation. I left that store feeling ten feet tall.

Without charity we are nothing, but with it we are everything because we are “standing in” for the Lord, doing what He would do if He were there in that moment.

The power of charity is astounding. In a fear-shackled world there is no more important principle to consider. Mormon, in his epistle to his son Moroni said:

Behold, I speak with boldness, having authority from God and I fear not what man can do for perfect love casteth out all fear.

King Benjamin is one of my heroes and his great sermon to his people has often awakened my heart to spirit thing.

For behold, if the knowledge of the goodness of God at this time has awakened you to a sense of your nothingness, and your worthless and fallen state –

I say unto you, if ye have come to a knowledge of the goodness of God, and his matchless power, and his wisdom, and his patience, and his long-suffering towards the children of men; and also, the atonement which has been prepared from the foundation of the world, that thereby salvation might come to him that should put his trust in the Lord, and should be diligent in keeping his commandments, and continue in the faith even unto the end of his life, I mean the life of the mortal body –

He concludes this powerful discourse in verse 11-13:

And again I say unto you as I have said before, that as ye have come to the knowledge of the glory of God, or if ye have known of his goodness and have tasted of his love, and have received a remission of your sins, which causeth such exceedingly great joy in your souls, even so I would that ye should remember, and always retain in remembrance, the greatness of God, and your own nothingness, and his goodness and long-suffering towards you, unworthy creatures, and humble yourselves even in the depths of humility, calling on the name of the Lord daily, and standing steadfastly in the faith of that which is to come, which was spoken by the mouth of the angel.

And ye will not have a mind to injure one another, but to live peaceably, and to render to every man according to that which is his due.

We live in a world that cries for lack of kindness, that falters and fails for lack of charity. What a great service we can render by nourishing and developing these character traits in every contact with our fellow human beings.

In several powerful sermons, Book of Mormon prophets give us powerful reasons to seek charity in our lives.

And charity suffereth long, and is kind, and envieth not, and is not puffed up, seeketh not her own, is not easily provoked, thinketh not evil, and rejoiceth not in iniquity, but rejoiceth in the truth, beareth all things, believeth all things, hopeth all things, endureth all things. Wherefore my beloved brethren, if ye have not charity, ye are nothing, for charity never faileth. Wherefore, cleave unto charity, which is the greatest of all, for all things must fail – But charity is the pure love of Christ, and it endureth forever; and whoso is found possessed of it at the last day, it shall be well with him.

In verse 48 Moroni tells us how to get charity, and tops off the reasons we should want it:

Wherefore, my beloved brethren, pray unto the Father with all the energy of heart, that ye may be filled with this love, which he hath bestowed upon all who are true followers of his Son, Jesus Christ, that ye may become the sons of God; that when he shall appear we may be like him, as he is that we may have this hope; that we may be purified even as he is pure.

Each step of obedience to the laws and ordinances of the gospel, each time we obey promptings of the Spirit, we open the doors of our hearts to charity. We become charitable. We transcend nothingness and become something.

And the first fruits of repentance is baptism; and baptism cometh by faith unto the fulfilling the commandments; and the fulfilling the commandments bringeth remission of sins; And the remission of sins bringeth meekness, and lowliness of heart; and because of meekness and lowliness of heart cometh the visitation of the Holy Ghost, which comforter filleth with hope and perfect love, which love endureth by diligence unto prayer, until the end shall come, when all the saints shall dwell with God (Moroni 8: 25-26).

Alma gave us such a perfect example of the power found in obedience and charity. He said, “Yes, I know that I am nothing; as to my strength I am weak; therefore, I will not boast of myself, but I will boast of my God, for in his strength I can do all things; yea behold, many mighty miracles we have wrought in this land, for which we will praise his name forever” (Alma 26:12).

Alma was able to “do all things” because he transcended the nothingness of the natural man through obedience and charity. No loftier goal exists for Latter-day Saints.