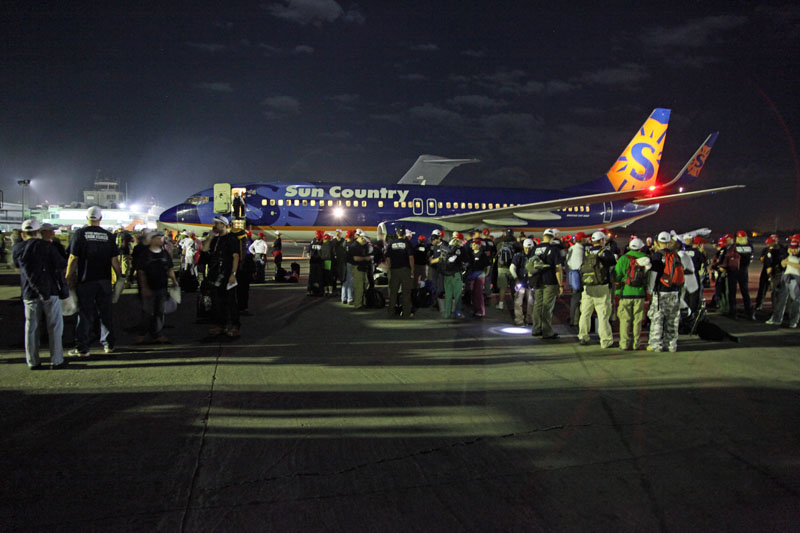 Whenever the Church mobilizes its members to clean up after a hurricane or earthquake, look for a lost child, walk precincts for a moral ballot issue, or join a community betterment project, it is a rare bishop or stake president who has not been asked, “How do you Mormons do it?”

Usually we mumble something about having wonderful members who are motivated to help others, protect sacred institutions, or make communities a better place to live, and so on.

Those observations are true, but we do not have a corner on such people. So why can we put 25,000 members in California knocking on doors with but a week’s notice, why can we organize a search party of hundreds within a matter of minutes, and how can we organize clean-up crews from eight or ten neighboring states to travel hundreds of miles to the Gulf Coast to help people, both Mormon and those of other faiths, clear hurricane debris and rebuild their lives?

I submit these successes rest upon three simple characteristics that no other denomination fully matches.

We are a top-down religion for doctrine and broad Church policies as the Lord reveals His will to the prophet who then counsels us accordingly.

We are also a top-down organization when it comes to putting gospel principles into practice at the local level, such as invitations to participate in specific activities from a bishop, an elders’ quorum president or leaders in the Relief Society.

I saw this happen when a student in the Stanford Ward became lost in the Santa Cruz Mountains after a ward-sponsored day-trip. As night fell, the sheriff’s department was notified and they told the Church to recruit as many people as possible to begin a search at daybreak.

Our residence received the call at 11:00 that night from our elders quorum president who, with his counselors and their counterparts in the Relief Society, methodically went down the ward list. At 6:00am the next morning, an unbelievable horde was available for deputy sheriffs to instruct and take into the wooded boonies. Within an hour the young man was found, cold but not bad off for wear.

The key was that we didn’t have to move laterally. The bishop did not have to spend time calling his counterparts in neighboring wards. All it took was a phone call to the stake president, thence down the line to bishops, priesthood leaders and auxiliary presidents at ward levels. As we prepared to return to our homes, the deputies told us, “We’ve had lost people from various denominations over the years, but we have never seen a bigger turnout of volunteers in a faster time than from you Mormons.”

With the exception of doctrine, Church-wide policies, and ordinances, we grant individual members substantial latitude to use their own initiative in pursuit of shared objectives. We teach the goals of the restored gospel and set them loose with D&C 58:26-28 as their guide:

For behold, it is not meet that I should command in all things; for he that is compelled in all things, the same is a slothful and not a wise servant; wherefore he receiveth no reward.

Verily I say, men should be anxiously engaged in a good cause, and do many things of their own free will, and bring to pass much righteousness;

For the power is in them, wherein they are agents unto themselves. And inasmuch as men do good they shall in nowise lose their reward. [Emphasis added.]

The term “magnify one’s calling” carries great meaning to members and is one of the reasons why Church organization has struck an optimal balance between verticality instruction and individual creativity.

Whatever address you have in the world, you will know what meetinghouse you should go to for worship services. You belong in a ward or branch; you belong in a faith family.

I am not aware of any major religion that draws congregational lines as we do. Most often those of other faiths are free to choose which church within their denomination to attend. And thus preachers from the same religion find themselves in competition with each other. Attendance waxes and wanes depending on the quality of the preaching and assorted blandishments.

This competition affects their volunteer efforts. Not a few ministers hesitate to ask their parishioners to join hands with those of other faiths or even those within their same denomination in a common volunteer cause because they’re afraid that someone might say, “You ought to come hear our preacher; he’s really good.

One is prickly about poachers when one’s paycheck depends upon putting posteriors in the pews.

By comparison, when was the last time you heard of an LDS bishop marketing his sacrament meeting services to members of a neighboring ward? It simply doesn’t happen. No bishop spends time or money enticing members from other wards to attend his.

Salary.com estimates that the median income for a pastor in the United States is $85,000 per year, which is definitely a high estimate. Payscale.com, on the other hand, says the average for all ministers is around $44,000. If these salaries were applied to the LDS bishops and branch presidents in the approximately 14,000 wards and branches in the United States, that would mean between $62 million and $119 million would be spent just to put rice and beans on their tables and roofs over their families’ heads.

And our outlay would not stop at bishops; counselors, heads of auxiliaries, and even organists or choristers, jobs that are common on many denominations’ payrolls, would agitate for a share. Assuming we limited salaries to five key people in each ward and paid the lowest of the salary estimates, we would still shovel out over $300 million per year just to feed and house our clergy in the United States alone.

Think how many meetinghouses and temples could be built for that amount!

While other denominations waste money on a paid clergy doing everything, we give every member a little something to do, but with no monetary pay, and we rotate the most time-consuming callings, such as bishoprics and stake presidencies. Our 180-year tradition of everyone having a calling has fostered a unique Mormon work ethic – a participatory instead of an observational state of mind – that other organizations can only salivate for.

Thus when volunteers are needed, leaders need only describe the goal and point us in the right direction. Because we are participating members instead of pew potatoes, we do not need to be persuaded that volunteerism is good.

Having an unpaid clergy is a tremendous blessing, and it accelerates the growth of the Church.

So here we are – vertical, geographic, and unpaid. Overlay personal testimonies of the truthfulness of this, the re-established original Christian church, and you have a motivated membership that is a wonder to watch.

Because we Mormons were driven out of four states and almost a fifth, we have carried a sort of collective inferiority complex ever since. Enough already! Simply and (pardon me) immodestly put, we have the most perfectly organized religion on the face of the earth. Enjoy it.