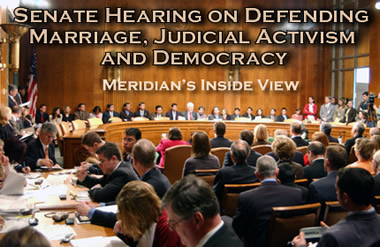 The Senate Judiciary Subcommittee on the Constitution is headed by Senator John Cornyn of Texas.  To read his opening remarks, click here.

While a number of local officials from California to New York are flouting the law in the name of same-sex marriage and the Massachusetts marriage decision has people in an uproar, at a Senate hearing, Wednesday, U.S. Senator Russ Feingold (Wisconsin-D) said something amazing.

“Proponents of a federal marriage amendment say that traditional marriage is under attack.  They would have the American people believe that there is a national crisis and that renegade judges have run amuck over the will of the people, the laws, and the Constitution. Nothing could be further from the truth.”

Even as he spoke, same-sex couples in Portland, Oregon lined up for “marriage” licenses as the county started issuing them, though Oregon’s governor questioned its legality. Lawlessness on this issue could spread like a wildfire.

Sen. Feingold, a ranking member of the Senate Judiciary Committee claimed he had better things to do than come to a hearing on the implications of the Massachusetts ruling on traditional marriage or examine the possibility of a Constitutional amendment.  “I am concerned that this Subcommittee is again focused on a remote, hypothetical issue, when there are real problems facing American families today.”

He said he had unnecessarily interrupted his meeting with the Wisconsin National Guard to come to the hearing-and he’d far rather be with the guard. Nobody really cares about this issue, he claimed.

Maggie Gallagher, President of the Institute for Marriage and Public Policy, is a powerful voice for the family.

In reply, marriage proponent and syndicated columnist Maggie Gallagher said, “I don’t think you could say that giving two hours every six months to explore the future of marriage is excessive.”

Dynamics of a Senate Hearing

It is not just the future of marriage, but the future of the nation that is at stake in the marriage drama being played before us, and already the players have their lines.  Sen. Feingold pretends that same-sex marriage is a remote possibility even though San Francisco’s mayor is issuing marriage licenses. He said it is a ho-hum issue, but that it has been brought in an election year as a “political ploy” to divide the nation-an assumption that it touches the people’s passions.  He implies it is excessive and extreme to be concerned about losing traditional marriage at the same time he pushes for a new definition of marriage.

Beyond the posturing, however, the battle to define the meaning of marriage has begun and Senate Majority Leader Bill Frist said that Congress “must act and act soon” to prevent a few judges and local officials from redefining marriage for everyone.

“We didn’t seek this fight, and we don’t relish it,” he said. “But the courts have brought it to us, and the people will respond. We will not let activist judges redefine marriage for our entire society.”

The hearing room had many children.

People who care passionately about this issue on both sides crowded into the hearing room on Capitol Hill. Lesbian and homosexual pairs, many sporting little children, had flown in from across the nation, hoping to make a statement by their presence, thinking the press might interview them.

A Senate hearing is a kind of theater, an orchestration for each side of the debate not just to give compelling argument but to find witnesses who drive the point home by their very presence.  It gives a sense of things to come.

Jon Bruning, the Attorney General of Nebraska, said his office is defending a federal court challenge to the portion of the Nebraska’s constitution that defines marriage as a union between one man and one woman.

“In 2000,” he said, “more than 70% of Nebraskans voted to amend the Nebraska Constitution to define marriage as a union between one man and one woman.  In 2003, the ACLU and Lambda Legal Foundation together sued Nebraska in federal court, arguing that the Nebraska amendment unconstitutionally denies gay and lesbian persons equal access to the political system.  This is the first federal court challenge to a state’s DOMA law.

“My office moved to dismiss the suit, but last November, the Court denied our motion to dismiss.  The language in the Court’s order signals that Nebraska will very likely lose the case at trial.”

Citing two Supreme Court cases, Lawrence v. Texas, Romer v. Evans and the recent Massachusetts v. Goodridge, Bruning said these cases “demonstrate the real possibility of the courts mandating national recognition of same-sex marriages.  Many well-respected legal scholars, including Harvard Law Professor Laurence Tribe, agree that this issue eventually will be resolved by the federal courts.  In short, this country is heading down a path that will allow the judiciary branch to create a national policy for same-sex marriages.

Bruning, perhaps more than any other state official, is learning what that means.   Seventy percent of the people of Nebraska couldn’t stop it.

“The ultimate question for you, as members of the United States Senate, is whether you believe this issue should be resolved by judges or by the American people through you, their elected representatives.”

“I am here because of the reality that four judges in Massachusetts could eventually invalidate Nebraska’s ban on same-sex marriages.”

Opponents to an amendment say that the issue should be handled on a state-by-state basis. Lea Brilmayer, a professor of international law at Yale Law School, said she doesn’t think that the Constitution’s Full Faith and Credit Clause will mandate that other states will be required to accept Massachusetts’ same-sex marriages.  She said that states have had different marriage laws for years, and they have been allowed to handle the issue on their own.

Senator Cornyn questions Professor Lea Brilmayer about her own book.

However, Sen. John Cornyn asked if the public policy of the state itself was challenged for its constitutionality, wouldn’t that make a difference and force states to acknowledge the same-sex “marriages” performed in other states?

Nebraska’s legal battles demonstrate that the answer is yes. State constitutional amendments are vulnerable.  State statutes are at risk.

Click here to continue reading Meridian’s Inside view of this Senate Hearing.