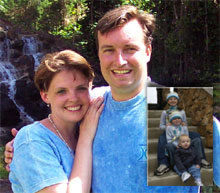 Winning the Battle and Not Knowing It: The Good, The Bad, and The Ugly of 2003

Winning the Battle and Not Knowing It:
The Good, The Bad, and The Ugly of 2003

It’s not the battle for Helm’s Deep; it’s nothing like the siege of Minas Tirith; but it is a battle nonetheless.  An apt couplet might run: “none of the bloodshed, all of the excitement.”  The clash between Mormon and anti-Mormon forces goes on.  Here are the latest dispatches from the battlefront.

DNA and the Book of Mormon

By all accounts the top story of 2003 has been the debate over DNA studies and the Book of Mormon.  The story broke in late 2002, when Thomas Murphy, a member of the church and professor at Edmonds College in Washington state published a controversial article concluding that “the Book of Mormon is a piece of 19th century fiction.”

Press circles picked up on the story as news spread of a disciplinary council to be held for Brother Murphy and his wife.  The media angle was pretty easy to foresee: “Mormon Scholar Quashed, Excommunicated for Paper Refuting Book of Mormon Authenticity.”  The Stake President delayed the council and reporters swarmed again: “Murphy Victorious; Case Closed”.  The real story behind this event, however, is far more complex and interesting.

It was revealed that Thomas Murphy had been an inactive member of the church for nearly a decade, a point which Murphy conceded, adding “but I’m very active in the Mormon intellectual community.” [1]   After further research, Allen Wyatt and others at FAIR discovered that the PR force behind the story was being driven by prominent anti-Mormon groups.  FAIR further discovered that Brother Murphy likely contacted these groups directly.  (read the story here)

As for the scientific charges against the Book of Mormon, there have been many articles refuting both Murphy’s conclusions and his assumptions.  In January, Meridian published an rebuttal by Brant Gardner from FAIR entitled: “The Tempest in a Teapot: DNA Studies and the Book of Mormon”  Gardner demonstrates that Murphy’s efforts to equate all Native Americans as descendants of the peoples of the Book of Mormon is deeply flawed.  Scott Woodward, a Professor of Microbiology at BYU has also made some excellent remarks on the subject which you can view online.  Other studies at FARMS have pointed out the holes in Murphy’s theory.

In short, these responses have demonstrated that Murphy is relying on an intercontinental reading of Book of Mormon geography.  Most scholars in the church have concluded that the events of the Book of Mormon took place in a relatively limited geographic setting.  With this conclusion, the assumptions of Murphy’s analysis fall apart.  Furthermore, the research that Murphy enlisted was not his own, nor was this data collected to address historic genetics.  In the end, the evidence Murphy cites relies on a stringent hemispheric view of Book of Mormon demographics with assumptions that would not pass the muster of any scholarly review as others have noted.

On the positive side, this episode has furthered the discussion among members of the church concerning the true origins of the Book of Mormon people.  The general assumption that all Native Americans are descendants of the Lamanites has long been challenged by scholars within the church.  The church has not taken a definitive stand on the issue, nor should it, since the motive of the Book of Mormon is primarily a spiritual one.  But the challenges posed by opponents of the church should be readily examined.  The responses from various groups to the events around Thomas Murphy are a shining example on how to approach these types of challenges.

As a writer, I can envision myself writing about all sorts of topics.  I have a certain penchant for writing about anti-Mormon literature but I’m mostly an informer and analyst, I wouldn’t deem to admit any deep scholarly knowledge.  That being said, the pitfalls of a novelist-atheist-adventurer turned theological commentator should be obvious.

Jon Krakauer has attempted just this in his latest book “Under the Banner of Heaven: A Story of Violent Faith.”  Krakauer’s book is a general attack on religion and a very specific attack on The Church of Jesus Christ of Latter-day Saints.

The First Presidency thought the publication a big enough event as to issue a special press release.  As Mike Otterson, Director of Media Relations for the Church stated:

This book is not history, and Krakauer is no historian. He is a storyteller who cuts corners to make the story sound good. His basic thesis appears to be that people who are religious are irrational, and that irrational people do strange things.

Richard Turley has produced a very telling review of the book detailing the deficiencies in Krakauer’s research, the prominent biases in his analysis, and his unsupported conclusions.

Trouble on the Plaza

By most accounts, General Conference in October 2003 saw the most active anti-Mormon display in a very long time.  This increased activity was likely prompted by the church obtaining and developing the new Church Plaza, formerly a part of Main Street.

A quick review: the Salt Lake City Council asked the Church if they would turn the stretch of Main Street into a green space.  The Church agreed, and paid $8.1 million for the land, a top dollar figure by any measure.  Some prominent anti-Mormon figures brought a lawsuit against the church and Salt Lake City claiming a first amendment right to protest on the Plaza.

In late 2002, the 10th Circuit Court of appeals overturned a previous ruling and sided in favor of the plaintiffs and the ACLU. The court said the city cannot have public access on the plaza while forbidding certain types of speech or other First Amendment protections. The mayor and council then revamped the offer permitting the Church full private rights for the Plaza in exchange for 2 acres of land in Glendale, UT, where a community center is to be built.

The ACLU has gone back to court claiming that the plaza is a public park and asking a judge to rule finally on the Plaza issue.  A ruling is expected shortly.   Meridian has followed these incidents carefully.

Would that protestors confined themselves to such oral objections. Sadly, disgraceful desecration of Temple garments and even physical harassment have become the norm for conference attendees.  At the 2003 October conference, two members of the church were arrested after taking the garments away from a protester.  The church is proposing a possible buffer zone for the upcoming April General Conference.  For a closer look at the conference protesters and responses to their claims against the church click here.

In short, 2003 was a busy year for anti-Mormons and busier year for anti-anti-Mormons.  With new publications and other efforts underway, 2004 is already shaping up to be an exciting year.  Well, back into the fray.

You can read Justin’s previous dispatches below:

Winning the Battle and Not Knowing It