The Natural Family: A Manifesto Finally, an Agenda for Us | Meridian Magazine

The Natural Family: A Manifesto Finally, an Agenda for Us 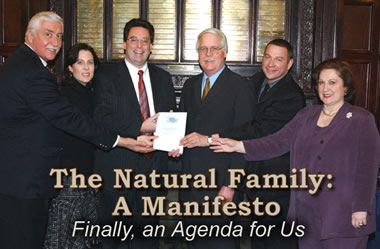 A few days after the November election, when the pundits were still shaking their heads at the “values vote,” CNN’s Aaron Brown, interviewing a pro-family leader said, “OK, I get the ‘same-sex’ marriage issue, but what else does your movement want?”

For too long, social conservatives have had no clear answer to that question, so they have been on the defensive – only knowing with great clarity what they don’t want.  They don’t want families to fall apart; they don’t want pornography assaulting them; they don’t want religion to be trampled out of the public square.

They’d like to stand fast, hold tight, hang on against a moral erosion that they hadn’t anticipated – and even still don’t quite believe.  Yet, as they helplessly feel the sand dissolving under their feet, they still don’t know what to stand for.

This has been debilitating to the pro-family movement.  Radical feminists, homosexuals, environmentalists – everybody has a coherent agenda that they have been persistently enacting in society with pointed success, but not proponents of the natural family.

They have taken it for granted that concepts like mother, father, husband and wife could never be threatened and that it was a given that parents were empowered to guide and teach their children. Why do you need an agenda to preserve something you don’t realize is endangered?

It’s no wonder everything we value has been, like a glacier, on the retreat for so long.  Family-centered people have been halting and unsure before the onslaught to their values.

Now, Paul Mero and Allan Carlson have said, “Enough is enough” and have published The Natural Family: A Manifesto.  It’s more than an agenda.  It’s a public declaration of principles and intentions – especially of a political nature, a road map to the future for those who value marriage and family.

Allan Carlson said, “The best manifestoes provide a coherent ­worldview, including an understanding of historical circumstance (‘How did we get here?’), a vision of the world being sought, a clear statement of principles, the identification of allies and foes, and an agenda for action.”

When Mero and Carlson announced their Manifesto at a recent Washington D.C. press conference, they claimed they were writing from the perspective of two men “who share a deep concern for our children, our nation, and our civilization.  We cannot claim the backing of any political party nor do we speak as the leaders of large organizations.”

Despite the modesty, Mero, president of the Utah-based Sutherland Institute, and Carlson, president of The Howard Center for Family, Religion and Society have been warhorses in the arduous work of defending family for years and key movers behind the World Congress of Families.

In the Manifesto, Mero and Carlson, “advance a new vision and a fresh statement of principles and goals appropriate for the 21st century and the third millennium.

“We see a world restored in line with the intent of its Creator.  We envision a culture – found both locally and universally – that upholds the marriage of a woman to a man, and a man to a woman, as the central aspiration for the young.  This culture affirms marriage as the best path to health, security, fulfillment and joy.  It casts the home built on marriage as the source of true political sovereignty, the fountain of democracy.”

We will build a new culture of marriage where others would define marriage out of existence.

We will welcome and celebrate more babies and larger families, where others would continue a war on human fertility.

We will find ways to bring mothers, fathers, and children back home, where others would further divide parents from their children.

And we will create true home economies, where others would subject families to the full control of big government and vast corporations.

To do these things, states the Manifesto, “we must offer positive encouragements,” but also “correct the policy errors of the past,” which have ground away the foundations of the family.  Policy errors abound.

The Manifesto paints a sweeping vision.  Schooling that will give positive images of chastity, marriage, fidelity, motherhood and fatherhood, and stop the “corruption of children though state ‘sex education’ programs.  Ending “the war of sexual hedonists on marriage.” Building “legal and constitutional protections around marriage as the union of a man and a woman.  “Ending the coarsening of our culture.”

Each area of focus is spelled out in detail.  The Manifesto advocates restoring respect for life, ending the culture of abortion, ending government campaigns of population control, crafting generous tax deductions, exemptions and credits tied to marriage and children, ending discriminations against stay-at-home parents.

“Through all these tasks,” they affirm, “we seek to advance true freedom.  The partisans of a ‘post family’ world have taught that liberty means freedom from tradition, from religion faith, from family, from community.  They also hold that freedom is a gift of the state.  We deny these statements.”  Rather, true liberty comes from the ability of human beings, of women and men, to find their real destinies, in their ability to live in harmony with the created world.”

Like the last scene in Casablanca where the police inspector asks his subordinate to “round up the usual suspects,” Mero and Carlson anticipate the charges against their manifesto.  “Some will say that we want to turn back the clock, to restore a mythical American suburban world of the 1950’s. Others will charge that we seek to subvert the rights o women or that we want to impose white, Western, Christian values on a pluralistic world.  Still others will argue that we ignore science or reinforce patriarchal violence.  Some will say that we block inevitable social evolution or threaten a sustainable world with too many children.”

To these charges, Mero and Carlson say they “look forward with hope, while learning from the past,” that they “believe wholeheartedly in women’s rights,” that they “believe the natural family is universal, an attribute of all humankind,” that they not only celebrate the findings of empirical science, but that science confirms that “children do best when they are born into and raised by their two natural parents.”  They seek to “reduce domestic violence,” and look toward a “sustainable future.”

Though society’s changes in the last years have followed a ghastly momentum, the Manifesto traces a history of gradual erosion of the family, punctuated by world wars, the industrial revolution and new ideologies hostile to the family.  “New ideas emerged . that rejected the natural family,” note Mero and Carlson.  “Some political thinkers held that the individual, standing alone, was the true cell of society; that family bonds – including those between husband and wife and between mother and child – showed merely the power of one selfish person over another.

Other theorists argued that the isolated self, the “lone actor in “the state of nature,” was actually oppressed by institutions such as family and church.  In this view, the central state was twisted into a supposed agent of liberaion.  It alone could free the enslaved individual from “the chains of tradition.

The Family Manifesto appeared with praise from family advocates and a yawn from the press.  The chairs at the National Press Club were largely empty for the press conference announcing the manifesto, which paints a long-needed agenda for the family forces.  Yet, other colleagues in this battle weighed in immediately.

Rabbi Daniel Lapin of Toward Tradition said, “The Family Manifesto is nothing short of a blueprint for western survival.  The durability of our culture and its peace and prosperity will never be seriously jeopardized by outside threats.  The only real perils our future faces are the forces eroding the foundations of marriage and family .The Family manifesto is not only a blueprint for survival, it is a bugle call.”

Bugle call or not, it will take daunting work and a long vision, to adopt the manifesto and see any of its tenets take hold.   Neither Paul Mero nor Allan Carlson has a large grassroots organization to spearhead a campaign, and the conservative intellectual and political movement in America is often asleep where family values are concerned.

The Manifesto also acknowledges that the so-called pro-family and pro-life movements have been marred by weaknesses and ineffectiveness.” Too often individual ambitions and squabbles have prevented movement success.  A narrowness of vision has led, at times, to a focus on petty questions, while the truly important battles have been ignored, and so lost by default.  Strategic thinking and bold moves that could transform key debates have been undone by timidity on the part of leaders and funders.”

Paul Mero and Allan Carlson write, “A new spirit spreads in the world, the essence of the natural family.  We call on all people of goodwill whose hearts are open to the promptings of this spirit, to join in a great campaign.

“The time is close when the persecution of the natural family, when the war against children, when the assault on human nature shall end.”

It’s a bold proclamation-that will require people of good will everywhere to step forward.  Mero and Carlson hope they will.