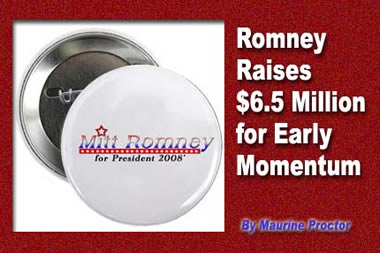 Political races are often about early money. Who can jumpstart a campaign with a momentum of dollars that declare a candidate a front-runner, the one to be contended with?

Mitt Romney gathered nearly 400 of his supporters into the Boston Convention Center on Monday for a unique National Call Day that generated $6.5 million and put contenders on notice that this is a campaign with muscle and energy.

The 38,000 square-foot Boston Convention Center was dressed for a national pep rally. Flags from all 50 states festooned the callers and a four-screen projection TV system hung from the center of the hall with pictures including Romney in the Oval Office and at the Presidential lectern. At the heart were the array of volunteers at 42 fundraising stations – each with a supervisor and nine volunteers.

The callers were a star-studded group including eBay President Meg Whitman, former Massachusetts Governor William F. Weld, Missouri Governor Matt Blunt, and Rep. Rick Lazio (R-N.Y.), who plumbed their own personal lists and their network of friends to ask for donations. Romney campaign spokesman Kevin Madden told The Boston Globe, “While you see every one person here at the phone, what’s behind them… [are] legions of other people and other supporters that they’ve worked with.” .

“We do know in political fundraising, money talks but early money screams,” he said. Governor Romney made the first call of the day to his oldest sister, Lynn, who lives outside Detroit. She said, “This is an exciting day, isn’t it?” as she pledged $2,100, the maximum allowable contribution.

The volunteers hailed from more than 40 states and used 320 laptop computers to send messages like these to their friends: “I wish I could describe to you the energy and electricity in the room right now with a literal Who’s Who list from across America manning the phones and calling their friends and associates to contribute today. Those who were involved in the last two Bush/Cheney campaigns have told us that the kind of support Mitt is getting is unprecedented. “I would like to personally invite you to be among the very first to make a contribution to Governor Romney’s presidential campaign.”

Hugh Hewitt, who is a Romney fan, noted, “There is a dynamic in politics that always sees money follow momentum. Don’t be surprised if the early money breaks to Romney as smart money likes to be with the eventual nominee early, and also to be part of the team from its first days. This is what distinguished George W. Bush’s campaign in 1999-2000.”

The top priority for any candidate is to raise big dollars for what is estimated could be the first $1 billion presidential campaign.

The resounding success of the day “is a message,” said Governor Romney, “that what we stand for and what we are going to fight for has been heard, and gives us motivation to go forward with our message.”

Money was only part of the momentum of Romney’s first days since he formed his presidential exploratory committee. Opinion Journal is currently running an online unscientific poll that asks, “Who would be the strongest candidate for Republicans in the 2008 presidential election. Here are early results:

David Frum has written an article for the American Enterprise Institute for Public Policy called, “Could This Man be the Next U.S. President?” that indicates why people become impressed with Mitt. He writes:

The Republican presidential field for 2008 is led by one of the nation’s greatest military heroes, a seasoned senator, one of the most famous and best-liked men in America. Running hard alongside him is the most successful mayor in American history, the man who saved New York City from crime and defended it from terrorism. And the third front-tier candidate is… a one term governor of Massachusetts.

How did this happen? How can it be that Governor Mitt Romney has come to be seen as one of the top three contenders for a presidential nomination? Romney has benefited from the secret issue in the 2008 presidential race: competence.

Amazingly, though, hardly any of the leading 2008 candidates have ever run anything bigger than a senator’s office. John McCain? The former pilot, congressman and senator has zero administrative experience. Hillary Clinton? She had a good view of how the White House is run – but no responsibility for running it. Barack Obama? A former community activist, state legislator and two-year veteran of the U.S. Senate – zilch. Al Gore? He’s in the same situation as Hillary Clinton. Tom Vilsack, the Democratic governor of Iowa, and Mike Huckabee, Republican governor of Arkansas, are both super long shots.

In fact, only two candidates in the race have ever successfully managed a large organization: Rudy Giuliani and… Mitt Romney.

Giuliani’s record everybody knows. It could well be argued that he is the greatest public-sector executive in the United States. But his personal history is messy, and he holds views on issues like abortion, immigration, same-sex marriage and gun control that may give Republican primary voters serious pause. His own recently leaked secret campaign documents express serious doubt whether he will in the end decide to run at all.

Romney’s record is not so well known as Giuliani’s. But in its own sphere, it is as impressive. In 1984, Romney launched a venture capital firm that funded, among other successes, a startup called Staples. Over his 14 years at the firm, he earned an annual return of 113%. When the 2002 Olympics tumbled into scandal and financial crisis, the state of Utah called on Romney – and the games finished with a US$100-million profit.Romney had unsuccessfully challenged Ted Kennedy for a Massachusetts Senate seat in 1994. In 2002, he ran for the governorship. He inherited a US$3-billion deficit; over the next four years, he balanced the state’s budget without raising taxes.

No major presidential candidate other than Rudy Giuliani can tell a story of practical problem-solving like this. It is exactly the kind of story that Republicans – and Americans – yearn to hear. And that’s why (of all unlikely things!) a Mormon from Massachusetts is emerging as a candidate to watch in 2008. Read the entire article by clicking here.

Challenging Governor Romney for the conservative vote are Senator Sam Brownback of Kansas, former Governor Jim Gilmore of Virginia and Governor Mike Huckabee of Arkansas, who are all considering presidential runs. However, according to The Boston Globe, “Observers say that if Romney can continue doing what he did yesterday, tapping into that infrastructure to raise millions of dollars, he could position himself as the one viable presidential candidate most palatable to conservative voters.