Way To Go Jordin Sparks! Standing Up For Chastity 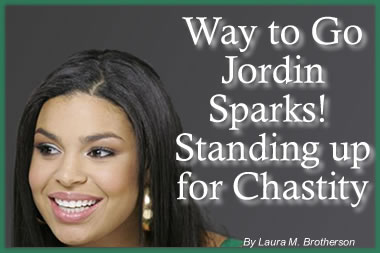 Can I just say how infinitely impressed I am with Jordin Sparks, former American Idol winner. Though she has a great voice, it’s not even her singing talent that I’m so impressed with at the moment. It’s her courage and her conviction that has me cheering. She’s got guts! I love it!

Jordin Sparks initially sat through a verbal bashing of promise rings, which she wears, until she’d had quite enough. The MTV Video Music Awards show host was having quite a heyday at the expense of those who actually believe it’s a good idea to save sex for marriage.

As a promise-ring wearer herself, she didn’t appreciate the host castigating the Jonas Brothers for their promise rings. So, when it was Jordin’s turn to speak, she took advantage of the opportunity to counter his rant with a simple statement that clearly said, “Enough!”

I’m also kind of tired of those of us who think it isn’t “nice” to talk back and don’t. Our silence contributes to the flood of filth. I just love it when people stand up publicly for that which is right.

Sure we can learn what’s good and decent at home, and in church, and from our friends and neighbors. But the mass media has such an overwhelming influence that it’s not enough for us to let them have free reign as to what they try to put on us as being normal and acceptable.

Not everyone has the opportunities to offer an alternative to the media model. I guess that’s why I’m so proud of Jordin Sparks. I know she’s not perfect, and will likely make some mistakes, but it’s just so great that someone who has to live and breathe the Hollywood air can still keep their mind clear on what’s what. She’s a smart girl, and her courage and conviction have allowed her to make even a small a difference in the moral decline of our culture.

It’s interesting that research shows that teens with higher IQs make the decision to pass on premarital sexuality. Smart kids, among other things, tend to be committed to long-term educational and career goals, which has the amazing power to help them overcome temptations.

I think smart kids also do other smart things like not hanging out in questionable places, nor getting into situations where temptations are great. Jordin too says she tries to stay away from clubs and other such things. Smart girl.

She obviously has good parents who have taught her well about things that really matter. As she stated in a recent television interview, when her parents explained things to her about the birds and the bees, she said it just made sense that she would wait for marriage. Smart girl.

Smart parents make sure they too talk with their kids regularly about things that really matter, and help them make decisions day-to-day that will allow them to create the kind of lives they want to have.

Most religious parents have already turned off the television, and they turned off MTV a long time ago, for that matter. But as long as good, God-fearing people stay out of the public debate, then society will remain mired in filth, as morality continues to crumble.

Jordin Sparks may not win any popularity contests in the liberal media with the stand she has taken, but if she sticks to it she will win where it really counts.