Defeating the Anti-Family Agenda at the United Nations | Meridian Magazine 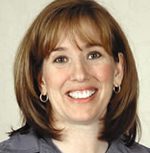 Defeating the Anti-Family Agenda at the United Nations

Having just returned from participating in the United Nations Commission on the Status of Women (CSW) negotiations, I am convinced more than ever that what happens at the UN really matters to all of us.  At this conference, United Families International representatives played a significant role in defeating several anti-family provisions — including the promotion of abortion rights, sexual rights for girls as young as age 10, and the homosexual agenda. 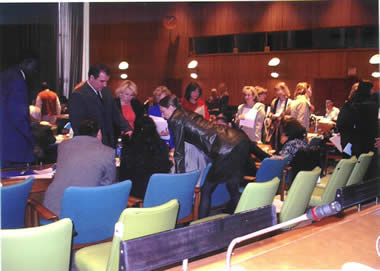 The document proposed for negotiation at this meeting was essentially a radical feminist wish list titled, “The Role of Men and Boys in Achieving Gender Equality.” This two-page document used as a basis for the negotiations quickly grew to six pages, and what started out bad became even worse as each new proposal was added for consideration.

Almost every paragraph mandated that governments and men and boys as individuals promote the rights of women and girls in every way imaginable.” The European Union (EU) put forth a proposal to promote discussion “on issues surrounding masculinities, relationships and sexualities” (which nobody could figure out,) and most paragraphs called for mandatory participation of men and boys in the promotion of gender equality and gender mainstreaming.

There were proposals from the EU and Canada calling for men “to respect the sexual rights and reproductive rights for women and girls,” which is UN code language for abortion rights. Language was proposed to reiterate or reaffirm the “Report of the Expert Group,” and the “Report of the Secretary General,” which was a deceptive attempt to have the CSW endorse reports that promoted homosexuality and abortion.

There was an onslaught of proposals that would force member states to recognize radical rights and encourage quotas for women in all spheres of government, political, social, and family life. One provision that was advanced even sought to dictate the “equal sharing of household responsibilities between men and women- as if the UN’s mandate is to dictate family roles.

We found it ironic that the document recognized men’s violent roles as perpetrators and yet, on the other hand, called for the development of “programmes for training and recruitment of men in early childhood education and caregiving occupations.”

United Families International representatives, along with other pro family coalition members, clearly had our work cut out for us. How were we to take a bad document —  with so many pitfalls and problems – and make it acceptable?

Fortunately, the U.S. delegation was on our side of the issues (a big change from the Clinton Administration when the U.S. delegation advocated these kind of terrible proposals), and there were several other UN delegations that worked closely with us to prevent the accepted document from becoming a real disaster.

First off, we gathered the pro-family NGO troops and analyzed the document line by line. We then created a CSW Negotiating Guide for the delegates outlining the trouble spots in each paragraph along with suggestions for deletions and word changes and questions that should be asked to clarify deceptive or ambiguous undefined terms. We then distributed the guide to the pro-family delegates we had identified.

It was gratifying to note the numerous times throughout the negotiations when UN delegates quoted from our CSW Negotiating Guide or other information we disseminated on the UN floor in successfully defeating bad provisions and supporting the inclusion of better language.

Same Sex Marriage and the Disappearance of Mothers and Fathers

The light really came on for me when I saw staunch opposition to a U.S. proposal to “promote the understanding of the importance of both fathers and mothers to the well-being of women and girls.” The delegate from Ireland, speaking on behalf of the European Union, opposed the language, stating that the terms “mothers” and “fathers” were “too limiting” and requested they be replaced with “women” and “men.” When several delegates suggested the addition of “legal guardians” and “care givers” to make the language more inclusive, this still did not satisfy the European Union. They insisted on replacing “mothers” and fathers” with “women” and “men,” and this became a point of contention throughout the negotiations. Eventually, it passed in a diluted form with the addition of legal guardians and care givers. 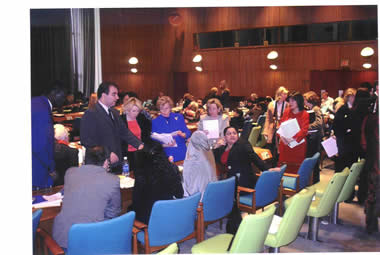 Who would have thought that we would come to a day when recognizing mothers and fathers would be politically incorrect and considered downright offensive by some? The EU also moved to have the word “both” removed when modifying “parents.” Are you catching on? If the UN recognizes the unique role of both parents — a father and a mother — then they discriminate against same-sex partners who can never provide a child with both a father and a mother.

These UN negotiations are a microcosm of what is now happening and which will increasingly happen to our society and our culture if we don’t take action. Respect for the unique and complimentary roles played by mothers and fathers in family and society could be lost. In fact, if same-sex marriage is legally sanctioned in the United States it may eventually become illegal to publicly promote the importance of both mothers and fathers in the lives of their children without risking accusations of discrimination from same-sex couples. It is not too farfetched to predict that just as surely as references to God are being systematically removed from the public square so as not to offend atheists, references to the importance of both mothers and fathers in the life of a child will be systematically removed so as to not offend homosexuals.

UFI representatives found a citation from the UN CEDAW Committee criticizing the country of Belarus for holding a Mother’s Day, to show the delegates that motherhood is considered by some to be a negative stereotype. Thus, the language calling for the revision of textbooks and curriculum to eliminate gender stereotypes needed to be removed or defined. Our efforts had a great impact on the negotiations on this point and, after heated discussions, the wording was removed.

We also distributed information to delegations asking them to demand definitions for words like “masculinities” and “sexualities.” We provided them with the Oxford Dictionary definition of sexualities, which included: “Identifying one’s sexuality sexual desire, sexual appetite, sexiness, carnality, physicalness, eroticism, sensuality, sexual orientation, or sexual preferences.” After the delegate from Sudan read the definition from our flyer on the UN floor, the wording was removed by the delegations that could not openly countenance the promotion of homosexuality and promiscuity once it was brought to light.

Delegations promoting “reproductive rights” and “sexual rights” for women and girls deceptively insisted that the terms do not include abortion. We distributed additional information from the UN CEDAW committee criticizing several different countries for not promoting the reproductive or sexual rights of women, which they defined to include abortion. This helped defeat the abortion provisions as well.

The radical social engineers who have entrenched themselves into the UN system have made huge inroads. These UN negotiations were fraught with proposals to “eliminate gender stereotypes” and one proposed paragraph went so far as to encourage the acceleration of a “socio-cultural change towards gender equality, through the upbringing and the educational process, in terms of changing harmful attitudes and traditional perceptions of male and female roles.”

This paragraph appeared acceptable to everyone when viewed only through the lens of women’s rights. However, when viewed through the lens of homosexual rights (the document was about the role of men and boys), it takes on an entire new meaning. Gender, as defined by the UN, is not the sex you were born with — male or female.  Instead, it is merely a social construct, or in other words, it is your chosen sex role, whether that be male, female, transgender, bisexual, or homosexual, regardless of what sex you were born.

At one point the chairperson said that school curriculum cannot show girls playing with dolls. The delegate from Sudan responded, “But girls do play with dolls in my country.”

Could it be that radical feminism is what has led to widespread cultural acceptance of homosexuality? Have we de-masculanized men and masculinized women to such an extent in our quest for gender equality that the pendulum has swung dangerously too far? These are the kinds of questions that one begins to ask while wandering the halls of the UN trying to figure out how the world has gotten into such a mess.

What Happens at the UN Matters

Based on my experiences at this and dozens of other UN conferences, there is one thing of which I am certain. What happens in these UN conferences matters and has an impact on families in the U.S. and around the world.  The international norms and standards created and defined in these conferences either directly or indirectly impact the laws and policies of all nations. Member states commit to implement the provisions in the documents they negotiate. UN compliance committees monitor implementation and review reports from member states. More and more U.S. judges are looking to these international norms and policies to support their radical decisions.  A case in point: these international norms and standards were cited by the majority in the U.S. Supreme Court decision last summer overturning Texas anti-sodomy law.

UFI is one of the few pro-family organizations regularly monitoring UN developments and having a major impact on these negotiations. We will continue in what appears to be a never-ending battle at the UN to defend the family by promoting respect for marriage, life, religion, parental rights and responsibilities, and national sovereignty.  But, we are a membership-supported group and our effectiveness depends entirely on the support and generosity of our members. These stepped-up attacks at the international level, as well as our increased activities to defend marriage and the family in the U.S. and Canada, have severely strained our budget.