A Tour of the Draper Utah Temple | Meridian Magazine

A Tour of the Draper Utah Temple 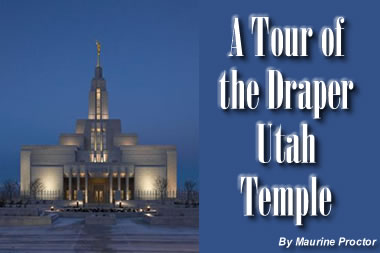 All Photos are © 2008 Intellectual Reserve, Inc. All rights reserved.

The towering Granite spires of the new Draper Utah Temple sits in the southeast corner of the Salt Lake Valley, surrounded by mountain peaks. Its place in Corner Canyon makes it one of the highest buildings points in the valley. You can’t go much farther without being over the mountain ridge into Utah Valley beyond.

It seems fitting that you should have to “lift your eyes” to a temple, just as it lifts your spirit and transforms you away from the hum drum realities of the workaday world.

The temple is open to the public for tours from 15 Jan to 14 of March and a million people are expected across its threshold during those two months before it is dedicated in 12 sessions 20-22 March, 2009. Meanwhile, we invite you to tour the temple from your armchair as you view the following photographs from the temple’s interior.

According to Steve Goodwin with FFKR, an architect for the temple who also worked on the Nauvoo Temple , the temple at 58,000 square feet is considered a medium-size temple on 12 acres. Originally, it was planned to be larger, but site constraints made the change necessary. To contrast the Salt Lake Temple is 200,000 square feet.

Steve said that this temple is on the convergence of two fault lines and the plans specified that it would be engineered and designed as all temples are to last well beyond a hundred years, and probably several hundred. The groundbreaking was 5 Aug, 2006.

When it is dedicated as a House of the Lord, it will serve 25 stakes with 60,000 people and require 1000 ordinance workers for its use. Initially, attending the temple will require reservations, and then as the crowd flow is assessed, over time reservations will only be required in peak times of the week.

The temple has neither clothing rental nor a cafeteria which serves meals. Patrons will be required to bring their own clothing unless they are doing baptisms for the dead.

Inside the temple, many reporters had expected it to be cathedral-like with a large open space many floors high, and were surprised instead to see that temples are divided into smaller rooms for many purposes.

The Draper Temple can accommodate 100 patrons at once in two sessions, with ordinance rooms that seat 50 apiece.

Made of white granite from China, the temple rises to 50 feet, but the spire that carries the golden statue of Moroni soars to 168 feet, mimicking the mountain peaks it sits in.

The Draper Temple will glow above the valley floor, tucked into the southeast corner, in a place appropriately called Corner Canyon.

The temples of the Church are designed to reflect the landscape or culture where they are located. The windows of the San Antonio, Texas, temple, for example, feature the beautiful wildflowers of Texas. Windows in the Accra Ghana Temple are designed to look like kente cloth. The recurring motif in the Draper Utah Temple is the sego lily, which is Utah ‘s state flower, which helped sustain the pioneers during their first hungry years in the valley as they made sego lily tea and ate sego lily bulbs. The sego lily motif is also carved into the carpet in the Celestial room and the paneling and ceilings of other parts of the temple.

The temple has five sealing rooms, each with mirrors on both sides of the room facing each other, where newly-sealed couples can stand and see themselves continuing on for eternity in the glass.

Every temple has a baptismal font where work is performed for the dead. It is a loving God that provides a way for all of his children from all ages of time to be taught his gospel and be offered a way to return to Him. Baptism for the dead was certainly known among the early day Saints. As Paul said in 1 Cor. 15:29 Else what shall they do which are baptized for the dead, if the dead rise ot at all? Why are they then baptized for the dead? The baptismal font rests on the back of 12 oxen, representing not only the 12 Tribes of Israel, but also the fat bull, who is Christ, who breaks the bonds which shackle us.

This art glass with its soft blues and sages, allows light to flood the temple. It was designed by Tom Holdman, who has also created the stain glass on many other of the LDS temples in recent years.

This elegant room is where a bride comes to finish getting ready just before she gets married.

Throughout the temple, the floors are made of limestone from France and the wood, pictured here with its elegant patterning is Makore from Central Africa. Some have asked why the LDS temples are so beautifully crafted, and the answer is simple. We are showing our reverence for the Lord and it is paid from the tithing of the faithful who know the work is true.

The Draper Temple has two ordinance rooms whose walls are original murals depicting the beauty of the creation as God designed it. The mural in this room, painted by Linda Curley Christensen, who also painted several original oils for the temple, looks like a scene from the Wasatch Mountains. Elder William R. Walker, executive director of the temple department, said if you visit a temple in Brazil, the murals will have the landscape of Brazil. Each temple is meant to resonate with the people it serves. Colorado artist Keith Bond painted a landscape of yellow aspens for the walls of the other ordinance room.

As a patron leaves the first ordinance room in the temple where the murals are painted, he or she moves into an ordinance room like this where the light is brighter, as a symbol of moving closer to the presence of God.

The craftsmanship in the Celestial Room is beautiful. Elder Ballard invited the reporters he took through the temple to be quiet in the room and know that this is a taste of what heaven is like.

The crystals in this chandelier is from Austria, but natural light fills the room through frosted, art-glass windows. Elder Ballard said the temple is designed to maximize the light, a symbol of the light that can fill the souls of those who come.

Even the waiting areas of the temple are calm and peaceful, meant to draw those who attend away from the world into a closer communion with God.