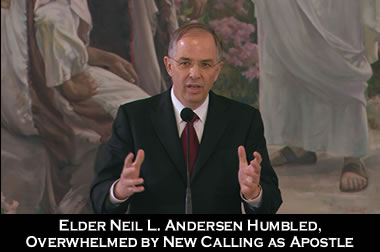 As he assumes the mantle as the newest member of the Quorum of the Twelve, filling the vacancy left by the death of Elder Joseph B. Wirthlin, Elder Neil Linden Andersen, 57, said, “My knees are weak and my emotions close to the surface.”

He said, “I am very humbled by this day, very overwhelmed by what is ahead of me, the great honor and responsibility that has come to me.In so many dimensions I feel inadequate and humbled.” However, he added, ” I take solace in one qualification where there can be no latitude extended.”

That qualification he told both the members at conference and the press at the press conference is this: “I know that Jesus is the Christ with a sure and certain witness. I know he lives. I know he is resurrected. We must live in such a way that he and his Father communicate with us, that we know their will.I am hopeful that by way of ordination that certain gifts come to me that I anxiously await.

He said, “I am not what I must become, but I hope for the promise that President Monson gave in priesthood meeting-that the Lord will shape the back to fit the burden.”

He said that in one way, being called to be an apostle is no different than any other calling in the Church, that is, that we neither seek callings nor do we refuse them. In this case, it is far more daunting. You feel a heaviness, a weightiness, a humility as you contemplate what you are expected to be.”

He also quipped that for much of his life, he’s been trying to become “what my wife already thought I was.”

Elder Anderson said that he and his wife Kathy, learned of this call late Wednesday afternoon. He said, “In that time, for some reason, we haven’t been able to go to sleep until at least midnight and haven’t been able to sleep until after 4:00 a.m.” He said that in those quiet moments of the night, you have a lot of time to talk. “We don’t have any answers. We just want to move ahead and try to be responsive to President Monson and the Twelve.”

The announcement of Elder Andersen’s new calling was made Saturday morning by President Thomas S. Monson in the first session of the 179 th Annual General Conference, coming to a man who was serving as the senior member of the Presidency of the Seventy.

That long walk in conference from sitting among the Seventy on the stand to moving to take his place in the empty chair with the Quorum of the Twelve was certainly made easier by the number of years of seasoned experience Elder Andersen has already had in key leadership positions in the Church.

Prior to his call as a General Authority, Elder Andersen served as a mission president in the France Bordeaux Mission, and as president of the Tampa Florida Stake.

He said that for ten of the last twenty years he and his family have lived out of the United States . In those experiences, “We’ve come to love people all around the world. We love the people everywhere. We are grateful for our family and those who have influenced us so much.

“No one who has the perspective that I have been able to have could not help but see the hand of the Lord at work.” He said that last year in Brazil over 40,000 people came into the Church and new stakes were created nearly every month.

“We just got back from Colombia ,” he said. “I think the whole weekend we saw one North American. We have only a few North American missionaries in Colombia . It was amazing to see the power of the church totally without North Americans.”

In France, he said, the Church does not grow as quickly but the dedication of the church members is “amazing” as they live in a secular society, but put the Church above all else.”

He said that there are many modern-day pioneers who are helping to grow the Church in countries, who share the some spirit and devotion as early members. “They don’t push handcarts,” he said, “but they are exactly the same.”

Elder Andersen was born in Logan Utah and raised in Pocatello, Idaho on a dairy farm where he remembers moving a lot of irrigation pipe and hoping to get an excellent education. That was fulfilled when he graduated from Brigham Young University and earned a Masters of Business Administration from Harvard University . After completing his education, he and his family moved to Tampa , Florida where his business interests included advertising, real estate development and health care.