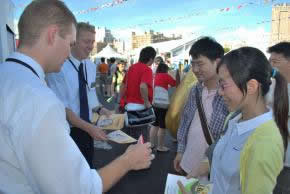 Dozens of Mormon missionaries provided language and hosting assistance at the recently concluded 2009 World Games in Kaohsiung, Taiwan. The World Games are held every four years and feature 35 non-Olympic sports. This year’s Games brought over 4,600 athletes and coaches from 103 countries to Taiwan’s second-largest city.

Months before the Games began in mid-July, missionaries from The Church of Jesus Christ of Latter-day Saints from the Taiwan Kaohsiung Mission held weekly English classes at the request of the city government.

The classes were taught to government officials as well as officers of the Kaoshiung City Police Department. Students in the classes learned help words and phrases in English so they could accommodate the tens of thousands of international visitors who attended the Games.

“Because your missionaries speak such good Chinese and English, their training has been very effective for our police department,” said Gao Yi-time, foreign affairs representative with the department.

Also, during the two-week run of the Games, Mormon missionaries from the United States serving in Taiwan were invited by the American Institute in Taiwan (AIT) to act as greeters to welcome the public to the popular American exhibition venue.

The exhibition was one of many sponsored by countries and international businesses during the Games. It offered local Taiwanese and visitors from abroad a chance to learn of American culture and products.

At the request of AIT, missionaries were also invited to assist with hosting and translation at a gala reception that was attended by hundreds of athletes, coaches and officials.