A Most Remarkable Mission Conference 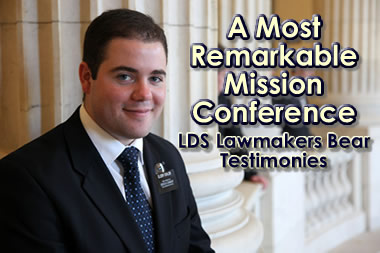 If you had happened into the Cannon House Office Building on Washington DC’s Capitol Hill a few days before Christmas, you would have heard something amazing and most unusual. 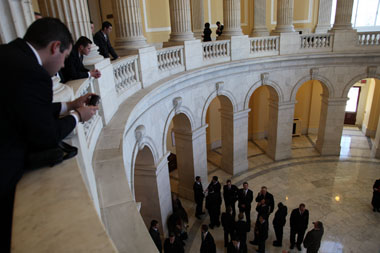 There, echoing down the halls and reverberating up the marbled stairs of the rotunda, wafting into the offices where laws are formulated and the heavy lifting of government is done, were the booming voices of missionaries, singing at the top of their lungs, “We are all enlisted ’til the conflict is o’er. Happy are we.  Happy are we.” 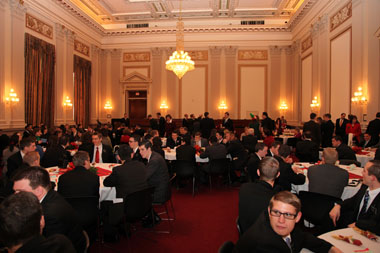 The missionaries didn’t mean to be singing for all to hear, but the doors were flung open to the elegant Cannon Caucus Room, and they were gathered for what most surely would be the most unusual Christmas gathering of missionaries held this year.  Most mission Christmas gatherings are held in chapels and cultural halls, and an inspirational speaker may be chosen to address the elders and sisters.  They are warm and uplifting gatherings and the missionaries anticipate them for many weeks. 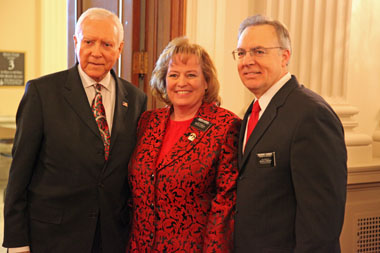 But taking advantage of their location in the Washington DC South mission, President and Sister Mark and Karyn Albright held their Christmas gathering this year in this House office building and, instead of having an inspirational speaker or two, the LDS members of Congress came to address the missionaries and bear their testimonies. 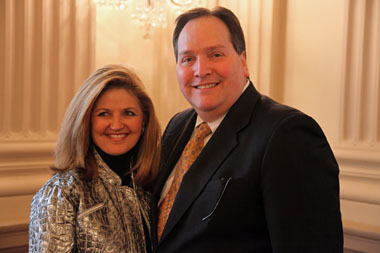 Bill and Tammy Nixon, who sponsored the event, said that no matter how pressed the senators and congressmen were in their schedules, they all were pleased and eager to come to address the missionaries at Christmas time. “They wanted to come,” said President Nixon, who presides over the Mount Vernon Stake. 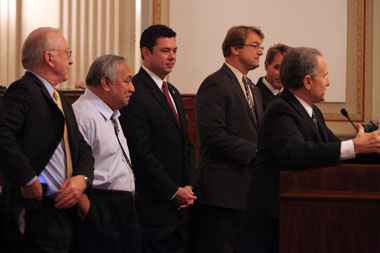 The missionaries were given models of powerful people in the very highest seat of government, who nonetheless, put their testimonies and their commitment to God first.
Each one obviously relished the chance to change modes for a few minutes and talk about the laws of the gospel rather than the laws of the nation. 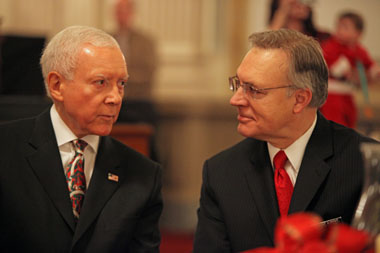 Senator Hatch converses with President Albright for a few moments.

Senator Hatch quoted this famous line to the missionaries, “I’d rather be a servant in the House of the Lord, than serve in the seat of the mighty.”  He also added a quip, “Without a brain, you may look good, but then all you could do is run for public office.”

Here’s a brief summary of the remarks of each LDS lawmaker as they greeted the missionaries:

When Senator Hatch was on his mission in 1954-56, he was warned that there was a minister in one of the cities of Indiana who hated the Church and liked nothing better than to get a missionary and turn him inside out.  The minister had become famous throughout the mission, so when then-Elder Hatch was visiting the area just for the day and happened to pass the minister’s door, he thought he’d stop.  Senator Hatch had been an intercollegiate debater and he said, the temptation to take him on was “too much to pass up.” 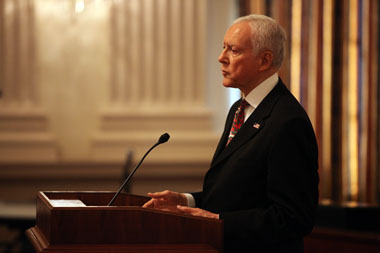 Senator Hatch said you could almost see the minister rubbing his hands together in glee, and he asked if the missionaries had brought their triples.  The minister had read and re-read these scriptures and he had notations on many margins.  He told the missionaries that if they could answer six objections to the Church that he would raise, he would resign his ministry and join.  Then, said Senator Hatch, the minister started “working us over” and he realized how foolish he had been to choose to visit this man for a debate. 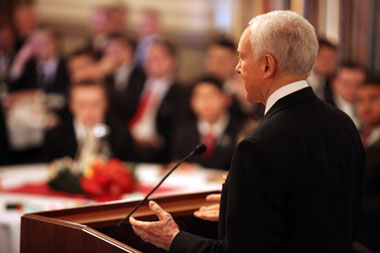 Senator Hatch looked up at the ceiling and said a silent prayer, and immediately he began to get answers.  “I heard a little voice that said, ‘Go up on the rostrum with him.’  That way he wouldn’t be looking down at him with such intimidation.

Then the minister said, “You believe Joseph Smith is a prophet of God.  You believe that he received the Book of Mormon from God. If I can show you something that isn’t true, will you resign your commission and leave the Church.”  Like an idiot, Senator Hatch replied, “I said yes.”

Then the minister turned to Alma 7:10 in the Book of Mormon that said the Savior would be born at Jerusalem.  He said, “Everybody knows that the Savior was born in Bethlehem.  What do you think of that?” 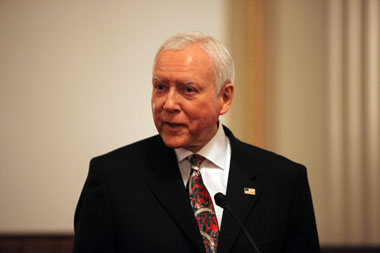 As the discussion followed, Elder Hatch continued to pray and was told specifically by this quiet voice to turn to 3 Nephi 20:29,  “And I will remember the covenant which I have made with my people; and I have covenanted with them that I would gather them together in mine own due time, that I would give unto them again the land of their fathers for their inheritance, which is the land of Jerusalem, which is the promised land unto them forever, saith the Father.”

There was the answer.  The entire promised land, the land of their fathers, was at that time called the land of Jerusalem.  Hugh Nibley’s research verified that.

Senator Hatch said that it shook the minister right to the core.  “Because I had worked so hard as a missionary, I could rely on the Lord to help me through. I learned on my mission that what appear to some of the biggest objections that people raise against the Book of Mormon turn out to be the greatest proofs.”

“I know it’s true.  You are some of the most fortunate people on earth.”

Congressman Bishop said he saw a sign that read: “A missionary is someone who leaves his family temporarily so that other families can be together forever.” 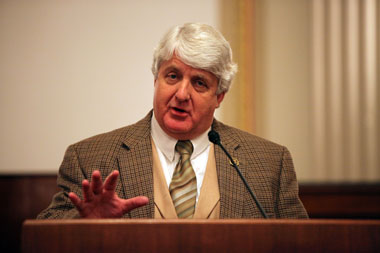 When Christ was meeting with his apostles, he told them to be of good cheer, because he had overcome the world.

If he had not done that, everything else would be useless.  His sacrifice makes all else possible.  How we tell that story could not be more important.

Senator Bennett said that several years ago he had been called to be on a Church committee that was examining how to make missionary work more effective.  After extensive research the committee came to an important conclusion about what makes people stay in a teaching pool. 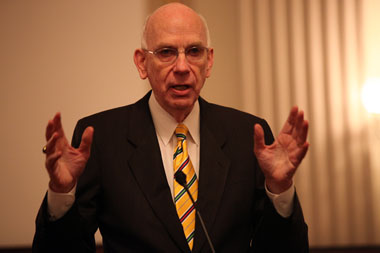 Many people may start and hear the first discussion, but what makes them stay on is based on three words.  They are the most important three words any missionary can remember in trying to teach the gospel, so important, said Senator Bennett, “that they should be tattooed on the inside of your heads.”

They are: “meaning,” “confirming” and “belonging.” 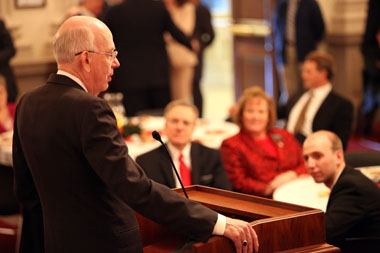 Meaning.  People are attracted and stay in a teaching pool because they heard something that had meaning in their lives.  That meaning might be different for different people and that is why it is so important that missionaries listen to the Spirit to know what to say to each person individually.

Confirming.  People want to continue on with the gospel when they have a confirming experience that what they are hearing is true.  Missionaries must learn to bear a testimony so the Spirit can confirm the truth.

Belonging.  People need to have a sense of belonging; that they have been reached out to in friendship.

“My mission,” said Senator Bennett, was the formative experience of my life.  I still draw upon the experience.  If you will learn to love the people, you will be sustained in ways you can not now comprehend.

Though Congressman Flake is in a high pressure job, he has still had the opportunity in the last few weeks to sit in on a few missionary discussions, and though he spends the week in Washington DC, he flies home to Arizona every weekend to be with his family and go to church.  This means he has to work hard to get his home teaching done. 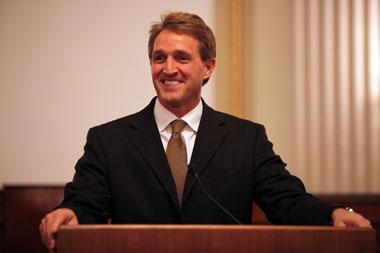 He told the story of catching a ride home on Air Force One with President George W. Bush and he found out that he could pick up the phone on the plane and call anywhere.  He asked if he could call Sid Stephenson, someone he home taught, who was over 80 years old, just to check on him.  Just then President Bush walked by, so he was able to explain the home teaching program to him.  When the phone rang at Sid’s house, it announced, “Air Force One calling,” and President Bush said hello.

Senator Reid talked of his conversion to the Church.  One night his young wife came home from her job, where several Latter-day Saints worked, including a stake missionary who wanted to come and talk to them about religion. At that point they had zero religion and no apparent interest or background, but Senator Reid remembered that growing up in Nevada, the nicest kids in school were the Mormons. 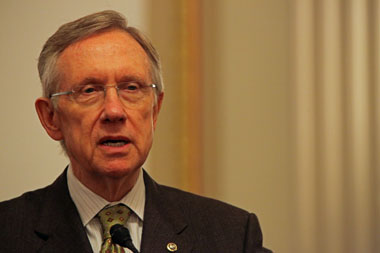 This missionary saw them every week for several months-and our joining the Church has made a tremendous difference in our lives.  He said to the missionaries, “You may be teaching someone like me who has no religion and no background in it, but you can change their lives.  I testify that the work you are doing is the Lord’s work.” 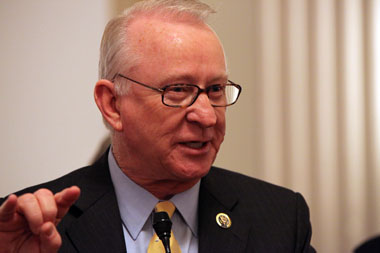 Congressman McKeon said, “I want you to know why this is so wonderful.  It’s the message of the Savior that we’re about.”

Congressman Herger said it was wonderful to see the bright smiles and spirits of the missionaries and said he was a convert who had first learned about the Church when he studied for an accounting class with a returned missionary. 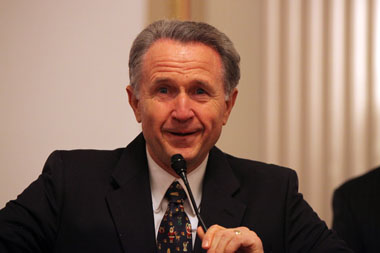 He said, “My heart is exploding with joy to live at this time when the gospel is present and to be born on the earth where the Savior came.  God bless you, missionaries.  There is no more important work in the world than what you are doing.”

Congressman Chaffetz was a place kicker on the BYU football team, but not yet a member of the Church when he was in college.  He watched the prayers in the locker room and the member’s actions and began to study on his own.  Finally, he went to tell, Floyd Johnson of the team, that he was ready to be baptized. 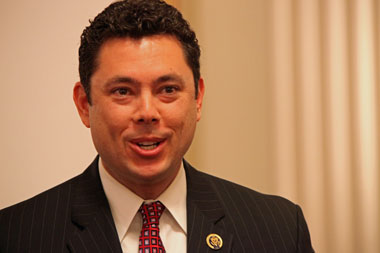 “You can’t be baptized,” he said.  “You have to have the missionary discussions first.”

So, the missionaries who were being trained at the MTC in Provo were appointed to use him as someone to practice on.  “They were so nervous,” he said, “and inexperienced.”  But they came 12 at a time to give him the discussions. “I can truly say that it took 50 or 60 missionaries to get me baptized,” he laughed. 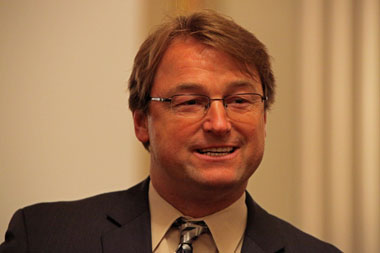 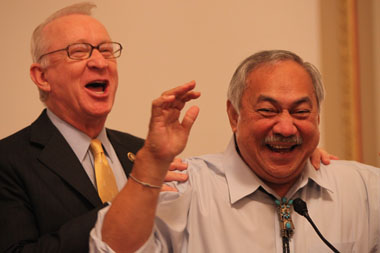 He quoted Matthew Cowley, who noted, “The greatest calling in the Church is to be a worthy member.”  He said that you could be a member of Congress, or a General Authority, or a bishop or anything, but the most important thing is to be worthy to go to the temple.”

Click here to go to part 2 where you will see a number of pictures of the missionaries and attendees at the conference to give you more of a flavor for this unique event.