Arriving in Haiti with Willing Hearts and Souls | Meridian Magazine

Arriving in Haiti with Willing Hearts and Souls

Haiti is in need of so much help. The Utah Hospital Task Force would like to bring down many more planes to give medical care and construction help to Haitians and save orphans. Donate at www.utahhospitaltaskforce.org

“I need 40 pizzas delivered to an airplane at the executive terminal here in Miami.  How fast can you get them here?” asked an insistent Steve Studdert.  Some listening close by thought this was a treat for all these amazing Latter-day Saint volunteers on their way to Haiti.  “No, this is not a prank call.  Son, let me talk to your manager.”  It took a number of pizza places to finally get the message through that we were carrying as many pizzas as we could to the men and women of the 82nd Airborne Division of the United States Air Force stationed in Haiti.  Steve had heard from one of his contacts that the personnel there were pining for pizza.  “Okay, then if 25 pizzas is all you can make, we need them here, delivered to this plane in 30 minutes.  We’ll have security waiting and the TSA has cleared the delivery.”  Steve then said to the people in the front of the plane, “I need a credit card, quickly, somebody.”  Credit cards came from every direction to help.  It was amazing. 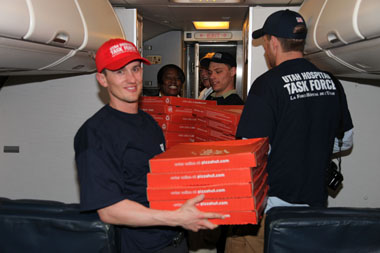 The word spread through the plane that the pizzas weren’t for us.  They were a goodwill offering to be given to the 82nd Airborne because we were going to be working with them a great deal and we wanted to get off on the right foot. 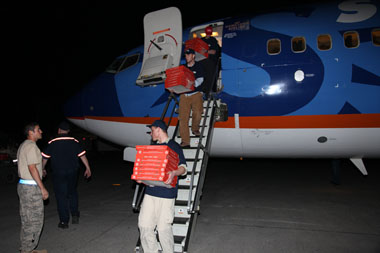 Calls were made ahead to the 82nd Airborne, stationed in one of the most devastating human dramas of history.  They are they to support and bring relief to the people of Haiti.  They are there to help where they can in any way possible.  And they were hungry. 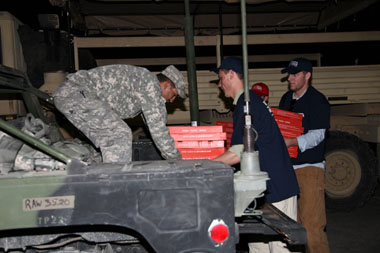 The pizzas were the first thing off the plane and loaded right into the back one of the Humvees.  These men and women could not have been more helpful.  Yes, the pizzas were a great help, but I have come to find out-these are one of nation’s great treasures.  These are remarkable human beings. 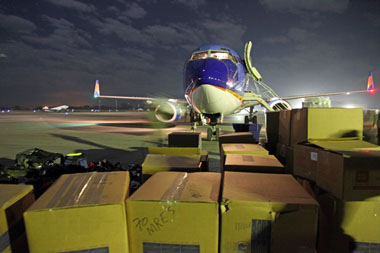 There was a thrill in each person’s heart as we arrived.  The passengers broke into spontaneous applause upon touchdown and we knew we had a mission to perform.
It was VERY late at night and we had 125 Latter-day Saints, all their gear, and all the supplies to unload off that plane as fast as possible.  The logistics of getting this many people to even camp in one place was nearly impossible.  Practically every open area, away from buildings, is taken up with displaced Haitians. 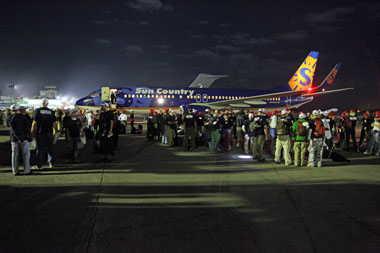 It was hot and muggy as we all got off the plane and gathered into companies of ten with team leaders over each group.  Numbers had been written on our hands with permanent markers so we could quickly fall into our groups and not have fatigue overcome our organized gathering. 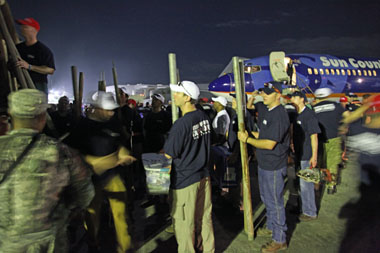 Bucket brigades were formed as we loaded tons of gear (literally) onto the awaiting large trucks the 82nd Airborne had brought to meet us.  One of the airmen asked me a little about the group.  I said we had a lot of doctors and nurses and construction people and 70 Creole speakers in the group.  He was astounded-he said, “This group is unlike any that has come here.  No one has that kind of translation assistance in this entire country.” 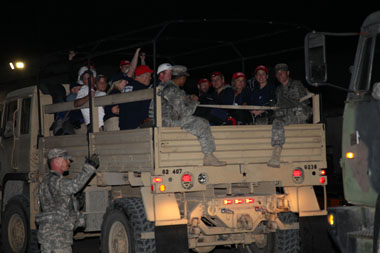 The first three groups were loaded on the trucks.  Because of the gear, there was not room for all 13 groups the first found.  Though our camp was only 4 or 5 miles from the airport, the roads and logistics to get us there was difficult at best.  The round trip would be nearly two hours. 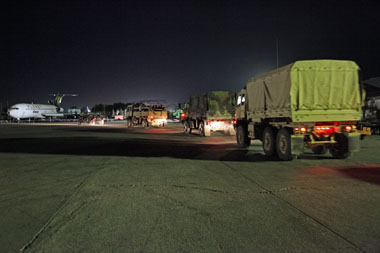 The convoy rolled away from those of us who were left behind.  Adrenalin had taken over by this time and most were very much awake.  Word came that many of the cell phone providers were offering free incoming and outgoing calls from Haiti from January 28 to February 28.  This sent a thrill of relief through the group as we were all concerned about the $1.69 or higher charge per minute for all of our calls. 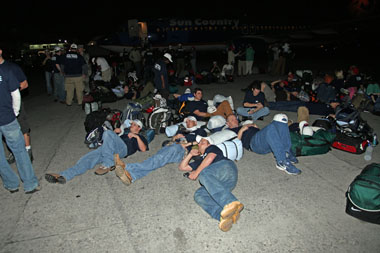 The tarmac was quite comfortable for many and some sacked out for the two hour wait for the convoy to return.  It was now 3:20 AM.  There was not one word of complaint from one person that I heard.  We were all here to serve. 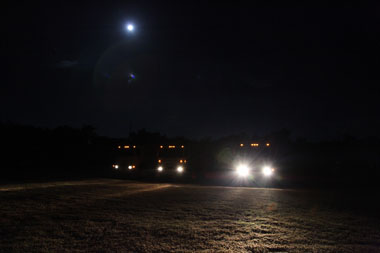 We arrived in the darkness and the 82nd Airborne parked their trucks so that we could see somewhat in getting our gear to our tents.  Little did we know that we were camped in the “Ritz-Carlton” campground of Haiti.  And the first group that had come, had already set up the more than 65 tents for the group.  We finally sacked out at 4:40 AM, exhausted, but very happy to be safely bedded down. 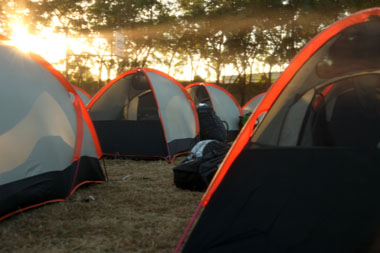 I had to wake up to catch first light on our camp and this was the view from inside our tent through the mosquito netting.  It was a beautiful morning in Haiti. 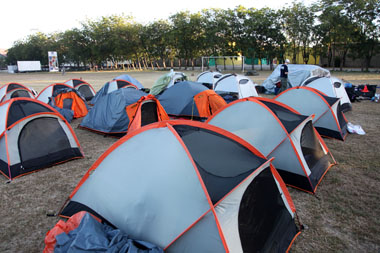 The tents were provided to us by Latter-day Saint Humanitarian services.  They will never make it back to the states as they have been committed to an orphanage and to other families the second our group pulls out.  I have had no less than six strangers ask me if they can have the tent we are using. 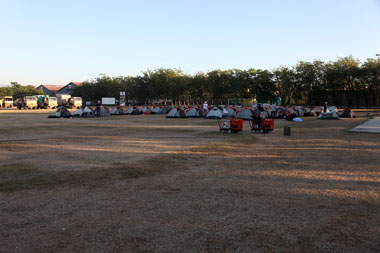 Our camp was first settled buy the Israelis just one day after the quake.  The field was covered with trash but the perimeter was secure so it was a perfect place to set up.  All the trash was moved, tents were set up, communication links were established, gates were secured.  It became a perfect place for the 82nd Airborne to take over when the Israelis left. 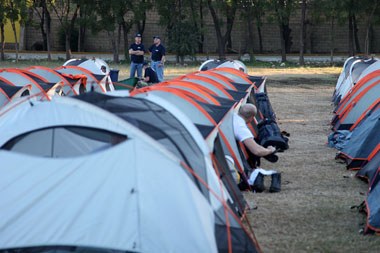 It may not look like much, but we feel very blessed to be here-it really could not be a nicer place. 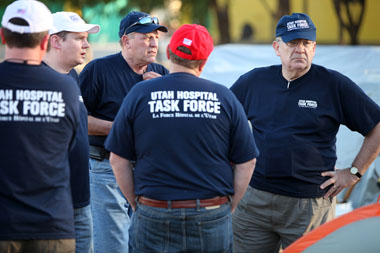 Some began to emerge after the two hours of sleep, some never slept.  It was a morning that would begin a series of miracles that none of us could imagine were about to happen. 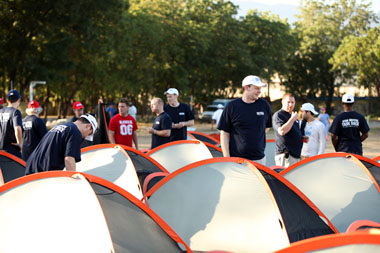 Steve Studdert (right) and Gary Worthington (other blue hat) conversed early about some of the plans.  We were about to be on the adventure of a lifetime.

Be sure and read today’s cover story, Haitian Orphan Rescue, The Story Behind the Story.  Click here to read it.

To donate to this ongoing effort, please go to www.utahhospitaltaskforce.org

Continue to follow the stories from Haiti as they come to you daily (as we can get Internet service).

All Haiti stories will be updated at www.latterdaysaintmag.com/haiti
No Comments | Post or read comments