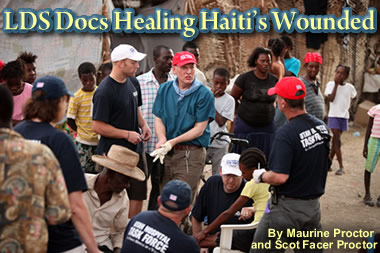 The Utah Hospital Task Force arrived back in Utah from Haiti Feb. 12.

The many LDS doctors, nurses, and EMTs,  who went to Haiti to help as part of the Utah Hospital Task Force team, did dirty, hard work amidst scenes of human suffering, that were simply staggering, in enervating heat.

One hospital tent’s temperature was measured at 116 degrees.

This act of service was not the warm, fuzzy sort, you may imagine from a distance, but a gritty commitment to mourn with those who mourn and heal the physically and emotionally devastated. 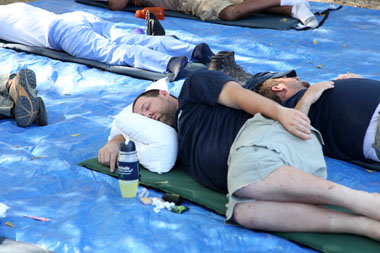 Several of the task force became sick, some with fevers.  Many had to have IVs. One shock/trauma nurse collapsed in the heat.  For this they volunteered.  For this boot camp of service they were chosen from 850 qualified volunteers.

Before the earthquake, Haiti’s medical system was already stressed.   Now, like the rest of the country, it is in shambles.  University Hospital in downtown Port-au-Prince-the hospital run by the government that saw patients nobody else would see-stands, but precariously, unusable except for the surgical unit. 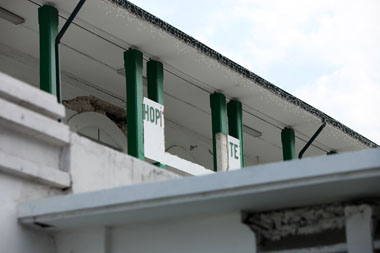 The nursing school on the grounds collapsed, killing, according to some estimates 95 students and the medical school killing 57 of the 60 medical students and teachers.  Their bodies are still inside the demolished buildings.

Not only has a badly-needed brain trust been wiped out, but facilities are gone, just as the population is reeling from injuries, wounds and a new susceptibility to the spread of infectious disease as they live outside in the most unsanitary of conditions.

At the University Hospital, the Red Cross set up a makeshift hospital with tents crowded with beds.  Though the beds are tightly lined up in the tents, there are not enough of them, and the daunting challenge is how to care for the numbers of post-operative patients and those with long-term physical trauma who require prosthetic limbs, frequent wound debridement, dressing changes and months of rehabilitation. Released from the makeshift hospital, they have no homes to go home to and no necessary follow-up care.

The staff in an intensive care unit in a Red Cross tent at University Hospital, lined with the suffering, are mostly LDS on this day.  Just like their many LDS counterparts spread throughout other tents on the hospital grounds and in other hospitals in the city, they are intently busy, sweating and exhausted. 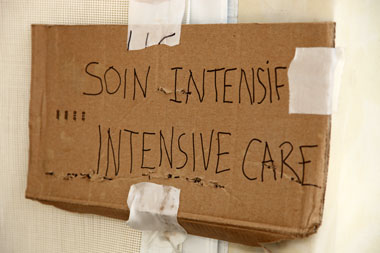 In these first weeks following the earthquake, the hospital was staffed almost entirely by international volunteers. What made the LDS more effective than many of the international medical volunteers is that each was paired with a translator–Creole-speaking, former missionaries who talk to the people in ways that warm and comfort them. 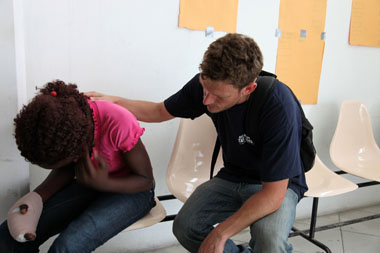 One of our translators stopped to comfort a beautiful teenage girl who just had fingers amputated.

Translators are at a premium in Haiti, where so many from different nations are trying to help.  These former missionaries, however, have a nearly magic touch.  Their advantage is that they genuinely love the people and have learned the fine art of charming and relating to them. 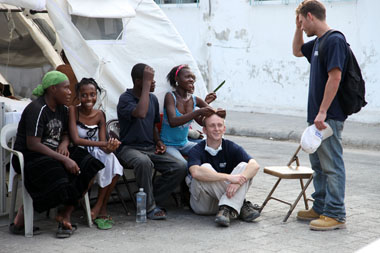 Our “white-hats” (the translators) could take tense situations and calm the people and make them smile.

Still, though the task force is working under the best conditions they could devise, patient care is frustrating and sometimes heart-rending. 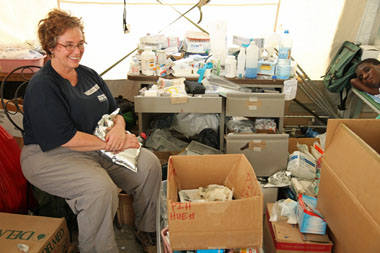 DeAnn Barnes, a nurse, was dispensing medications, and anxious because there were not enough nurses and too many patients. She said, “The doctors make rounds and write prescriptions for medications that we do not have.”  For many medications the nurses have to leave the tents and try to round them up, looking in at least four different places, and if they happen to be found, they may be donated from another nation besides the U.S., so medication names and amounts are different, and new calculations have to be done.

On top of that is an organizational nightmare since the tent has no shelves and all the donated medical supplies were dumped in a big plastic box.

As hard as they work, DeAnn said, a medication that should have been given at 8:00 a.m. is often not found and delivered until 4:00 p.m., if at all.

DeAnn said, “This is supposed to be an intensive care unit, where patients are precisely monitored, and all we have is one blood pressure cuff.”  They can’t draw blood for tests because they do not have enough test tubes.  Daily clean sheets are a dream, not a reality.

In the United States, most IC nurses and doctors have one or maybe two patients at a time.  The volunteers here have multiple beds of the sick, and, to add to the confusion, the tent is crowded with their families who bring food and try to sleep under the patients’ beds at night. 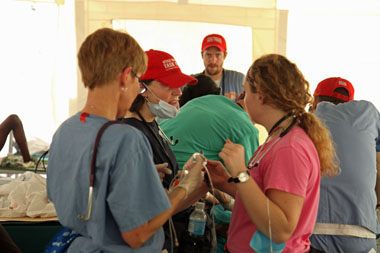 Natalie Robison, also a nurse, is focused on helping a child with an IV, who is a brittle diabetic, but she said, all the IVs keep failing because the people are dehydrated, unable to get adequate supplies of clean water.  She has spent her day battling the failing IVs. 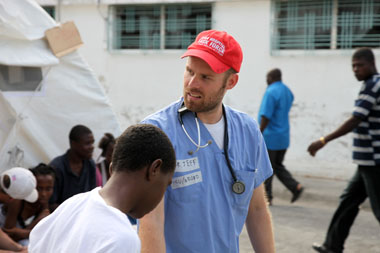 Dr. Jeff Bigelow had the extreme blessing of being a doctor and being able to speak Creole (have served his mission here).

Dr. Philip Huber and Dr. Jeff Bigelow are seeing patients with every kind of ailment imaginable.  On this bed is a man with pneumonia whose blood tests have just come back revealing that he is HIV positive. 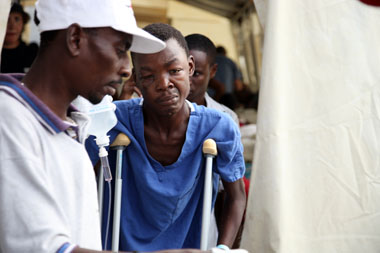 Lockjaw is becoming more and more common (as with this patient).

At the end of the tent is a man who has lockjaw from tetanus.  One of the doctors in our group said he has seen three die from lockjaw in as many days.  Various doctors in this unit have attempted to insert a feeding tube through his mouth several times, but the man gags and is unable to do it.  Now, our LDS docs will have to work on inserting a feeding tube through his stomach, or this man will die, too. 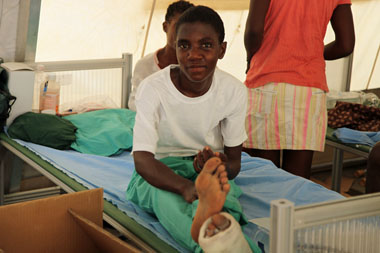 So many could not resist Eric who lost everything but his life.

A handsome young twelve-year-old, named Eric, sat on a bed with his jaw wired shut.  In the earthquake, he broke his jaw, his leg and lost both parents, every sibling and his home.  He subsists on a liquid diet like Ensure.  The only problem is the hospital is low on Ensure.  If he is released, he has no place to go.  On his tag, however, there is a notation from a nurse, not in our group, that she wants to adopt him.