The Morning of a Beautiful, Clear Day: A Photographic Essay of the Joseph Smith Farm | Meridian Magazine

The Morning of a Beautiful, Clear Day: A Photographic Essay of the Joseph Smith Farm 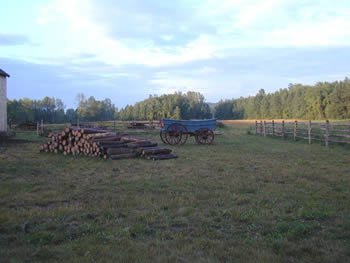 Looking south from the barn yard on the Joseph Smith Farm soon after sunrise.

In the last four years the farm has undergone extensive changes and since many of us may never get to visit there and many others may only visit once in a lifetime, I thought it would be well to share with you some beautiful photographs directly out of my digital camera to your screens at home. You will be able to click on each image to enlarge it (let me assure you it’s worth it to study each one). I’m hoping that the Spirit I felt there will be conveyed to you as if you were there with me.

You’ll notice some obvious changes on the farm: of course the cabin has been reconstructed upon the original footprint of the foundation. The frame house that has been there since the Prophet Joseph’s brother Alvin started building it in 1822 has recently been through a major overhaul. Experts were called in to see how to restore it to as close to the original look as the Smiths would have had in the years they lived there. I have documented the house inside and out so you can see as they would have seen. The 200 year-old-barn that once stood on the John Young (Brigham’s father) farm in Mendon, New York not far from Palmyra was carefully taken down and rebuilt on the farm here in Manchester. A cooper’s shop was added just west of the frame house where it once stood. New trails have been made all through the Sacred Grove. And of course, the crowning jewel of the farm is the Temple.

I hope you don’t mind if I am a little personal with the captions of the pictures. I have even included some of my family members in a couple of shots. Please come with me as I take you on this intimate tour of the Joseph and Lucy Mack Smith Farm in Manchester, New York.