Why "Remembering" is Sacred to Me | Meridian Magazine

Why “Remembering” is Sacred to Me 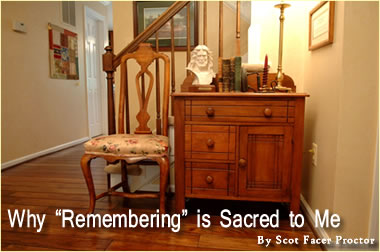 History is critically important to me-especially the history of The Church of Jesus Christ of Latter-day Saints. I thrive on it. I study it constantly. I surround myself with it. Having been raised in Missouri I grew up on it. It always has been important to my heart. “Remembering” is a critical part of the gospel. Maurine feels the same way and we try to keep it alive in our home. Let me explain.

Many years ago when we were shooting the photographs for our first big photographic book ( Witness of the Light) , we went on a 28-day road trip in our Chevy Suburban capturing the pictures we needed and staying at or near the places we needed to shoot, sleeping in the Suburban almost every night. This took us into the back roads (even in four-wheel drive at times) and byways where few people ever get to see. We gathered more than just photographs and experiences on that journey; we were also looking for treasures-antiques that dated to the period of Joseph Smith.

But the greatest treasure we found on that trip was a piece of furniture in a Nauvoo antique shop-a small walnut cabinet or vanity that had been in Carthage, Illinois in the 1830’s and 1840’s-a very simple piece, but very significant to us since it was likely in the town of Carthage in 1844 when Joseph and Hyrum were killed. This vanity was quickly dubbed “The Carthage Piece” and was placed in the entry of our home. 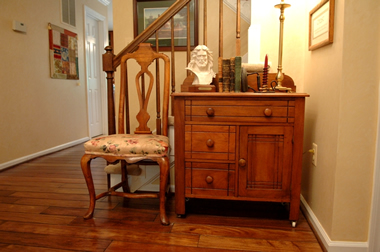 The Cathage Piece is a constant reminder of what happened in Carthage on that fateful Thursday, June 27, 1844. I wonder who once owned this piece and what stories they had in their own lives. Did the children who scribbled on the inside of the one door of the Carthage Piece see the mob go by their home that dark June afternoon? Did they know who was in that jail? What treasures of this family used to be inside this vanity? I think about those things when I see the Carthage Piece day after day, year after year. It causes me to remember, and remembering reminds me constantly to be grateful. 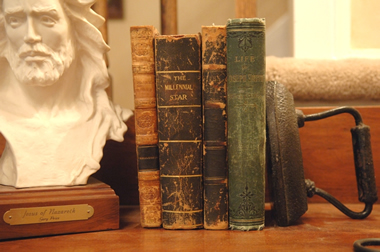 We have placed some semi-permanent fixtures on that Carthage Piece, fixtures that remind us of our faith, our sacred trust, our heritage-a small bust of Christ that was given to us by sculptor Gary Price, a sparking lamp from Nauvoo (we had a number of our relatives who lived in Nauvoo), a brass lamp and a few very old books that are supported by a 19 th century iron. One of those books is an 1819 edition of The Theological Works of Thomas Paine which we picked up from an antiquarian bookseller in Belfast , Ireland . Another is a bound edition of the Millennial Star from the year 1852-given to us by my Mother; another, The Seer by Orson Pratt, which were writings of his dating to 1853 and 1854, also given to us by my Mother. 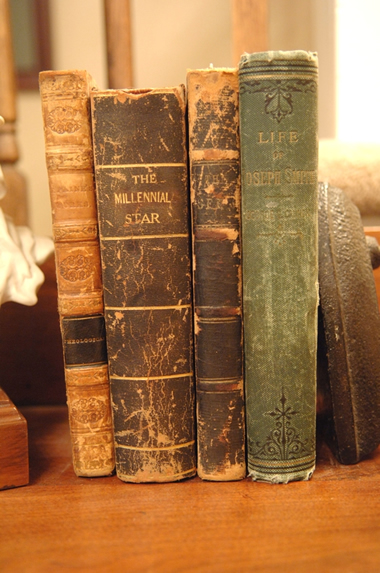 The last is a first edition copy of The Life of Joseph Smith by George Q. Cannon, written in 1888. This book belonged to my wife’s great grandfather, Jens Peter Jensen (it has his signature in it), who gave it to his son, Peter Daniel Jensen (always went by “P.D.” Jensen), who gave it to his son, Joel Peter Jensen (Maurine’s father), who left it to his wife (Maurine’s Mother) who gave it to us sixteen years ago. Now that is a treasure of history and is a double reminder of the Prophet Joseph and his brother Hyrum in Carthage . I see that book and I feel like it is a tie to the past-an eye-witness account from George Q. Cannon of the mighty Prophet of the Restoration. He sets the stage very clearly for his own memories of the Prophet Joseph.

When young George Q. Cannon had arrived at the pier in Nauvoo at age 16 his eyes beheld the Prophet Joseph for the first time: “The occasion was the arrival of a large company of Latter-day Saints at the upper landing at Nauvoo. The General Conference of the Church was in session, and large numbers crowded to the landing place to welcome the emigrants. Nearly every prominent man in the community was there. Familiar with the names of all and the persons of many of the prominent Elders, [I] sought with a boy’s curiosity and eagerness, to discover those whom [I] knew, and especially to get sight of the Prophet and his brother Hyrum, neither of whom [I] had ever met. When [my] eyes fell upon the Prophet, without a word from any one to point him out or any reason to separate him from others who stood around, [I] knew him instantly. [I] would have known him among ten thousand. There was that about him, which to [my] eyes, distinguished him from all the men [I] had ever seen.” 1

I read of that scene and it is as if I can see it through his eyes. It causes me to remember as if I could remember from my own experience. 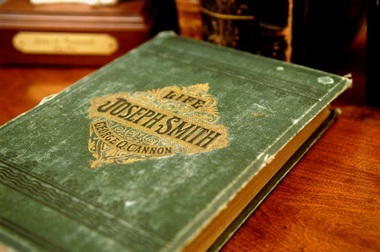 What was there about the Prophet Joseph that caused George Q. to say, “There was that about him, which to my eyes, distinguished him from all the men I had ever seen?” That is a curious statement. As I read in his introduction to this monumental book on the life of the Prophet, he gave some small part of a description of Joseph, given as an eyewitness, that helped me understand what he meant:

“When he had achieved the prime of his manhood, he seemed to combine all attractions and excellences. His physical person was the fit habitation of his exalted spirit. He was more than six feet in height, with expansive chest and clean-cut limbs-a staunch and graceful figure. His head, crowned with a mass of soft, wavy hair, was grandly poised. His face possessed a complexion of such clearness and transparency that the soul appeared to shine through. He wore no beard, and the full strength and beauty of his countenance impressed all beholders at a glance. He had eyes which seemed to read the hearts of men.

His mouth was one of mingled power and sweetness. His majesty of air was natural, not studied. Though full of personal and prophetic dignity whenever occasion demanded, he could at other times unbend and be as happy and unconventional as a boy. This was one of his most striking characteristics; and it was sometimes held up to scorn by his traducers that the chosen “man of God” should at times mingle as a man of earth with his earthly brethren.

“But whether engaging in manly sport, during hours of relaxation or proclaiming words of wisdom in pulpit or grove, he was ever the leader. His magnetism was masterful, and his heroic qualities won universal admiration. Where he moved, all classes were forced to recognize in him the man of power. Strangers journeying to see him from a distance, knew him the moment their eyes beheld the person. Men have crossed ocean and continent to meet him, and have selected him instantly from among a multitude.

“It was a part of Joseph Smith’s great mission ‘to combat the errors of ages; to meet the violence of mobs; to cope with illegal proceedings from executive authority; to cut the Gordian knot of powers; to solve mathematical problems of universities with truth-diamond truth.’ He performed a work, ‘not pagan ire, not tooth of time, nor sword, nor fire, shall bring to naught.'” 2

I love to study every line of that description. It reminds me of descriptions given of Joseph by Parley P. Pratt, Wilford Woodruff, John Taylor and many others. It reminds me how important it is to remember the things we experience in our lifetime.

But keeping in mind my love for history and my surrounding myself in history in our home, it makes me think: Have I given such descriptions of my own parents in my journal? Have I taken a page to truly describe, in minute detail, my many interactions with President Gordon B. Hinckley or with President Thomas S. Monson? Am I recording history that will clearly and accurately open my world to the view of my grandchildren and my future posterity? Do I rely too heavily on my camera to record history and not enough upon my pen? Do I record too much of schedules and travel logs and not chronicle what is in my heart? Do I carefully document what my interactions are with the Holy Spirit, depicting the joy and satisfaction, as a mortal, of receiving answers to my prayers; delineating my strugglings and wrestlings to obtain some answers? Living in these tumultuous and turbulent times, these are deep questions for me personally-for I do not want to just be a student of history, I want to detail it and describe it as it happens in my own life.

Reader response question: What things do you have in your home that are important to you, that help you be surrounded in history and/or remind you of your heritage and your past that you treasure? Please send responses to: [email protected] Please include your name, city and state (like Ogallala , Nebraska ) or city and country (like Darmstadt , Germany ).