A Mormon in Yemen – People Matter Most of All 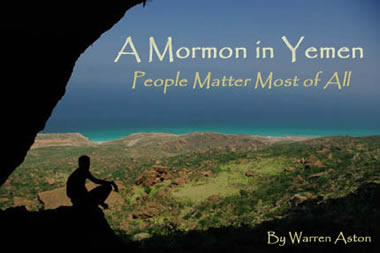 I’m told that there was a huge response to the touching story by Leroy Hannon published by Meridian a few days ago.

After being on a Lehi Trail tour last October, Leroy jetted off on his own to Yemen. His goal was to see the “Nahom” altars, but he returned with a very unexpected story.

At the end of the same tour I also went to Yemen , but overland to the eastern part of the country. From there I flew over to the remote island of Socotra in the Indian Ocean . I have been to Yemen many times over the years but never before to Socotra . 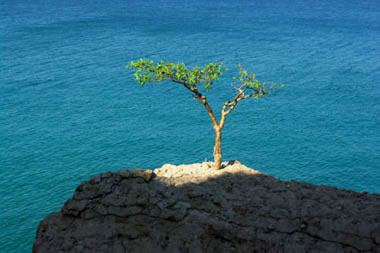 A frankincense tree beautifully highlighted against the ocean. Socotra and a small area in Ethiopia are the only places frankincense and myrrh trees grow outside of Yemen and Oman.

Socotra has been steeped in mystery and intrigue for hundreds of years. Old legends say that the secret of eternal life is hidden in a cave somewhere on the island, guarded by dragons. 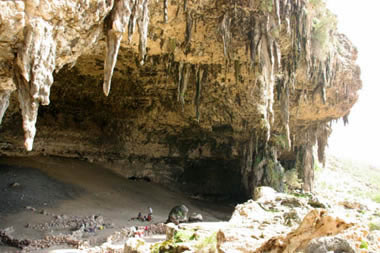 Some people still live in caves like this large one on the south coast. 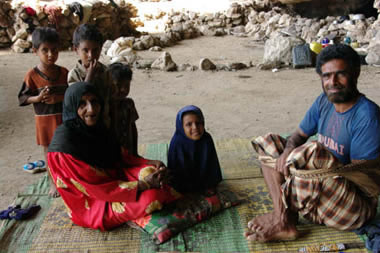 The family living in the cave included these children. The small boys were terrified of me.

The dragons are now gone but the trees still ooze their red blood. 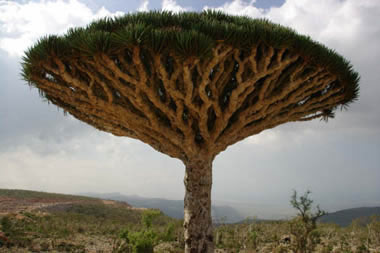 Socotra is famous for its strange upside-down “dragon blood” trees. 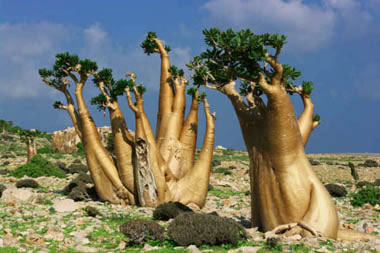 And these exotic “bottle” trees.

It is a large, sparsely populated island that is actually closer to Somalia on the Horn of Africa than to Yemen , the same anarchic Somalia that is home to warlords and pirates. 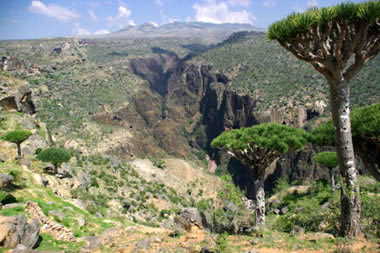 The scenery everywhere is spectacular. This is a large canyon in the middle of the island. 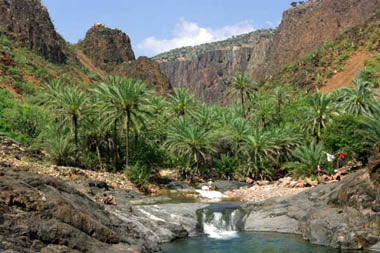 The base of the wadis can hide beautiful rivers and pools.

Socotra has been isolated from the world for most of its history. 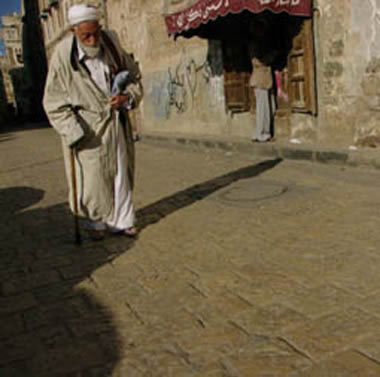 This elderly man looked straight out of the scriptures.

It is the poorest part of one of the poorest countries in the world. Its people have their own language spoken nowhere else. Most, but not all, also speak Arabic. 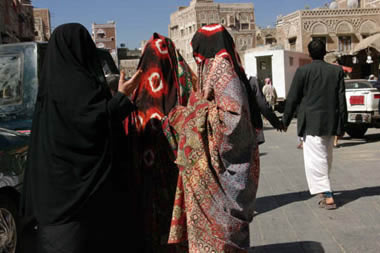 The vivid red and white coverings these women are wearing are rarely seen today.

The few outsiders who make their way there are always struck with the natural openness of the people. Their honest faces were beautiful to see. It is truly a hidden gem in an increasingly commercialized and polluted world. 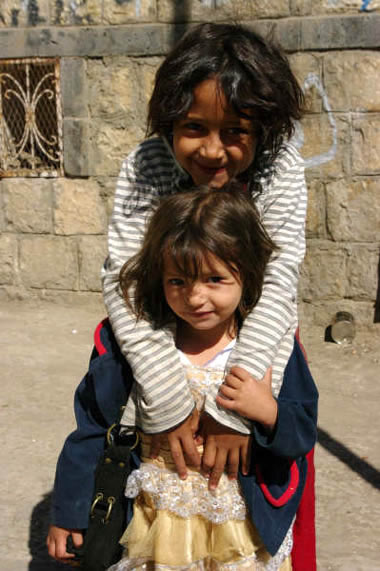 These two little girls came and shyly asked me to take their picture. 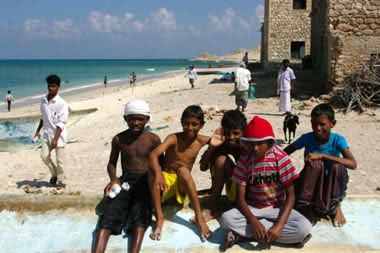 Boys in a small fishing village.

Yemen, of course, is significant to all who believe the travel account of Nephi of his family’s odyssey across Arabia. Lehi and Sariah’s family group traveled through the northern part of the modern Republic of Yemen. It was there that Ishmael, Nephi’s father-in-law, died and that he was buried at the place “that was called Nahom.” (1 Nephi 16:34). 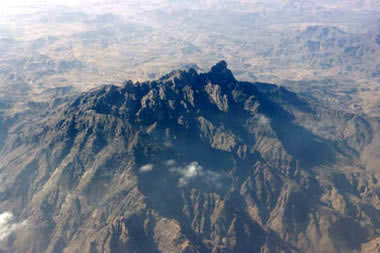 These mountains lie in the tribal district of “Nihm,” which most researchers believe in the “Nahom” where Ishmael was buried (1 Nephi 16:34). The three altars found at Nahom in 1999 that verify the name to Nephi’s day are called the “first actual archaeological evidence that supports Book of Mormon historicity” by historian Terryl Givens.

Nahom is a large tribal area that still carries the name today. In 1999, German archaeologists uncovered three stone altars with that name on them, dated to between 800 and 700 BC. This fact confirms that the name dates back to before Nephi’s day. This becomes more significant when we understand from Nephi’s account that Nahom was already the name of the place. It was not named by them. 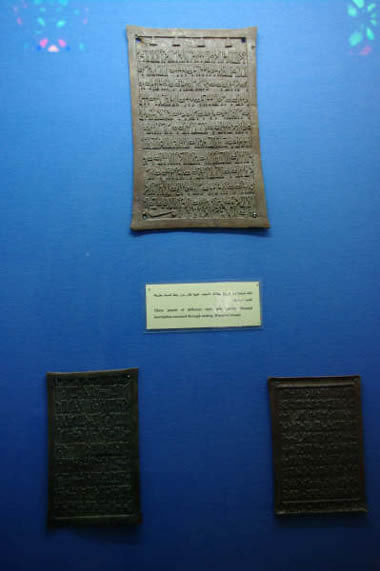 Many examples of writing on metal plates dating back to Book of Mormon times can be found in Yemen ‘s museums.

From Nahom they traveled “nearly eastward from that time forth.” (1 Nephi 17:1) until they arrived at Bountiful . It is no accident therefore that the only places on the Arabian coastline that have trees and fruit growing are, in fact, almost east of Nahom. Discovering that this directional link between Nahom and Bountiful exists in the real world is one of the most significant discoveries of recent years. No one in Joseph Smith’s day could have known this. It confirms Nephi’s account as being completely plausible. 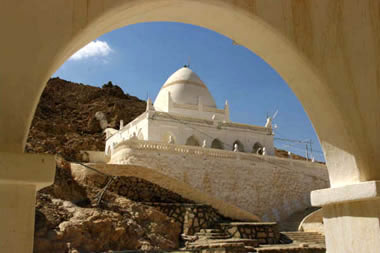 This memorial is to a pre-Islamic prophet named “Hud.” The legends of his preaching have echoes of Lehi’s dreams. An entire town surrounds the tomb and remains empty all year except for three days of festivities. People come here on a pilgrimage in numbers second only to the Haj at Mecca.

In other ways however, Yemen is of interest to many people because it is one of the most intact traditional tribal societies left in the world. The loyalty of its people is to their family and their tribe above all else. This means that ancient customs and practices — some of them dating back to before Lehi’s day — are preserved. 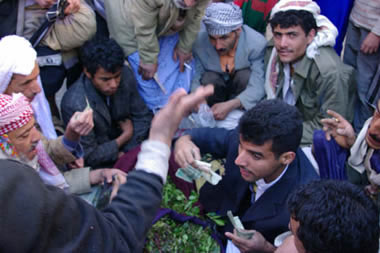 These men are buying “Qat,” a mild stimulant, to chew. 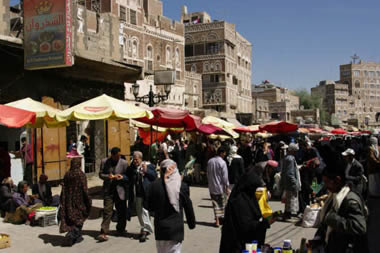 A typical street scene showing the traditional style of buildings in Sana’a, the capital of Yemen

And although a small number of fundamentalists and terrorists exploit the country and seek to use it as a base, the overwhelming majority of Yemenis are friendly, generous, tolerant and pro-Western. They all want what most of us do — peace, stability and a better life. 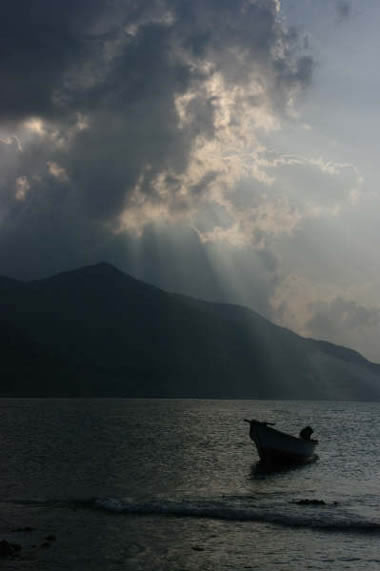 A fishing boat anchored for the night.

So while I came back with some stunning scenes in my camera I will remember the people most of all. It reminded me that in the end it is always people who matter above all else. We are all one human family, children of the same Heavenly Parents. 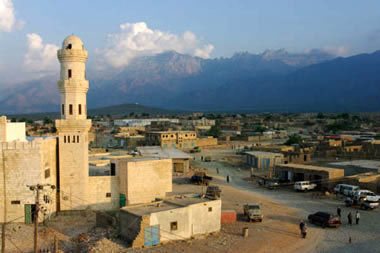 Back on the Yemen mainland the unique mud-skyscraper city of Shibam lies in the Hadhramaut valley.
No Comments | Post or read comments