Showing Up
By Marvin Payne

Really sick. 4:51 in the morning. Flu. It’s been going around (oooh, let’s not think about “things going around,” okay?). Still, the show must go on. I think it may have been Woody Allen who said something like “Ninety percent of success in life is just showing up.” Or it may have been John Beck audibling from the line something like “Watch out for that particularly large Ute.” At any rate, I think this is the philosophy (the former, about showing up, rather than the latter, about large Utes) that informed the similarly ailing

Coach Bronco Mendenhall’s recent decision to attend the BYU-Colorado State game, knowing that there was every possibility in the world that he would toss his cookies on television, which he subsequently did.

Of course, if all you do is show up, you’ll be, unlike Coach Mendenhall was that day, only ninety percent successful. Which is okay, I guess, if you’re throwing a barbecue (oooh, let’s not talk about “throwing” barbecue, okay?), but it’s not at all an acceptable percentage if attempting to affect, shall we say, a landing on the Moon. Which, as I recall, used to be a lot more popular than it seems to be now, perhaps owing to a decrease in numbers of people willing to show up.

So here I am, showing up – rhymes with (oooh, let’s not consider rhymes for “showing up,” okay?).

I am lying (as opposed to standing, not as opposed to telling the truth) on a foam pad in the living room, in a sort of quarantine, and a sort of nightshirt – everybody’s had this bug except Mom and the baby. And I wrote the first two paragraphs of this column in my head, trying to work up enough steam to slither over to the table by the bookshelf and get the laptop. I finally thought, “Hey, would the sick father of a handcart family have had the guts (oooh, let’s say “fortitude,” okay?) to slither over to the increasingly barren

supply wagon for a laptop? I mean, if there were important Backstage Graffitiing to be done for the edification of the saints?” Darn right, he would have.

So, can there a column blossom in such unlikely conditions? One might as well ask, “Can Shakespeare bloom in Cedar City?” So I’m going to. Well, no, I guess I just did. To which we, along with “Tony” who lives in New York, would answer, “Of course! Duh!”

But hey, can such Bardly blossoms spring from the humble soil of, say, Kanosh?

Well, we drove the couple of hours down there today (before flu, and I guess it was technically yesterday now – no, that’s oxymoronic ((which I wish we had some extra of in the medicine cabinet, because

“oxymoronic” sounds like it could really knock out a fever)), but you know what I mean. I think) to the art studio slash theatre of Brian slash Suzanne Kershisnik. And there it was, Shakespeare. Young people doing it. Pretty well. Down to the eight-year-old, for whom this production of “Twelph” (suddenly that looks wrong), “Tweltph” (holey moley, am I sick!) “12th Night” is her sixteenth (that’s “16th,” just wanna be sure I have it right) role in a Shakespeare play. And every time, it was a different Shakespeare play!

I told one of the more mature players (her big brother) that watching him act was like opening one of those 124-color flip-lid boxes of Crayolas, with all the points still sharp and the labels still clean.

My nine-year-old and my six-year-old were riveted. And though my nine-month-old didn’t really get it (we worry about her), her thirty-five-year-old brother liked it a lot. That’s what I call pretty close to a hundred percent successful. The Kanosh Acting Company showed up, and then some.*

[*Many doubt that an actor who lived in the relatively hick town of London, a guy who had neither traveled to smarty-pants Italy much nor hung out in the royal courts thereof (not to mention the royal courts

of ancient Greece) and who had no truck with fairies could have written these plays, and so assign their authorship to somebody with a more sophisticated pedigree and unlimited frequent flyer miles. There are five reasons why this line of thinking should be abandoned:

Reason One: In a recent computer word-count analysis of the plays, a word previously little-used (or never-used) in a Shakespeare play would show up in the speeches of a particular character in a

particular play, a character known to have been played by Wm. Shakespeare, the actor. In the next play written by Wm. Shakespeare, the playwright, that word would appear scattered throughout the speeches of all the characters. It happened over and over again, with perfect consistency. Without thinking about it, Wm. the playwright would use the fresh word he’d just been speaking as Wm. the actor for six nights a week and a Saturday matinee. (This column is not called “Backstage Graffiti” for nothing!)

Reason Two: Anybody who thinks the genius of a guy like Wm. Shakespeare is impossible has never met Jos. Smith.

Reason Three: If the authorship were to be assigned to the Earl of Oxford (the prime contender) then all over the world you would have these “Oxford Festivals.” Kind of a footwear image, if you ask me. Could give rise to giggles.

Reason Four: If the authorship were to be assigned to Francis Bacon (the traditional usurper) you would have “Bacon Festivals,” which is not to be borne.

Kanosh is a couple blocks long (Utah blocks are, admittedly, bigger), from end to end. And Main Street, the primary arterial, is nearly as wide as the town is long, four fat lanes (so Brigham Young could turn

his wagon around without backing up ((the awkwardness of which would be, for the most part, lost on modern readers – except maybe the Amish, a marketing segment which, I am assured by the Meridian

I’ve included the address here so you can go see a show. It’s totally worth it. Suzanne Kershisnik conceives miracles. Or maybe Shakespeare did, and Suzanne just bravely and zestfully midwife’s

them. Check it out at www.miraclemidwifery.com. No, wait. Try www.kanoshactingcompany.org. Dot org, mind you. This is to be taken seriously. 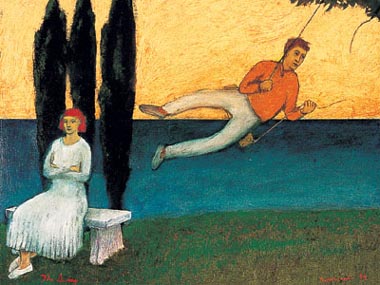 Also he has these astounding pictures into which angels unapologetically intrude. (One that sort of sets my mind on fire has about a hundred fifty angels flying in from the sides, pretty much singing their brains out – and they’re all crammed into a stable!

I wanted a Kershisnik image with angels for my Christmas CD that was so shamelessly hawked here on Meridian a month ago, but the recording was made in too much of a fevered hurry ((oooh, let’s not say

“fevered” anything here, okay?)) to put something together. So I went with Leonardo da Vinci instead. In art, it’s really good to have a deep bench.)

Before the play, we wandered through the slash studio where paintings in progress, lots of them of a size my little son would call “Gy-normous,” stand three deep against the walls. (The slash building is pretty sizable, used to be a dance hall slash skating rink slash basketball gym slash city hall, slash convention center for evil spirits ((well, maybe just sad spirits – maybe even just spirits burdened with an unhealthy measure of ennui)). It has one of those wonderful nineteenth-century “pressed tin” ceilings, which I think

were conceived as good for FM reception.) I was particularly intrigued by the notes the artist had scrawled to himself in the margins and unpainted spaces in the pictures – things like “Use such-and-such a color (which I never heard of) here.” And sometimes he noted the projected finished proportions, because that’s how these pictures’ prices are determined. By acreage.

One painting I particularly liked (it had a couple of people doing sort of ballet handstands ((which real ballet people, being on the stuffy side, would never dare, at least not without their fingers scrunched into pointy gloves)) on a stage, with a glimpse of a pianist in the wings. Or, well, wing). There were the usual color slash acreage notes in the artist’s hand. Then, in the top margin, two more faintly penciled notes. The first was “Left door jam?” (Spelling is really a kind of paltry left-brain concern, if you think about it.) But the second penciled note is the one I am enriched for having read. “Make everything very interesting.”

I told Brian that a lesser artist (Oxford, Bacon, Leonardo) might have reminded himself to make everything interesting, but the great artist (Wm. Shakespeare, Br. Kershisnik, Suz. Kershisnik) goes for

the “very interesting.” And that’s the ten percent that wins the doggone game.

Good night. Er, morning. My head hurts. How about yours?