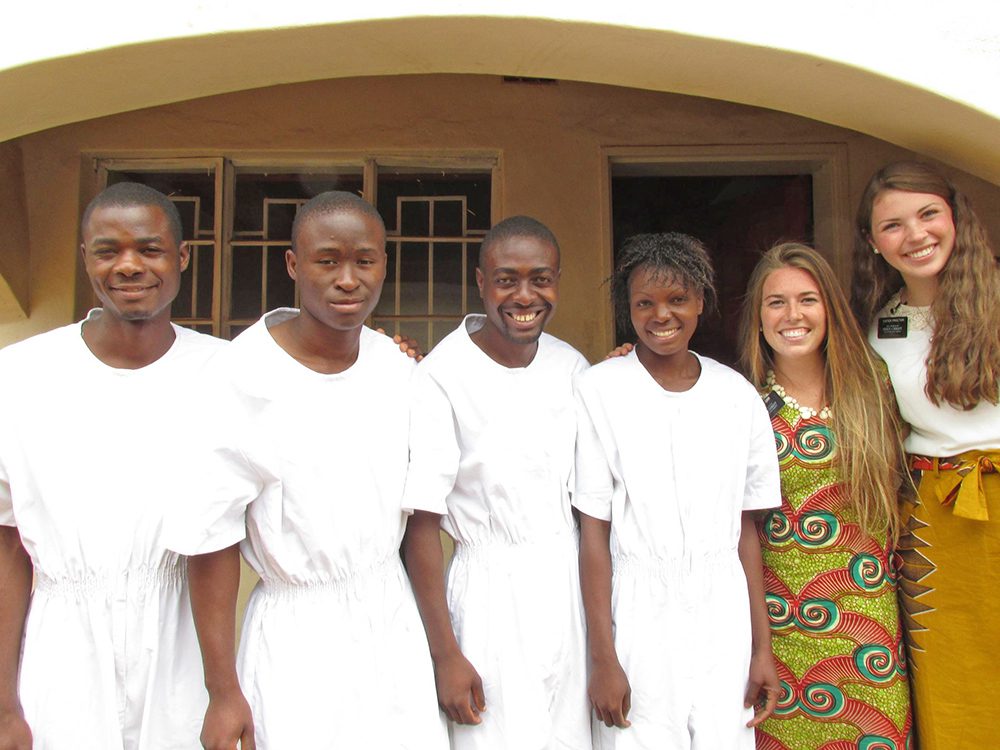 Elder Tatenda Ndunduma of Zimbabwe, Africa, was recently sealed to his deceased parents in the Accra, Ghana, temple, with Elder and Sister Malmrose standing in as proxy.  The day before two missionaries had performed the baptisms for his parents in the Temple.

Tatenda’s arduous journey to the temple and the mission field began January 26, 1994 when he was born in Harare, Zimbabwe.  When he was three years old and his brother was seven, his father became very ill.  At the peak of his sickness, he could not stand or eat, and could hardly breathe.  His mother entered his hospital room and upon viewing her husband in his weakened condition she collapsed to the floor and died.  His father, because of his comatose condition, was not even aware that his wife died and he died just two days later.

Tatenda, as a new orphan (one of almost 2 million orphans in a country with a population of just over 12 million), was then sent to live with his aunt (sister of his father) and his grandmother.  Two years later his grandmother also passed away.  His aunt took on part-time work to provide food and often her two children and Tentenda were left alone.  None of the children knew how to cook for themselves.  When Tatenda was 10, his aunt took him to a small town called Bindura (40 miles north of Harare) where he finished primary and secondary school.

At the age of 16 his sweet aunt died and so he was left to live with her husband and a son who was his age. Life was hard and Tatenda would often cry wishing that his parents were still alive.  He had already buried 4 caregivers.   He was eventually sent back to Harare, Zimbabwe, to live with another aunt and there he was finally able to be reunited with his brother who was 20 at the time.  (For many years, Zimbabwe has suffered from hyperinflation and massive 80% to 95% unemployment rates.  Recent estimates are that in excess of 1.6 million children are currently struggling as orphans in Zimbabwe.)

Tatenda now knows that this move to the capital city of Harare was also for a divine purpose. Simbarashe, the son of his aunt, was a member of the Church of Jesus Christ of Latter-day Saints, and invited him to attend some LDS church meetings.  Tatenda was soon introduced to the Mormon missionaries and listened intently to the missionary lessons.  However, it was not until he heard the lesson about the plan of salvation that he was completely converted to the restored gospel.

It was the sweetest message he had ever heard in his young life and changed his tears of sorrow to tears of joy.  He had previously thought that he would never see his parents again, having never heard of life after death.  Feeling the Spirit of the Lord, he asked to be baptized on November 17, 2012.  From that point on, he was a changed man.  He knew that it was his responsibility to make certain that his parents were both baptized by proxy in the temple and sealed together as a forever family. Now that dream has become a reality.

One of Tatenda’s goals was also to serve as a full-time missionary.  Three LDS professional golfers, Lolly Maritz, Reeve Nield and CC Lundgreen, (mentioned recently in this Meridian article) helped him to accomplish his goal of serving a mission.  He entered the MTC in Ghana and is now serving in the Ghana Cape Coast Mission.  His desire is now to bring many souls unto Christ and to enjoy the joy the same blessings that he is enjoying.  Tatenda is fond of saying: “I know the Lord will always watch my back throughout my mission.”