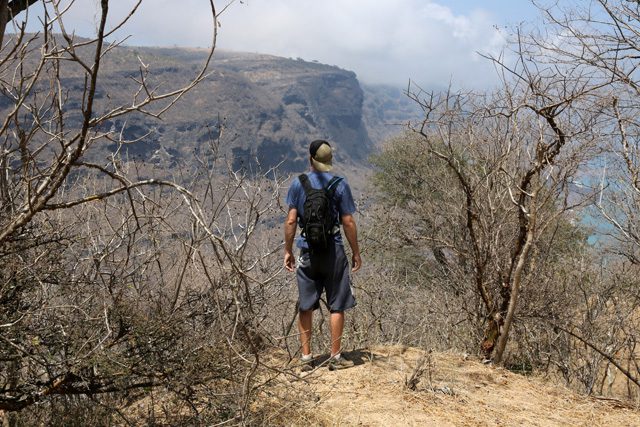 All photographs are by Scot Facer Proctor

One of my favorite parts of Nephi’s story is his interaction with the Lord in the place called Bountiful. I love Nephi’s faith. I love his obedience and his strength. I love his understanding of their wilderness journey. I love when the Lord asked him to up to “the mountain” to receive instructions. This means that at the place Bountiful there is going to be a proximate mountain. I think by the way the text reads this mountain is going to be very obvious to Nephi and to the others in the camp.

So, if this place, Khor Kharfot, where we have taken you these past two weeks in Southwestern Oman is indeed the place Bountiful, where Nephi built the ship, then there has to be an obvious mountain—a proximate mountain. We talked about that fact in the article about the 12 Criteria for it to be Bountiful.

We had a very interesting discovery reading the text more carefully while we were there at Khor Kharfot in Oman. Watch this brief video to learn that discovery and then I will take you on a hike on this very mount at Nephi’s Bountiful.

Nephi’s Bountiful – Going “into the mountain”

If you just watched this four-minute video you learned that the text is very specific about Nephi going “into the mountain” and it repeats that pattern consistently four times. What does that mean? Does it mean Nephi was going up into a cave? That’s possible. Was there an overhang or an opening that would qualify for this description? I always pictured Nephi going to the top of a mountain (similar to Moses going to Mt. Sinai in our mind’s eye) not “into the mountain.” We wanted to check out every possibility we could in the short time we had.

There is a four-wheel-drive road from the high desert that leads through a small village and onto the summit of what we in our camp called “Nephi’s Mount.” We decided to take that road, leave our car at the top for a few days and hike down to the wadi and explore as we went down.

We were unsure where the entrance to the road was but, in answer to our prayers for guidance, we ran into a British explorer, Lawrence Ball, who “happened” to pull up by our side in his vehicle and asked if we needed any help. We told him where we wanted to go and he offered to let us follow him the entire way and he would get us there. What a blessing. Lawrence had been coming to Khor Kharfot for 12 years and knew all the surrounding areas as well. Every back road, every side path. We were so grateful for his help.

We did not have to start at the very summit of the mountain. We were able to drive a little ways down and then park our car. Here I set my GPS and “runmeter” that I always use for exercising, so that we could measure the descent. In just over three hours we would descend 2,103 vertical feet to our camp.

We checked out everything we could as we went along. We were observing all the different kinds of flora. There were aloe vera plants, cactus plants and numerous kinds of trees. We were glad we were hiking in the driest time of the year because the leaves were mostly gone from the trees and we could see all around us as we hiked.

We saw a number of termite mounds as we went along. We saw leopard scat. We saw multiple kinds of butterflies. Everything was fascinating and we also had to be very careful in the steep descent, as some of the way was very treacherous.

Lawrence Ball told us that the British had put in some blue ropes in some areas along the cliffs so that the hike would be safer. We were very grateful for these ropes and for the heads up that they were there.

I kept looking for a great view to take pictures. I was also looking for an altar of any kind—Nephi’s altar. We looked out at one of the cliffs and noticed one point that was very attractive to us.

We saw that prominence from a couple of angles and were able to get quite close to it. It is likely a natural formation but certainly appeared to be a great place to pray.

The scripture went through my mind: “And it came to pass that the Lord spake unto me, saying: Thou shalt construct a ship, after the manner which I shall show thee, that I may carry thy people across these waters.” (I Nephi 17:8) It seemed like Nephi would have certainly been looking out over this vast Arabian Sea that he first called “Irreantum, which, being interpreted, is many waters.” (I Nephi 17:5) It was a thrill to think that we were possibly on the same mount where Nephi had been those twenty-six centuries earlier.

The five of us continued to make our way down the mountain. One of my favorite scriptures from Nephi’s record kept going through my mind, one that I memorized and have used for my whole adult life: “And I, Nephi, did go into the mount oft, and I did pray oft unto the Lord; wherefore the Lord showed unto me great things.” (1 Nephi 18:3)

I have taken that as a pattern for learning in my own life.  Now, here I was, likely on the very mountain where Nephi had come so often to receive revelation from the Lord. What kind of things did the Lord show to Nephi—especially the things that he referred to as great? Did Nephi receive visions and directions here on this mountain that were as great as what he had received at the sacred mountain near the Valley of Lemuel? (1 Nephi 11: 1,2 and 1 Nephi chapters 11-14 inclusive)

Our team talked about some of these things as we kept hiking down the mountain. The temperature was now over 100 degrees Fahrenheit. Fortunately we had plenty of water and we had energy bars and snacks in case we needed them. My mind never turned to food. I just thought about Nephi over and over again.

We explored every crevice and opening that we could easily get to.

We were not there to rappel off cliffs and try to lower ourselves into remote caves. These caves have never been explored by anyone in our team or in previous teams that we are aware of. There is much work to be done here.

As I looked down into the wadi I wondered how this inlet looked six hundred years before Christ. Was it a small harbor with this fresh-water source flowing into the ocean? Was the inlet deep enough at that time to build a dry-dock ship, then put it into the inlet and float out into deeper water for loading as they were readying to leave? What does it mean when the record says they did go “down into the ship” four different times? They means they had to come from somewhere above the ship. What event caused the sand to blow across the inlet and block its path to the sea? How much more verdant was this area twenty-six hundred years ago? Many of these questions can be answered as we continue our research and sending in teams of specialists to thoroughly explore this area.

We got near the base of the mountain all too quickly. I had been looking forward to this hike for many years. It lasted just over three hours.

I nearly ran into an unexpected spider that was the same size as my hand span. We observed it carefully and happily walked around it.

There are plenty of large trees in the area with which one could make a ship to carry forty or more people and all their seeds, food, animals and supplies they would need to carry them 2/3 of the way around the globe. I pondered Nephi’s statements about the building process: “And it came to pass that they [his brothers] did worship the Lord, and did go forth with me; and we did work timbers of curious workmanship. [I’ve always pondered what that means.] And the Lord did show me from time to time after what manner I should work the timbers of the ship. Now, I, Nephi, did not work the timbers after the manner which was learned by men, neither did I build the ship after the manner of men; but I did build it after the manner which the Lord had shown unto me; wherefore, it was not after the manner of men.” (1 Nephi 18:1,2) These scriptures came alive for us as we were actually hiking on what is very likely Nephi’s mount. Every tree took on new significance.

We were glad to hit the wadi and hike across the familiar area to get back to our base camp.

Of course we had all done much more difficult hikes in our past experiences. Of course we had hiked larger mountains and more remote areas on earth. But, we were filled with a sense that we had just hiked down a significant place and had possibly crossed the path of one of our favorite heroes who had ever lived: Nephi, son of Lehi.

We desire to continue our research here in this place. Will you help us today with a generous tax-deductible donation to The Khor Kharfot Foundation? You can read all of our articles on this project by clicking here.