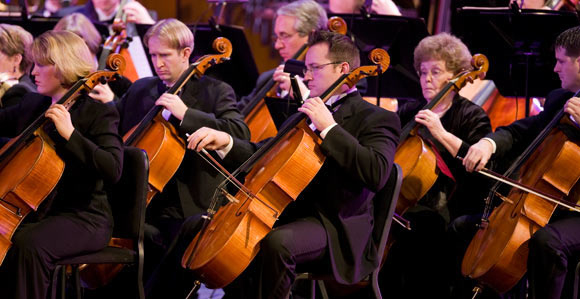 SALT LAKE CITY The Orchestra at Temple Square will celebrate its 15th anniversary with one of Tchaikovsky’s most beloved works featuring 19-year-old piano prodigy George Li under the direction of acclaimed conductor, Igor Gruppman.

The concert, on Friday, October 17, and Saturday, October 18, at 7:30 p.m. in the Tabernacle on Temple Square will open with Tchaikovsky’s Piano Concerto no. 1 in B-flat Minor, op. 23.

Originally written in 1874 and revised several times, the concerto is one of Tchaikovsky’s best known orchestral pieces. Mr. Li will be the soloist for the piano concerto whose talent the Washington Post praised for combining “staggering technical prowess, a sense of command and depth of expression.”  Mr. Li, winner of multiple awards and competitions, gave his first public performance at the age of 10 in Boston’s Steinway Hall. He currently is a graduate student in a joint program at Harvard University and the New England Conservatory of Music.

The second half of the concert will feature Camille Saint-Saens’s Symphony no. 3 in C Minor, op.78 (“Organ”). The piece was written in 1886 at the height of Saint-Saens’s musical career. It is popularly known as the “Organ Symphony” even though the organ is featured only on two of the symphony’s four movements. Tabernacle organist Clay Christiansen will perform the organ parts on the symphony. Christiansen has been a Tabernacle organist for over 30 years, having also held positions at St. Mark’s Cathedral and with Congregation Kol Ami. He holds a doctorate in music composition and master of music degree, both from the University of Utah, as well as a bachelor of music degree from Brigham Young University. Christiansen’s solo performances have taken him across the United States, Canada, and England.

Gruppman was named conductor of the Orchestra at Temple Square in 2003. He enjoys a career as a violin soloist, conductor, concertmaster, and chamber musician and has appeared in the great European capitals and in the major cities of North America, Israel, and New Zealand. He has been a frequent guest with such orchestras as the London Symphony Orchestra and the Royal Philharmonic and has worked with conductors Sir Georg Solti, Mstislav Rostropovich, Sir Colin Davis, Christoph Eschenbach, and Bernard Haitink. In addition to his duties with the Orchestra at Temple Square, he is currently concertmaster of the Rotterdam Philharmonic Orchestra.

The Orchestra at Temple Square was formed in 1999, under the direction of Gordon B. Hinckley, then President of The Church of Jesus Christ of Latter-day Saints. Its charter as an all-volunteer musical organization then and now is to accompany the Mormon Tabernacle Choir and to perform in two concerts of its own each year.