The First Presidency has announced open house and dedication dates for the Phoenix Arizona Temple of The Church of Jesus Christ of Latter-day Saints. The public is invited to visit the temple during an open house from Friday, 10 October, through Saturday, 1 November 2014, excluding Sundays. Free reservations for the open house can be made starting Monday, 29 September 2014 on the www.phoenixmormontemple.org website. 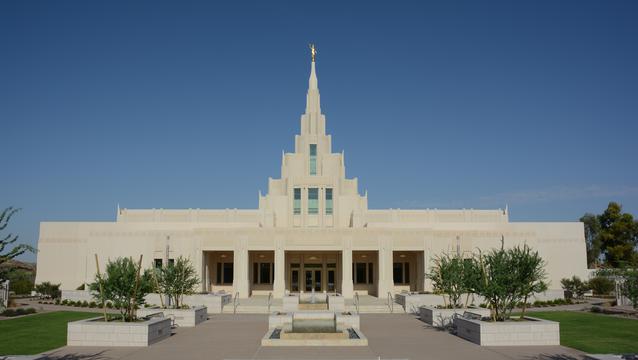 The temple will be formally dedicated on Sunday, 16 November 2014, in three sessions. In conjunction with the dedication of the temple, there will also be a cultural event featuring music and dance on Saturday, 15 November 2014.

Ground was broken for the Phoenix Arizona Temple on 4 June 2011. Elder Ronald A. Rasband, of the Presidency of the Seventy, presided at the ceremony and said the new building would be a “beautiful and magnificent temple” that will bless both Mormons and the Phoenix community.

The Phoenix Temple sits on just over five acres adjacent to an existing meetinghouse located at the intersection of Pinnacle Peak Road and 51st Avenue. It is a single-story building and has a footprint of 27,423 square feet with a full basement and a 90-foot spire. The materials and workmanship are of the highest quality, and the grounds are created and maintained to bring a sense of peace and tranquility to those who enjoy the grounds and the surrounding community.

While the Churchs thousands of meetinghouses are open to all people who wish to attend religious services, temples, after they are formally dedicated, are open only to faithful Latter-day Saints. Temples are considered “houses of the Lord” where Christs teachings are reaffirmed through marriage, baptism and other ordinances that unite families for eternity. Inside, members learn more about the purpose of life and make promises to serve Jesus Christ and their fellow man.

Once dedicated, the Phoenix Temple will be the 144th operating temple of the Church worldwide. It is one of five temples in Arizona, with others in Mesa, Snowflake, Gila Valley and, most recently, Gilbert. A sixth temple, in Tucson, has been announced.

We've been snowbirds for four winters and have watched with interest the building of this temple. It means so much to the members in the west valley. We have made friends we want to bring to the Open House.