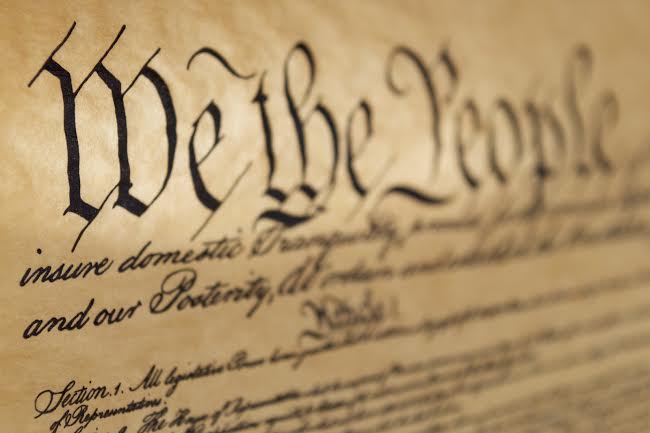 Editors Note: This is another in a series of excerpts from the book “The War in Heaven Continues: Satans Tactics to Destroy You, Christianity, the Family, the Constitution, and America” by Gary Lawrence.

Next week: “About That Food Storage You Thought You Owned”

Meridian readers can now reserve a personally inscribed copy of The War in Heaven Continues. This 300-page book will be published in September and sell for $15.95. FREE SHIPPING for all orders received before publication. No need to pay now. Simply reserve your copy at: [email protected]. We will contact you when the book is ready and you can indicate to whom you want the author to inscribe your book.

Jay Leno once cracked, “They keep talking about drafting a constitution for Iraq. Why dont we just give them ours? It was written by a lot of really smart guys, its worked for over 200 years, and were not using it anymore.”

I cant speak about what the Egyptian experience should be, because Im operating under a rather old constitution. The United States, in comparison to Egypt, is a very new nation; and yet we have the oldest written constitution still in force in the world. I would not look to the U.S. Constitution if I were drafting a constitution in the year 2012. I might look at the constitution of South Africa.[1]

She took an oath to support the Constitution. Doesnt that imply speaking well of it? Why the assumption that old must be inferior to new? And South Africas is better than ours? She muffed it big time.

Not surprising. The Constitution is under attack typified by the cynical jab, “What could a bunch of old white men who lived two centuries ago possibly understand about our problems today?”

Ironically enough, on the other side is another group of old white men led by Woodrow Wilson, the first president to publicly criticize the Constitution. Wilson spoke of grave defects in “this miserable delusion of a republic,”[2] and throughout his political career was often openly hostile against the Constitution calling it pre-modern, cumbersome, and open to corruption.[3] (Yet he was an admirer of William Gladstone who had the opposite impression of its character describing it as “the most wonderful work ever struck off at a given time by the brain and purpose of man.”[4])

Wilson and his allies Louis Brandeis and Oliver Wendell Holmes, Jr. (he who bragged, “All my life I have sneered at the natural rights of man”[5]), pushed the idea of a “living Constitution.” Carried forth by Richard Ely, John Dewey, and Herbert Croly, among others (all together a fine set of ODWM), the phrase   implies that the Constitution is an organism that evolves over time rather than a set of timeless principles. Of course, the Constitution is living in the sense it can be changed through an amending process, but Wilsonites use the “living” idea to stretch original wording to cover the latest social engineering theories and schemes that the Constitution should “be understood as a vehicle for change rather than a means of constraint.”[6]

Whats frustrated people is that I have not been able to force Congress to implement every aspect of what I said in 2008. Thats just the nature of being president. It turns out our Founders designed a system that makes it more difficult to bring about change that I would like sometimes.[7]

That is precisely the point, Mr. President. Our Founders designed the system so that one persons agenda, no matter how firmly he may believe its benefits, would be difficult to bring about and must be difficult if improper uses of power are to be stymied.

(Can you imagine a member of the Church whining that following the requirements for temple attendance makes it difficult to implement his own agenda?)

The battle today pits two very contrasting viewpoints about mankind, rights, power, and government. Here are the key points from the Declaration and the Constitution as written by the Framers, and the opposing school of thought by Wilsons intellectual descendants labeling themselves Progressives.

The Constitution is a living document, not a mechanistic one. It is an organism that evolves according to the changing needs of society as determined by those in the best position to judge. Government must be limited. A society with too much government becomes tyrannical. Government must expand as needed.   A society without sufficient government becomes anarchic. The Constitution is what the Constitution says it is. The Constitution is what the Supreme Court says it is. Justices should utilize case studies from other nations in their rulings about the Constitution. Laws, properly and constitutionally created by representative government, govern society. We are a nation of laws, not of men. There will be circumstances where exemptions from the law, such as for Congress and its staff, must be granted to ensure efficient functioning of government. Law is the great leveler. All citizens stand equal under the law; no one is above the law. Law is a tool in the hands of experts to bring about the well being of society as a whole. Limited government honors the agency of man; ever-expanding government diminishes it. Power concentrated in the hands of non-partisan experts is the most efficient model of government. Such concentration facilitates unity of purpose and action rather than gridlock and squabbling. Three methods keep power in check and restrain leaders from abusing it: (1) separation of powers between the three branches of government; (2) division of powers between the states and the federal government; and (3) specific enumerated powers all others revert to the states and/or the people.   Separation and division of powers impedes progress and prevents government from acting in unison.   Experts from a mature polity can accomplish more for the nation if freed from the checks and balances of power. Legislation originates in Congress and is implemented by the executive. Government policies should originate and be implemented by the same people, as in the British parliamentary system. There shall be no aristocracy and government shall not grant titles. Circumstances of birth confer no right to rule. There shall be no aristocracy by birth, but educational titles are useful in selecting administrative experts. The judicial branch should protect freedoms and render decisions based on the original intent of the Framers of the Constitution. The judicial branch and elite law schools play a path-breaking role to discover new powers for the administrative state. Maximum individual freedom is the best road to prosperity for all. Maximum power centered in the administrative state is the best road to prosperity for all.

I, too, was stunned by the comment you included where Obama is frustrated because he cannot "force congress" to implement his every whim. I wish Obama knew 'no one is above the law." Unfortunately, he ignores the laws he doesn't like and tries to (in his own words) "force" his will, rather than honor the will of the people.

Well said, Gary. Thank you for standing up for the Constitution and exposing the mistaken philosophies of those who oppose it.