Death in the Trek: A Study of Mormon Pioneer Mortality « Meridian Magazine

Death in the Trek: A Study of Mormon Pioneer Mortality

The final stanza of the Mormon pioneer anthem “Come, Come Ye Saints” directly confronts the prospect of dying on the trail: “And should we die, before our journeys through”

Now new research shows that pioneer mortality rates were not much greater than national averages at the time. 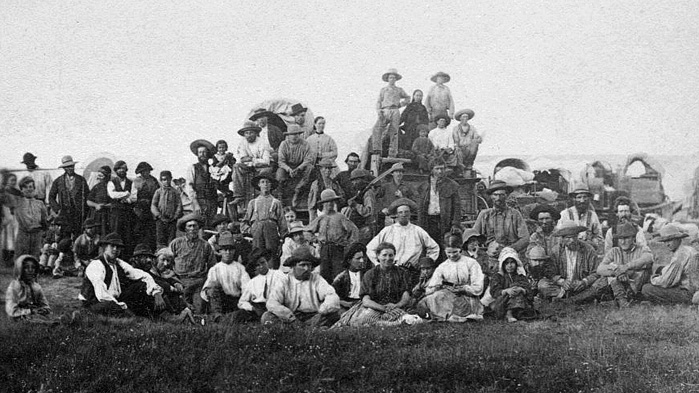 This may come as a surprise to modern Mormon youth whove participated in handcart treks.

“The youth go out and learn that a lot of people died and they push the handcart and after three days they think they are practically dead,” said retired historian Mel Bashore. “But most people traveled in wagons to Utah. The whole Mormon trail movement that spanned 20 years was a really successful endeavor.”

Bashore worked with a team of actuarial scientists at Brigham Young University to analyze 56,000 pioneer records from 1847-1868. Of these 56,000, there were an estimated 1,900 people who died either on the plains or within the calendar year of their arrival. That is about a 3.5 percent mortality rate, whereas a national comparison group in 1850 experienced an annual mortality rate between 2.5 percent and 2.9 percent.

“Everyone knows about pioneers, but what are the data, and what are they saying?” said Dennis Tolley, a BYU statistics professor and co-author of the new study. “This is one of the first definitive analyses with the most up-to-date data regarding how many people there were in this immigration, how many pioneers died, and the breakdowns of these deaths.”

Consulting pioneer journals and family histories, Bashore and Tolley worked with eight BYU students to confirm how many people came over and how many died along the way.

Many of those who died suffered from illnesses common to the time period such as cholera or dysentery. There were also considerable risks from some form of accident along the immigration trail, such as being run over by a wagon, stampeded, or accidentally shot.

Only four deaths reported were from Native Americans, two were eaten by wolves, two suffered a poisonous bite or scorpion sting, and one was murdered.

The pioneers mode of travel proved a major factor. Those travelling by wagon saw a mortality rate of 3.5 percent.  But the mortality rate for the roughly 3,000 who traveled by handcart was higher.

The ill-fated Willie and Martin companies suffered a 16.5 percent mortality rate. These two handcart companies left in late July of 1856, and this late departure date led to these companies experiencing many hardships in the winter months with the eventual need for rescue wagons sent from Salt Lake.

Since this story is told so often, theres a perception that such hardship was the norm.

“If you take out the Willie and Martin handcart company and look at the mortality of those in handcarts compared to the pioneers travelling by wagon, the mortality is still much higher,” Tolley said. “Those travelling with handcarts were presumably poorer, malnourished, and all sorts of other factors.”

The gender breakdown of the Mormon immigrants that came over is quite balanced, with 26,615 females and 28,306 males. In conjunction with the balanced number of females versus males in the data, their mortality rate is also quite similar with females at 3.6 percent and males at 3.3 percent.  Interestingly, almost half of the immigrants were under the age of 20, and the mortality rate for this age demographic was a surprisingly low 1.75 percent.

For some reason, pioneer babies fared better than expected on the trail given infant mortality rates at the time. Tolley isnt certain about the cause – but one possible explanation is that some expectant mothers chose to wait and make the journey after a successful delivery.

Bashore recently retired after 38 years with the LDS Church History Library. Tolley is currently the chair of the BYU statistics department. The researchers in-depth analysis will be published in a forthcoming issue of BYU Studies.

“Statistical tabulations of data gathered from records and diaries do not illustrate the difficulties, perils and miracles experienced by the pioneers,” the study authors write. “Though we cannot pretend to understand such trials and blessings from the tables and figures presented here, surveying many journals in gathering these data has presented sketches of the trials and tender mercies of the Lord.”