Editors Note: This is another in a series of excerpts from the book “The War in Heaven Continues: Satans Tactics to Destroy You, Christianity, the Family, the Constitution, and America” by Gary Lawrence. The book will be published in September. To see the previous chapter, click here. 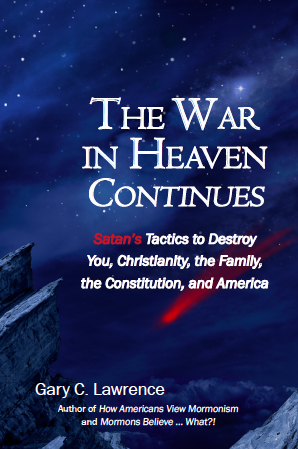 My mind at times wanders back to another sphere and wonders what the war in heaven was like. Perhaps yours as well? It would be interesting to have the details presumably there were debates, conferences, lots of individual conversations but from what God has revealed, we glimpse insights.

Our Father convened the Grand Council in heaven and presented His plan for our progress. That “the morning stars sang together, and all the sons of God shouted for joy,”[1] rather than asked for time to think it over, indicates that we were aware of and had longed for such an opportunity.

The Fathers plan of salvation aka plan of redemption, plan of happiness points to one supreme strategy: Provide the setting and the conditions that would give us the greatest chance to progress and achieve exaltation.

Then came the hinge event. Given the answers they gave, both spirits who responded had obviously had time to think about it. One selflessly thought in terms of doing the Fathers will; the other saw it as an opportunity for mutiny.

Other scriptures add detail. God told Moses that “Satan came before me, saying Behold, here am I, send me, I will be thy son, and I will redeem all mankind, that one soul shall not be lost, and surely I will do it; wherefore give me thine honor.”[3]

A couple of points here. We dont know whether Lucifers pitch for the Fathers power happened during the Grand Council or in a later attempt to bargain, but it is obvious that he wanted more than an “Attaboy, Luce” pat on the back for redeeming all mankind. Lucifer wanted the Fathers honor, which we know from D&C 29 is Gods power.[4] It was a naked power play.

Next, when Lucifer became angry and abandoned his first estate, “at that day” many followed him, which seems to suggest that pre-recruiting was underway before Lucifer pulled the trigger.

A little deductive reasoning suggests that Lucifer had to have guaranteed his followers they would have everything God was offering to those willing to enter mortality, but without the risk, without the hard work. Otherwise they would not have followed him. The clincher in his argument had to be the promise that they would have bodies, even though he knew he didnt have the power or the know-how to create them.

His deceit: His followers would not have their own bodies, but would occupy the body houses God would create for His followers. House squatting of the first order. That this “father of all lies”[5] couldnt even deliver that is now obvious. As Hobbes once said to Calvin, “Nice try, Pinocchio.”

The revelation to Moses continues:

Wherefore, because that Satan rebelled against me, and sought to destroy the agency of man, which I, the Lord God, had given him, and also, that I should give unto him mine own power; by the power of mine Only Begotten, I caused that he should be cast down.”[6]

Lucifers arrogant ambition sparked the war in heaven. He coveted the Fathers power, sought to destroy the agency of man, wanted to displace Jesus Christ as the Only Begotten, and rebelled against everything the Father stood for. God reaffirmed that Jesus Christ was chosen from the beginning (Jehovah had already created many worlds under the direction of the Father) and to solidify that point caused that Lucifer be cast down “by the power of mine Only Begotten.”[7]

In other words, for emphasis of Who is in charge, He had Christ deliver the message and personally cast him out.

How art thou fallen from heaven, O Lucifer, son of the morning! how art thou cut down to the ground, which didst weaken the nations!

For thou hast said in thine heart, I will ascend into heaven, I will exalt my throne above the stars of God: I will sit also upon the mount of the congregation, in the sides of the north:

I will ascend above the heights of the clouds: I will be like the most High.[8]

Had Lucifer been successful, do you really think he would have endured suffering and humiliation, and have given his own life on the cross so we could be empowered, progress, and become like God? Are you kidding?

In contrast to this arrogance, the Savior said simply, “Father, thy will be done, and the glory be thine forever.”[9]

In this continuing war that started in heaven, some participants have bodies but no memory; others are without bodies but apparently retain a memory of the pre-mortal existence. Before Jesus cast the evil spirits into the herd of swine, as given in Matthew 8, they appeared to know who Jesus was and had a knowledge of their eventual fate for they said, “What have we to do with thee, Jesus, thou Son of God? Art thou come hither to torment us before the time?”[10]

We dont remember them, but they remember us.  Their memory of who we are makes our job tougher.

All part of the test.

Gary Lawrence is a pollster and author who lives in Orange County, California. He welcomes comments at [email protected].