"Depart From the Tents of These Wicked Men" | Meridian Magazine

“Depart From the Tents of These Wicked Men” 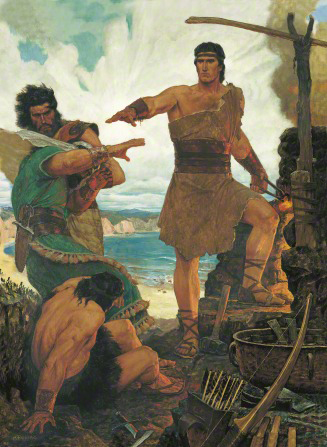 By the 5th chapter of 2nd Nephi, Laman and Lemuel had decided once again (this was the fourth time) to kill Nephi. By this point in their history, their hearts had become hard “like unto a flint” and the Lord seemed to have no way to soften them anymore (See 2 Nephi 5:21).

He had softened them before. In 1 Nephi 2:14, Lehi spoke to his rebellious sons in the power of the Spirit and they trembled and repented. In later chapters they were humbled by a written message from the Lord (1 Nephi 16:26,27), by the voice of the Lord (1 Nephi 16:39), by the threat of divine punishment (1 Nephi 17:48), and by a life-threatening storm at sea (1 Nephi 18:20). But the time finally came when their hearts were so hard (flint-like) that they could not be softened any more.

However, the Lord wanted the Lamanites around to remind the Nephites to be righteous.

“And the Lord God said unto me: They shall be a scourge unto thy seed, to astir them up in remembrance of me; and inasmuch as they will not remember me, and hearken unto my words, they shall scourge them even unto destruction” (2 Nephi 5:25).

It was at this point in the narrative that the Lord instructed Nephi to find a new place to live. He departed from their land of first inheritance with the faithful.

Thus, Nephi and Zoram and Sam and their families, “and Jacob and Joseph [the] younger brethren, and also [his] sisters, and all who would go with [him] . . . did journey in the wilderness for the space of many days” (2 Nephi 5:6,7).

It was more than the danger of death that caused Nephi and his followers to depart. The Lamanites had been cursed. And they had been marked with a skin of blackness so that the Nephites would know they were cursed and stay away. Their cursing was a sore cursing, because of their iniquity. (2 Nephi 5:20,21; see also 2 Nephi 1:17,18,22) They were cut off from the presence of the Lord. They had no scriptures. They had no priesthood. They had no revelations. They had no temple. They had little or no access to the Spirit. A sore cursing indeed! The Lord did not want the Nephites anywhere near influence of such people.

When my mother remarried after 19 years of widowhood, she chose a man of steel and certainty. He was my old scoutmaster and he was rugged. She learned not long after their wedding that her new husband suffered from a chronically sore big toe. It pained him greatly, but it was just a sore toe and he was tough as saddle leather. However, she was tougher and she got him to the doctor. An examination revealed melanoma. The toe was amputated.

One might ask, “Why?” It was just a toe. The disease was serious but it was localized in an appendage a long way from the center of things. Why all the fuss? We all know the answer. Cancer doesnt secure a toehold (sorry!) And stay put. It is always looking for an opportunity to expand. When you find a cancer, you get it out.

My stepfather had waited too long to do that. Within a year of the surgery, he was bedridden and riddled with cancer. All that could be done was to make him comfortable and wait for him to die.  Nephi leaving Laman and Lemuel was an act of amputating the cancer. Nephi must have known the great need to put distance between the righteous and the disease. And so, with all those who feared the cancer of unrighteousness, he packed up and pulled out.

The Lord has warned us many times about the danger of spending time in places where such conditions can influence us. In Numbers 16, the Lord warned the congregation about those who had rebelled against Moses and Aaron. Moses counseled the people:

“Depart, I pray you, from the tents of these wicked men, and touch nothing of theirs, lest ye be consumed in all their sins” (Numbers 16:26).

That is exactly what Nephi did. He departed from the tents of Laman and Lemuel. In the October 1999 Conference, President Packer said it this way:

“Young Latter-day Saints, shape up! Face up! Take hold of your lives! Take control of your mind, your thoughts! If you have friends that are not a good influence, make changes, even if you face loneliness, even rejection” (Ensign, Nov. 1999, p. 24).

If we do not depart from the tents of those who would lead us into wickedness, then the warning of the Lord to Israel about the heathen inhabitants of the Land of Canaan may well become true of us. In Deuteronomy the Lord commanded:

“And when the LORD thy God shall deliver them before thee; thou shalt smite them, and utterly destroy them; thou shalt make no covenant with them, nor shew mercy unto them: Neither shalt thou make marriages with them; thy daughter thou shalt not give unto his son, nor his daughter shalt thou take unto thy son. For they will turn away thy son from following me, that they may serve other gods: so will the anger of the LORD be kindled against you, and destroy thee suddenly” (Deuteronomy 7:2-4).

Later an angel said to Israel, “And ye shall make no league with the inhabitants of this land [of Canaan].” If you do, “they shall be as thorns in your sides, and their gods shall be a snare unto you” (Judges 2:2,3).

The children of those who came out of Egypt “forsook the Lord God of their fathers, which brought them out of the land of Egypt, and followed other gods, of the gods of the people that were round about them, and bowed themselves unto them, and provoked the Lord to anger” (Judges 2:12), and “they went a whoring after other gods, and bowed themselves unto them: they turned quickly out of the way which their fathers walked in” (Judges 2:17).

We must help people who are struggling in sin, of course. But not in their tents and back yards! My sons had friends who were wandering away from the iron rod. But my sons brought them to our house. They watched our TV and raided our refrigerator and played in our back yard. They were exposed, at least to some degree, to people who kept covenants and loved the Lord. They enjoyed an environment of wholesomeness and goodness. I am grateful that my sons chose not to spend time in the tents of these friends, and not to be infected with the cancers of their problems.

I hope that all of us will follow the example of Nephi.

I hope that when our lives or our lifestyles are in danger from those that surround us, that we will pay whatever price is necessary to find a safer places and ways to live.


I am certain that this is one of the major reasons why the Lord so often led his faithful followers to new homes and new lands.

It began with Enos at a terrible time in earths history. “Satan had great dominion among men, and raged in their hearts; and from thenceforth came wars and bloodshed; and a man’s hand was against his own brother, in administering death, because of secret works, seeking for power” (Moses 6:15).

Enos, the grandson of Adam, knew a change was necessary. “And Enos and the residue of the people of God came out from the land, which was called Shulon, and dwelt in a land of promise, which he called after his own son, whom he had named bCainan” (Moses 6:17).

The same thing happened with Abraham, who tells us in the first verse of his book that he had to find a new place to live (Abraham 1). His father had tried to have him killed (Abraham 1:30). The Lord brought the Israelites out of Egypt (Exodus), Lehi out of Jerusalem (1 Nephi 2), Nephi to the Land of Nephi (2 Nephi 5), Mosiah to Zarahemla (Omni 1:12-14), and the Latter-day Saints to Utah.

He will likewise lead us to places of promise and safety if we will stay out of the tents of the wicked.

Go ye out from among the wicked and Babylon with housing, and be ye separate from any houses, house fields, dwelling ships that legally belongs to them. Touch not their unclean dwelling places to save yourselves; be ye clean that bear the vessels of the Lord. D&C 84:115.

Go ye out from among the wicked, and from their houses, housetops, house fields or house ships that legally belongs to them. Touch not those their unclean things and unclean places to escape the desolation there; be ye clean that bear the vessels of the Lord.