Who are the Beautiful Ones? 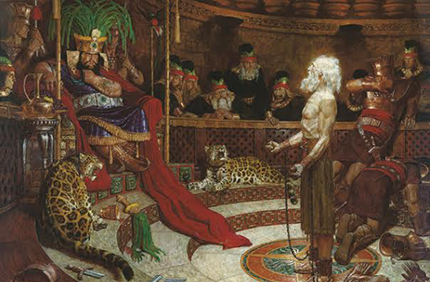 (This article was adapted from the Pillars of Zion series: Click to receive a free copy of Portrait of a Zion Person)

We sing of Zion’s beauty in the beloved hymn:

The Book of Mormon prophet Abinadi spoke of Zion’s beauty in his last discourse when his life was hanging in the balance. The wicked priests of King Noah could have threatened Abinadi with any number subject, but amazingly, they chose the subject of the beautiful ones, those whose beautiful feet convey the gospel message.

And it came to pass that one of them said unto him: What meaneth the words which are written, and which have been taught by our fathers, saying: How beautiful upon the mountains are the feet of him that bringeth good tidings; that publisheth peace; that bringeth good tidings of good; that publisheth salvation; that saith unto Zion, Thy God reigneth,

The scripture referred to the latter-day Zion and her people:

Thy watchmen shall lift up the voice; with the voice together shall they sing; for they shall see eye to eye when the Lord shall bring again Zion; Break forth into joy; sing together ye waste places of Jerusalem; for the Lord hath comforted his people, he hath redeemed Jerusalem; The Lord hath made bare his holy arm in the eyes of all the nations, and all the ends of the earth shall see the salvation of our God?[iii]

King Noah’s wicked priests were employing a satanic trick in an effort to trap and convict Abinadi. A similar ploy was later attempted by a lawyer, who tempted Jesus with a supposedly unanswerable question: “Which is the great commandment in the law?” Jesus’ answer-to love God and to love your neighbor-put to rest the issue once and for all.[iv] In the case of Abinadi, the wicked priests challenged the prophet to interpret Isaiah’s scripture, which had been hotly debated for centuries.[v]

Who were the beautiful ones?

Over the centuries, the so-called scriptural scholars had never agreed; so to pose the question to this supposed madman seemed an easy way to gain a quick indictment. But Abinadi’s powerful answer, like the Savior‘s, silenced his critics. In the end, the wicked accusers on both continents had no evidence to indict their captors, so they executed them for their testimonies: Abinadi testified that “God himself should come down among the children of men,”[vi] and Jesus testified that he was “the Son of God.”[vii]

To the question, Who are the beautiful ones? Abinadi offered an answer that converted a future prophet, Alma. Abinadi’s answer set the doctrinal foundation for the Nephite church and eventually changed a nation.[viii] Alma incorporated the answer into the establishment of his Zion society,[ix] but not before Abinadi gave his life, in part, for his testimony of the beautiful ones.

That Mormon would place such weight on this incident should signal to us its significance as it pertains to Zion. Kent P. Jackson explained:

Abinadi did not answer the question immediately, but after his scathing rebuke of the priests for their wickedness, he taught them about the coming of the Savior as the Suffering Servant, reading them Isaiah 53 in its entirety. He interpreted chapter 53 that God himself should come down among the children of men’ (Mosiah 17:8)-the teaching for which Abinadi would be put to death.[x]

All of the preceding was building like a grand crescendo toward the answer.

And now I say unto you, who shall declare his generation?[xi]

That is to say, Who is capable of discovering the origin of Jesus? Is he really the Son of God, generated by the Father, himself, or was Jesus simply a great teacher and religious leader? Elder Bruce R. McConkie explained:

In the full and complete sense of the word no one ever knows that Jesus is Lord of all except by personal revelation; and all persons to whom that testimony or revelation comes are then able to declare His generation, to assert from a standpoint of personal knowledge that they know that Mary is his mother and God is his Father. And so, in the final analysis it is the faithful saints, those who have testimonies of the truth and divinity of this great latter-day work, who declare our Lord’s generation to the world. Their testimony is that Mary’s son is God’s Son; that he was conceived and begotten in the normal way; that he took upon himself mortality by the natural birth processes; that he inherited the power of mortality from his mother and the power of immortality from his Father-in consequence of all of which he was able to work out the infinite and eternal Atonement.

This is their testimony as to his generation and mission.[xii]

The Testimony of the Beautiful Ones

Therefore, if we can bear testimony of Jesus Christ and who he really is, if we can declare his generation, we are the prophesied “beautiful ones.” We are they who keep Jesus’ commandments, give heed to his prophets, and follow his testator, the Holy Ghost. Beyond being called beautiful, we are also called “his seed.”

Who, therefore, can declare the reality of Jesus Christ, the mission of Joseph Smith, the truthfulness of the Book of Mormon, the actuality of the restoration of The Church of Jesus Christ, or any other essential doctrine? They, who receive such knowledge by revelation from the Holy Ghost.

Who are they? Abinadi said that Christ’s “seed” are they who receive this witness. These are the ones whom the Savior saw and suffered for. How might we come to know that Jesus saw us individually and atoned for us? By the witness of the Holy Ghost. Then, we, “his seed,” having received this witness, become the ones whose feet carry the testimony throughout the world.

The Beautiful Ones are the Lord’s “Seed”

Building toward the answer concerning the beautiful ones, Abinadi continued, “And who shall be his seed?” Then responding to his own question,

Behold I say unto you, that whosoever has heard the words of the prophets, yea, all the holy prophets who have prophesied concerning the coming of the Lord-I say unto you, that all those who have hearkened unto their words, and believed that the Lord would redeem his people, and have looked forward to that day for a remission of their sins, I say unto you, that these are his seed, or they are the heirs of the kingdom of God. For these are they whose sins he has borne; these are they for whom he has died, to redeem them from their transgressions. And now, are they not his seed?[xiii]

And what do the beautiful ones do as prophetic testifiers?

Abinadi answered, “And these are they who have published peace, who have brought good tidings of good, who have published salvation; and said unto Zion: Thy God reigneth!”[xv] In other words, the seed of Christ-we, who to one degree or another are called “prophets” because of our testimony-are the beautiful ones who proclaim the peace of the Prince of Peace; we are the beautiful ones who bring to the world the good news of the gospel; we testify of the Author and Plan of Salvation; and we rejoice with all the pure in heart that the God of heaven lives, that he works among his children, and that he controls the affairs of nations.

In other words, they who received the testimony of Jesus and published the gospel message of peace in their day, they who are doing so now, and they who will do so in the future–they are the seed of Christ, prophets in their own right, and the beautiful ones in all ages. These are the true Zion people, the beautiful sons and daughters of Christ who will lift up their voices and sing together and see eye to eye when the Lord shall bring again Zion. These are the ones who will break forth into joy when the Lord heals and redeems Jerusalem, comforts his people, makes bare his holy arm in the eyes of all the nations, and they become the witnesses of all the ends of the earth beholding salvation of their God.[xvii]

We are those Zion people whose feet are beautiful upon the mountains!

Blessings for the Beautiful Ones

What are the blessings for the beautiful ones? President Charles W. Penrose of the First Presidency prophesied:

And the time will come when the Lord shall have established his Church perfectly upon the earth, and all things move in their proper course, that God will find a place adapted to every person, in which each will have more joy than in any other place and be able to do more good to the community than in any other. . . .

Now, my brethren, there are privileges and powers pertaining to these callings [of the priesthood]. . .we read that the Melchisedec priesthood contains greater powers. . . It not only holds the keys of the ministration of angels, but of communion with the heavenly Jerusalem, the general assembly and church of the first-born with Jesus Christ the Mediator of the new covenant and God the highest and holiest of all. And the time will come when under this priesthood to those who hold this authority and calling, and have the spirit of it and minister in that spirit and obtain the power thereof, the Lord will unveil his face and they shall gaze upon his glory. That time will come, for there is no word of the Lord revealed but what will come to pass.

. . . The time will come when the servants of the living God will purify themselves before him until they will be fit to receive these blessings.

When that holy temple is built in Zion, God will take away the veil from the eyes of his servants; and the day is yet to dawn when the sons of Moses and Aaron, having become sanctified to the renewing of their bodies, will administer in that holy house, and the veil will be taken away, and they will gaze upon the glories of that world now unseen, and upon the faces of beings now to them invisible; but it will be when they have purified themselves from the evils of this world, and are really the servants of the living God, and temples of the Holy Ghost.[xviii]

President Lorenzo Snow likewise prophesied that in the Lord‘s time “many of you will be living in Jackson County, and there you will be assisting in building the temple; and if you will not have seen the Lord Jesus at that time you may expect Him very soon, to see Him, to eat and drink with Him, to shake hands with Him and to invite Him to your houses as He was invited when He was here before. I am saying things to you now of which I know something of the truth of them.”[xix]

Certainly, Zion and its people are beautiful. Nephi gloried, “And blessed are they who shall seek to bring forth my Zion at that day, for they shall have the gift and the power of the Holy Ghost; and if they endure unto the end they shall be lifted up at the last day, and shall be saved in the everlasting kingdom of the Lamb; and whoso shall publish peace, yea, tidings of great joy, how beautiful upon the mountains shall they be.”[xx]

This article was adapted from the Pillars of Zion series: Click to receive a free copy of Portrait of a Zion Person