Janet Boynes grew up in the worst of circumstances in New York City to a mother who gave birth to several children by different male partners that never stayed. Boynes’ struggle is all too common: a young, fatherless girl looking for stability, belonging and love, ending up sexually abused, high and dealing cocaine, so lacking in self-worth that she retreated to the LGBTQ community to find acceptance.

At rock bottom after many failed personal relationships, Boynes’ struggle to turn her life around began. Her extraordinary journey answers many questions that young people, neighbors, friends and associates are asking about the same-sex issue. She provides compelling evidence that the human spirit can overcome any life-controlling issue, even in the face of the worst of odds.

Her presentation is affirming for anyone interested in, or concerned about, the trends to redefine Marriage. However, it is especially impactful for those who are confused about the gender identity or gay “marriage” discussion, those who believe that there is no choice or control over homosexual behavior, or those who deny any negative consequences to a society that redefines Marriage for same-sex couples at the expense of children who need both a mother and father.

“Janet Boynes’ autobiographical book, Called Out, is an inspiring story of the real possibility of change for those trapped by homosexual desires, ” said Tony Perkins, president of Family Research Council. “With blunt honesty, Janet tells the heart-wrenching story of the hardship and abuse she suffered early in life, which led her toward lesbian relationships. Her moving story is complemented by sound and compassionate advice to those struggling with homosexuality in their own lives, the lives of family members and in the church.”

Tickets for the “Janet Boynes: Called Out from Gay to Straight” event are $5.00 for general seating and $10.00 for priority seating, and may be purchased through the American Leadership Fund at www.AmericanLeadershipFund.com/store. 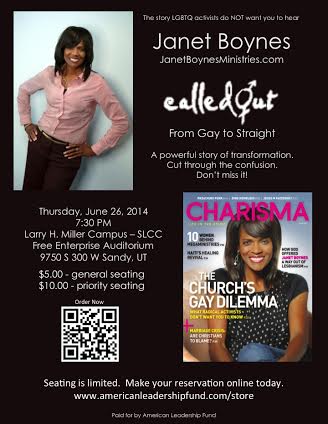 Hi Tiago, I hope this doesn't sound like I'm making light of your SSA--I only know from one friend (a gay convert who embraced the gospel view of heterosexual marriage, who now is marred and has two kids), who says that until he dies, he will be a gay man...he fully believes, as do I as this is the ONLY thing that make s sense to me, that his spirit is NOT gay, and therefore he is making his choices based on ETERNITY, and not this very short life...he believes that he will be able to find happiness here with his wife, and be fully free to love her in the eternities. I asked him if his daily life was a battle. Knowing that I had quit smoking and drinking to become active in the church, he asked me if my life had joy or if it was a constant battle for me. Not the same comparison, I know, but his point was valid. My choice to live the gospel standards became easier over time. Even now, years later, once in a while I see someone smoking or drinking a glass of wine, and I have a moment of missing the "good old days"...but then I remember all the great things I have in my new life, and eternity becomes that much more important than this temporary life...he agreed, and said it was a bit harder to turn around his sexual thoughts (he joked he'd never again be able to attend a Justin Timberlake concert), and everyday there's at least one impure thought he still chases away about some cute guy that walks past him on the street--to which I said I have the same darn problem, as I'm straight and married!! We all have issues and trials...some are harder than others. But we all must obey the same laws of God. I am grateful for people like you, and my friend who have the courage to choose eternity over the empty happiness of this temporary life. Good luck to you Tiago, and stay strong!

I agree with Kathy. I do wish that that Janet would be very precise about what she is talking about. If her message is that people who experience SSA have the opportunity to live faithfully within their values and don't need to accept the "gay" label, this is true and a positive message. If her message is that she personally has felt therapy has helped her decrease romantic attraction to the same sex and increase attraction to the opposite sex, that is a useful anecdote that may help some people. Of course, it would be unfair to assume that other people would always or must necessarily have the same experience. As a faithful, devoted member of the church who experiences SSA and has never broken the law of chastity, the most helpful realization for me has been to understand that I may experience SSA for the rest of my life and to develop faith, support, and coping tools to be able to live faithful while dealing with SSA rather than focusing my energy on the goal of developing attraction to the opposite sex, which for me personally does not seem likely.