Editor’s Note: This is an excerpt from an article on BYU Studies. To see the original post, click here. 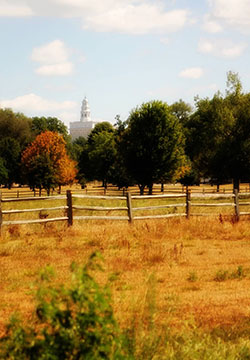 “On my way up the Mississippi”so begins many a travel narrative, sometimes with Nauvoo as a passing attraction on the itinerary, but just as often with the “City of the Mormons,” a reference much used in the press, as destination. Throughout its brief life, Nauvoo in its splendid setting on a great bend in the river, rising from the flats to a “city set upon a hill,” enjoying all that this phrase connotes in biblical and American history, drew instant admiration. Even the dour Rev. Henry Caswell exclaimed that the view of the winding Mississippi from temple hill was “truly grand.”

Ambiguities abound in the accounts about Nauvoo, particularly in descriptions of the Prophet, the city’s chief attraction. Visitors were not prepared for a populist prophet whose vernacular speech differed strikingly from the formal eloquence of his published revelations. To assess such a religious leader was difficult. He was minister and magistrate, storekeeper, innkeeper, and landlord, as well as a man who worked his farm, who wrestled with members of his congregation, who could take an assailant by the throat, and who could never eat, his wife said, without his friends. Memorable glimpses abound in the accounts of those who came to see and judge the Prophet for themselves.

One Sabbath in the winter of 18421843, Charlotte Haven attended a preaching at the Prophet’s house, having been given a ride in a large horse-sled with a little straw on the bottom and crowded with men and women “eager to hear their beloved leader.” “Such hurrying!” she wrote. “One would have thought it was the last opportunity to hear him.” The house was so full the windows were opened “for the benefit of those without who were as numerous as those within.” She found Joseph Smith “a large, stout man, youthful in his appearance, with light complexion and hair, and blue eyes set far back in the head, and expressing great shrewdness, or I should say, cunning. He has a large head and phrenologists would unhesitatingly pronounce it a bad one, for the organs situated in the back part are decidedly the most prominent. He is also very round-shouldered.” Charlotte expected to be “overwhelmed by his eloquence” but was disappointed in his “loud” and “coarse” discourse relating all the incidents of his journey from Springfield, where he had been on trial for one of the Missouri charges. Now, released on habeas corpus, he amused his audience and “excited them to laughter.” “He is evidently a great egotist and boaster,” Charlotte reported, “for he frequently remarked that at every place he stopped going to and from Springfield people crowded around him and expressed surprise that he was so ‘handsome and good looking.’ He also exclaimed at the close of almost every sentence, ‘That’s the idea!'”

Many prominent people visited Nauvoo and wrote about in their diaries, including W. Aiken from Ashton-under-Lyne, England, and Josiah Quincy from Boston, Massachusetts. They and many others describe the city, the people, and the Prophet in candid, opinionated detail.