Editor’s Note: The following article was originally published by The Heritage Foundation. To see the original article, click here. 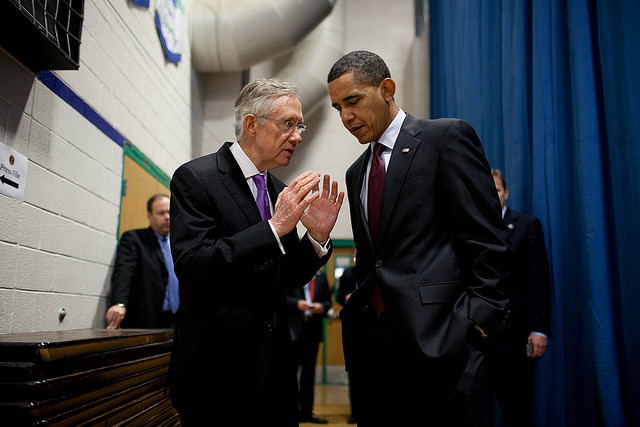 Senate Majority Leader Harry Reid, D-Nev., has promised the Senate will take up a proposed constitutional amendment this year that would radically alter the First Amendment.

The Senate resolution would allow Congress to limit fundraising and spending on election campaigns and independent political speech. Reid and others insist restricting the amount of money that may be raised and spent on political speech is not the same as limiting speech. That’s like saying that limiting the amount of newsprint a newspaper can buy does not limit its speech.

Having lost the battle at the Supreme Court, Reid and his cohorts are now pushing this constitutional amendment to reverse decisionsincluding Citizens United v. FEC and McCutcheon v. FECthat protect the rights of Americans to speak their minds about elected officials and candidates and to engage in the political process.

Shutting down conservative speech certainly appears to be a motivating factor behind this push to amend the First Amendment. Reid has given many interviews and speeches on the Senate floor demonizing the Charles and David Koch for “dumping unseemly amounts of money” into politics, “rigg[ing] the system” and “trying to buy the country.” Of course, he never mentions efforts by big Democratic contributors, such as George Soros and the SEIU. Imagine the audacity of those “un-American” and “shrewd businessmen” (Reid’s words) who would back candidates and causes they believe will make America better.

Champions of the proposed constitutional amendment claim it will “level the playing field” in elections. But that’s wrong for two reasons.

1) The amendment expressly exempts the press. The New York Times and MSNBC may continue to spend as much money, newsprint and airtime as they want to support their preferred candidates (or attack those they oppose), but the Kochs and other Americans would be severely restricted in their political activity and speech.

2) This proposed constitutional amendment would protect incumbent politicians. Allowing Congress to regulate the raising and spending of money in campaigns will tie the hands of candidates seeking to unseat them, which is already a long shot. Incumbents are able to amass war chests over the years. As Rick Manning of Americans for Limited Government has pointed out, even if a challenger “run[s] a flawless race,” the incumbent has “a dramatic advantage in issue knowledge, local media contacts and relationships.”

Tomorrow, the Senate Judiciary Committee will hold a hearing on this proposed constitutional amendment. It’s not easy to amend the Constitution (of more than 11,500 proposed amendments, only 27 have been ratified by the states), so S.J. Res. 19 is likely to end up as a talking point used to rile up the anti-Citizens United base in advance of the 2014 election.

Robert Bell was thinking very shallowly when he used Harry Reed's LDS church membership as something supportive to Reed's thoughts about making changes to our First Amendment. Such reasoning is just simply out of it.

To Robert Bell's comment: Mike Lee is also LDS, and I'm pretty sure he and Sen. Reed don't agree on much of anything. LDS doesnot mean one is always right (or left :)