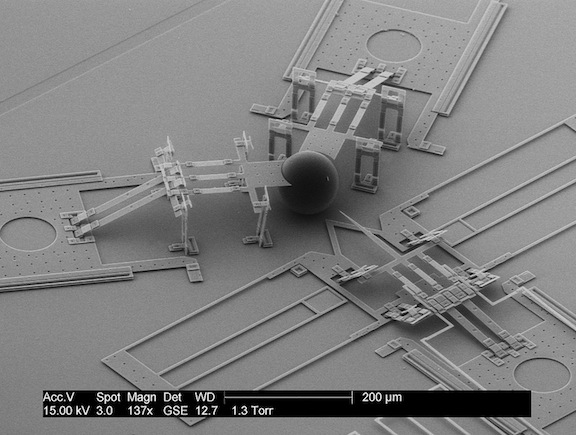 The ability to transfer a gene or DNA sequence from one animal into the genome of another plays a critical role in the medical research of diseases such as cancer, Alzheimer’s and diabetes.

But the traditional method of transferring genetic material into a new cell, microinjection, has a serious downside. This method uses a hollow needle to pump a DNA-filled liquid into an egg cell nucleus, but that extra fluid causes the cell to swell and die 40 percent of the time.

Now a multidisciplinary team of Brigham Young University scientists has developed a way to significantly reduce cell death when introducing DNA into egg cells. The researchers have created a microscopic lance that delivers DNA to the cells through electrical forces.

“Because DNA is naturally negatively charged, it is attracted to the outside of the lance using positive voltage,” said Brian Jensen, BYU professor of mechanical engineering. “Once we insert the lance into a cell, we simply reverse the polarity of the electrical force and the lance releases the DNA.”

Because the lance is 10 times smaller and no extra fluid is used, the cells undergo significantly less stress compared to microinjection, and thus, have a higher survival rate. The researchers describe their “metamorphic nanoinjection” process in an article published today by Review of Scientific Instruments.

Currently the BYU researchers, which include microbiology professor Sandra Burnett and mechanical engineering professor Larry Howell, are using the technique to inject DNA into mouse zygotes (single-cell embryos consisting of a fertilized egg).

“The microinjection technology hasn’t really changed over the last 40-50 years since it was invented,” Burnett said. “Not having to force liquid into the nuclei by shifting to a lance is a huge advantage. It not only increases the survival rate, but it also causes less damage for future development.”

In research published in Transgenic Research, the team found that 77.6% of nanoinjected mouse zygotes proceeded to the two-cell stage of development as compared to 54.7% for microinjected zygotes.

A major reason for creating transgenic animals is to research genetic or infectious diseases. By modifying the genes of a mouse to carry a human disease, researchers can generate data with insights into future treatments and therapies for those illnesses.

One of the BYU team’s most significant findings is that it’s possible to use the electrical forces to get DNA into the nucleus of a cell without aiming the lance into the pronucleus (the cellular structure containing the cell’s DNA). This may mean that injections can be performed in animals with cloudy or opaque embryos.

“Such animals, including many interesting larger ones like pigs, would be attractive for a variety of transgenic technologies,” Jensen said. “We believe nanoinjection may open new fields of discovery in these animals.”

Jensen said more efficient injections should also reduce the cost to create transgenic animals. Jensen’s research is funded in part by the $400,000 awarded to him in 2011 through a National Science Foundation CAREER Award.

Quentin Aten, a former PhD student at BYU now with Nexus Spine, LLC, served as the lead author on the research published in Review of Scientific Instruments.