Early in 1984, the day began as a normal commute to my job in the city of Brisbane, Australia. Four small children and multiple church callings left little time for reading, so I usually enjoyed the opportunity to catch up during the half hour bus ride. On this particular morning, seemingly at random, I picked up a six-year-old issue of the Ensign magazine to read.

The August 1978 issue had printed a letter in which BYU professor Ross Christensen referred to a medieval map of Yemen that showed an area called Nehhm, suggesting the possibility that this might be the Book of Mormon Nahom (1 Nephi 16:34), where Ishmael was buried during Lehi and Sariah’s journey across Arabia. Nephi’s wording made it clear that Nahom was already the name of the burial place and was not named by Lehi as was the case with the other stops they made.

Although I’d read this item years before, for some reason I now became intrigued. I kept returning to this little letter, wondering why it gripped me. Over several days the impression to pursue the matter remained insistent until I acted by contacting a new organization, the Foundation for Ancient Research and Mormon Studies (FARMS) in Utah. In those pre-internet days, FARMS was a grass-roots effort allowing scholars and researchers interested in the Book of Mormon to share information. I wrote them and, to my surprise, soon learned that no one had pursued Dr Christensen’s suggestions.

In retrospect, I can now see how my own curiosity meshed gradually, even cautiously, with the opportunity. The real beginnings of all this had come in 1973, soon after returning from my mission, when I found myself profoundly moved while watching a movie interpretation of the life of Christ, filmed entirely in Israel. It initiated a deep hunger to experience the Holy Land, its people and its culture for myself.

That appetite began to be satisfied in 1976 when my wife and our first child, six-month old Claire, flew with me to Israel. Unknown to us at the time, the previous day a suicide bomber arriving on the same flight had detonated his explosives inside the airport with deadly effect. Despite this jarring arrival, the ensuing days only served to cement my fascination with the paradoxes and beauty of the Middle East.

Now, an audacious thought began to emerge. I stood at the brink of a rare opportunity to use my meager travel experience in the Middle East, a few words of spoken Arabic and simple persistence to see what could be found. But to go to wild and dangerous Yemen made no sense; what could I do there but be a tourist? In any case, as a single-income family, we lacked the financial means. Added to all this was the fact that my wife was then seven months into her fifth pregnancy. But, since the fateful day when a letter advised that, in fact, no one had followed up on the professor’s suggestion, the promptings had been unrelenting. Six years had passed; I had to try.

Once that decision was made, a series of miracles began unfolding. For the first and only time in my life I was offered complimentary tickets on an inaugural air service to Cairo, thus making it financially possible. Egypt then served as a base to reach Yemen, only four hours flying time further. Once in Cairo, more minor miracles organizing visas and flights nudged us on, until after a week of preparations we were airborne over Saudi Arabia’s deserts. 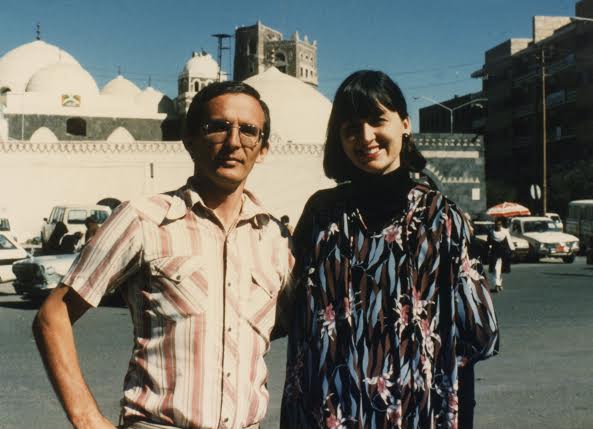 The author and his wife Michaela in Sana’a, Yemen.

Previous visits to Arab lands proved inadequate in preparing us for the sensory overload waiting in Yemen’s capital, Sana’a. With most buildings made of mud and a single paved street the city sat encased in a gigantic ball of dust. Primitive walls encircled the heart of the city next to streets overflowing with garbage and gutters of raw sewage. Wild-looking tribal warriors in traditional dress strode around carrying their rifles and with a curved dagger stuck prominently in their belt. Other Westerners seemed entirely absent.

After the morning’s call to prayer the city’s beggars, many hideously maimed, crawled into position. In the afternoon, everything – shops, businesses, markets – closed down for several hours as the men chewed the Qat leaf that forms the unofficial mainstay of the economy. Traffic that had been merely chaotic became maniacal as its mildly narcotic effects took hold. In an outlying village I encountered an unfortunate madman manacled naked to a post. Yemen, the poorest country in the Arab world, was frozen in a medieval past, almost untouched by the world outside. 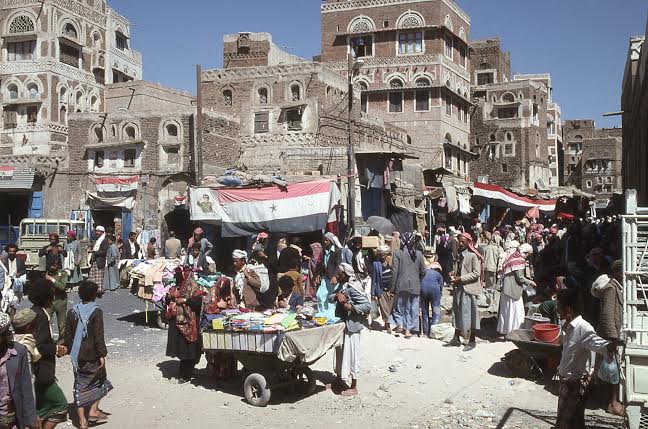 The walled city of Sana’a.

I grew to love Yemen and its proud but unfailingly hospitable people. Geography had isolated Yemen and left it untouched – but this was actually encouraging for a novice Book of Mormon researcher. Preserved in the dry desert climate, the past lay all around, even from that remote period before waves of the three Abrahamic religions – Judaism, then Christianity and finally Islam – rolled across southern Arabia. The Queen of Sheba, Bilqis, emerged here to make her mark in both Old and New Testaments. No one, however, seemed to know anything about “Nehhm” or know who might. Just leaving the city required government permits and we were politely, but firmly, told that many areas we hoped to see were off-limits.

Fortuitously, however, that same week a new National Museum opened in Sana’a. In the confusion of opening day I was able to retain my camera and discreetly photograph several small, inscribed brass plates dating to around AD 400-500. This was encouraging for we knew that LDS scholars would be interested in another example of early metal records. However, our real interest lay in a single word on an obscure map printed more than two centuries earlier. Success remained elusive until our last full day in the country.

<hr class=’system-pagebreak’ />0001pt; line-height: normal; text-align: left;”>The day before flying out I finally located a more recent map showing Nehem, a region roughly 25 miles northeast of Sana’a – the same location as the early map had shown Nehhm. This told us the name had survived since at least that time. It was a small beginning, but it was enough to propel me into a years-long search. Lacking funding and without graduate students to do the leg-work, I found myself spending untold hours in libraries, museums and Bedouin tents tracking down the threads of a distant past.  Over the years that followed I returned to Yemen several times and expanded my search.

It was often a lonely obsession but it was never an unrewarding one. As I continued following those insistent impressions, over time I located more than 20 obscure texts and maps from musty books and little-known early writings that referred to Nehem. They convincingly traced the place name back, always in the same location, for almost two millennia. It emerged that Nehem was actually a traditional tribal area, named after one of the oldest and most prominent tribes of Yemen. Eventually I was able to access the tribal area and speak with tribal leaders. 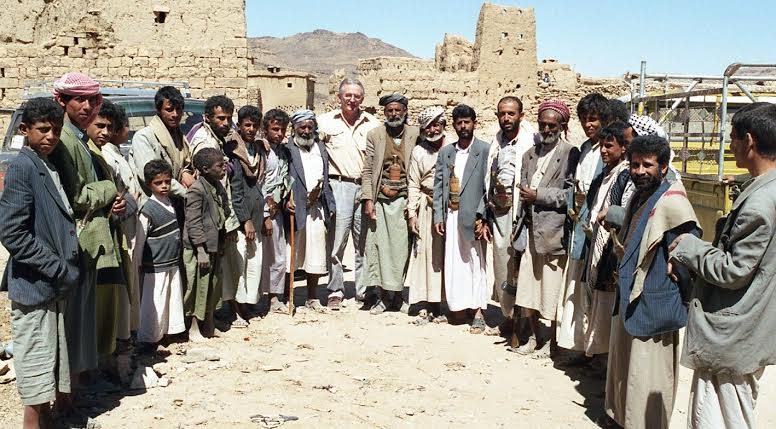 The author with members of the Nihm tribe at the ruins of the former tribal capital, Mehle.

Most impressively, the actual meaning of the name in all the Semitic languages was found to have multiple links to the context of Nephi’s account: Nahom refers to mourning, sorrow and hunger, a fact making Nephi’s words all the more striking:

Coupled with the fact that the name did not exist anywhere else in Arabia, there was soon no doubt that the modern day tribal area was the same place Nephi had referred to. Evidences kept multiplying as I dug deeper. It became clear that the name was so appropriate for a place of burial and mourning that there was no need for Lehi to give it another. And it was surely not just a coincidence to find that the largest burial area in mainland Arabia was located just a short distance away, a place not revealed to the outside world until more than a century after the Book of Mormon was published to the world. Eventually this special and unique name was documented to within about six centuries of Nephi’s reference to the place.

Had the story ended there it was still a huge step forward in understanding this aspect of Lehi and Sariah‘s journey, for now we knew that the place Nephi recorded in his account actually existed. It anchored Nephi‘s account in the real world. In turn, its location had significant implications for understanding the remainder of their trek. However, behind the scenes, another scenario altogether was unfolding.

I came back today for the "to be continued" part, but alas! It is not here.When will we get the rest of the story?

On pins and needels waiting for the next installment to be published! Please hurry.......