We just celebrated our country’s great presidents. February 12, was Abraham Lincoln’s birthday and February 22 was George Washington’s birthday anniversary. In honor of these two great presidents, I’ve gathered some outstanding books about several of our presidents throughout the years. All of these are picture books except for James L. Swanson’s book about the Kennedy assassination which is geared for ages 12 through adult. 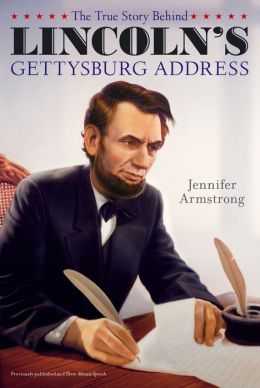 The True Story Behind Lincoln’s Gettysburg Address, by Jennifer Armstrong, and with illustrations sprinkled throughout by Albert Lorenz, is an excellent historical book for kids, ages 7 to 9, to learn about one of the most famous speeches in American history.  This smallish sized book (with 87 pages) gives many interesting facts leading up to Lincoln’s speech. The information about the Civil War as a backdrop to his speech helps youngsters understand America’s turmoil and the devastation that affected its citizens. But, moreover, the traumatic affect the war had on our sixteenth president and how important it was to Lincoln to begin America’s healing process. The outstanding drawings, as well as the larger font, help make this book exceptional. The last two pages show photographs of Lincoln and actual locations important in his life.

I Am Abraham Lincoln, by Brad Meltzer, and illustrated by Christopher Eliopoulos, not only teaches children, ages 4 through 8, about President Lincoln, and his accomplishments with slavery and his famous speech, but many other attributes that made him a hero. The book shows him as a child growing up where he loved reading and writing. He also believed in being fair and honest and in treating others with respect. By showing him as a child growing up and into the presidency, it shows kids what Lincoln’s values were. Meltzer has two other books in his new series, “Ordinary People Change the World” about Amelia Earhart and Rosa Parks. 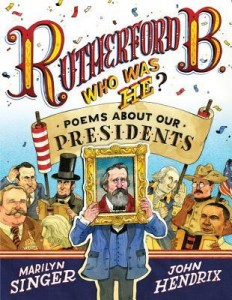 Rutherford B. Who Was He? Poems About Our Presidents, by Marilyn Singer, and brightly painted by John Hendrix, is a collection of poetry, geared for ages 6 through 13, that highlights each of our U. S. presidents. Singer is a favorite poet of mine for children.  She is able to make poems relevant, teachable and interesting, and at the same time enjoyable for youngsters. Each poem brings out one or more interesting presidential facts. Be sure to check out the brief biographies about each president found at the back of the book as well as the back end-pages displaying a timeline.

The President Has Been Shot! The Assassination of John F. Kennedy, by James L. Swanson (who wrote one of my favorite historical books: “Chasing Lincoln’s Killer”) is a book geared for teens and adults that is full of photos of important locations and President Kennedy, and actual articles having to do with the shooting.  This historically accurate account of this horrible event reads like a story and leads up to the assassination with information about Oswald as well as unfounded conspiracy theories. This is a well-documented book as you will see in the extensive research found in the back of the book.  This is the kind of book you want your older kids to read to discover how interesting history can be! 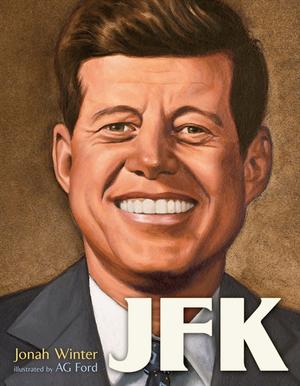 JFK, by Johah Winter, and beautifully illustrated by A. G. Ford, begins with President Kennedy’s fateful drive in Dallas, Texas. But in the next few pages, the story takes you back to when Kennedy was a child growing up in a large family, enjoying sports and life. The summary of his life makes this picture book a quick study of an important president in our history.  The full-page painting of his face on the cover is dead-on!

To Dare Mighty Things: The Life of Theodore Roosevelt, by Doreen Rappaport, and beautifully painted by C. F. Payne, showcases a man known as “the man with a plan” and the “rough rider”.  Through his early years he loved reading and discovering places and adventures he wanted to become a part of.  However, as a child he was very ill, which is when he turned to books while becoming bedridden. It was during this time that he learned many important facts before growing up and becoming president in 1904.  The challenges he faced, and his experiences in both public and private life, are the focus of this well-documented picture book. There is also a time-line of important events in his life found in the back of the book. But, what makes this bookstand out are the pictures that are so perfectly and beautifully painted, especially the full-page painting of the president’s portrait on the cover. 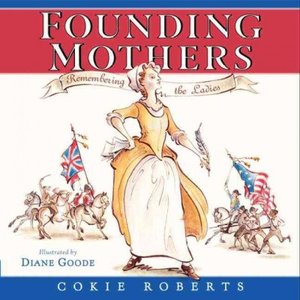 Founding Mothers, by Cokie Roberts, and wonderfully illustrated by Diane Goode, takes a profound look into the women in America who helped shape our country and make it what it is today.  There are interesting facts about Martha Washington and how important she was to her husband and the soldiers who served with him.  There’s Deborah Franklin, who ran the first U. S. postal service while her husband was out of the country. There are little known women, as well as the famous, in this deeply researched book. Be sure to check out the front and back end-pages that give more insight into the woman of colonial days.

As a writer who is always reading and listening to children's literature, I always appreciate new ideas. Thanks for sharing these.