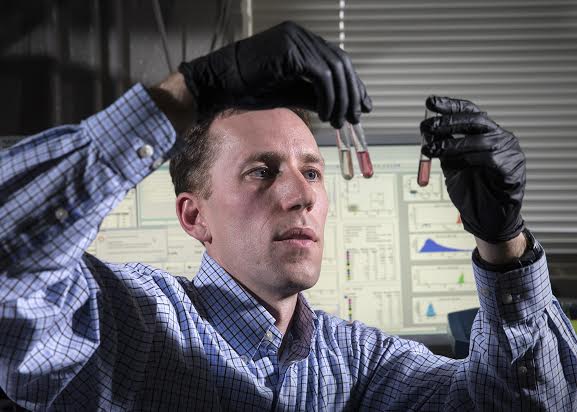 BYU professor of microbiology and molecular biology, Scott Weber, works in the lab.

When people get sick, their body’s immune system launches a counter attack to protect the body. An important part of succeeding in that battle involves the work of helper T-cells.

Scientists know that some of those helper T-cells are more effective than others and new research coauthored by a BYU microbiologist appearing in Nature Immunology has found out why: Some helper T-cells do better in school.

“The early education that helper T-cells get has a surprising effect on how successful they’ll be in protecting the body,” said Scott Weber, BYU professor of Microbiology and Molecular biology. “With this work we’ve discovered new insights into how a T-cell is educated.”

The study is published in a top-tier journal in the field of immunology and could ultimately have significant impact on the development of vaccines. This research joins other studies taking place at BYU that are helping improve treatment and diagnosis in the fields of cancer,Alzheimer’s and other diseases.

BYU’s commitment to making significant advances in science research is as strong as ever, as evidenced by the new 265,000-square-foot Life Sciences Building set to open this year. Weber and his fellow biologists will move into the building this summer and take advantage of the state-of-the-art labs in their continued pursuits of high-profile scientific discovery, and in Weber’s case, improving immunity to infection.

“If we can understand how to improve T-cell function, we can design vaccines for specific infectious agents that provide better helper T-cell stimulation,” said Weber, who earned his Ph.D. from the University of Illinois. “This would help, particularly in young people, improve T-cells so that they function better long term.”

The “early education” of T-cells Weber mentioned is a two-part process the immune-system cells experience in the thymus (a small organ above the heart) before they are released: First, in order to function properly they must be able to recognize and bind to small proteins presented by thymic cells.  Second, they must not bind too strongly to the proteins presented by these thymic cells to prevent autoimmunity.

Past research has understood this process as a pass/fail exam: accomplish both or the T-cell dies. But Weber and his team have found some T-cells are getting better grades during this education process than others, and thus, are performing their jobs better.

“What was once considered a process only important in determining if a T-cell survives or not is much more important. These interactions a T-cell has in the thymus are actually determining how well they respond to infection later in development,” Weber said. “The early interactions in the thymus are deciding the T-cells’ fate; they’re deciding the type of T-cells they’ll become and how well they will protect the body from infection.”

To determine this, Weber and his team looked at how two specific lines of T-cells in mice responded to the introduction of a virulent food-borne pathogen. Their study found that when T-cells are deprived of these early interactions with self-peptide their response to infection was negatively affected.

Even more surprisingly, the researchers found that the T-cells didn’t need to interact with a foreign pathogen to exhibit their differences. The cells showed intrinsic differences before coming into contact with bacteria.

“If they received a good education, even before they saw a pathogen, there was something inherently different about them,” Weber said. “It’s really all about the value of education and its ability to cause long term change.”

The topic not addressed was how pregnant women with HIV infection might be able to protect their unborn children from infection. If Weber's research leads to educating T-cells in this situation, much of Africa could be saved from the plague of AIDS.

Thank you for sharing this in a way that I can understand the most important aspects of the discovery!