The Noncanonical Sayings of Jesus 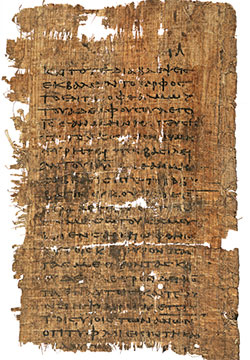 Of the hundreds of sayings attributed to the mortal Jesus but not found in the New Testament, relatively few that may be genuine offer fresh insight. None are authenticated with certainty.

The Greek noun agraphon or agrapha in the plural means “something unwritten.” in the field of biblical studies, this term denotes sayings or quotations attributed anciently to the mortal Jesus1 but not found in the four canonical Gospels (Matthew, Mark, Luke and John). In 1889 a German scholar named Alfred Resch drew together and classified, from patristic authors, variant readings of New Testament manuscripts, apocryphal books, and elsewhere literally hundreds of sayings or variations on those sayings attributed to Jesus of Nazareth but not found in the New Testament Gospels.

Until that time, almost no one had been aware of the large number of such noncanonical sayings that had been preserved, and most had subscribed in one degree or another to the principle of non in thora, non in mundo, that is, if it is not contained in the canonical Gospels, Jesus did not say it. The theory behind modern study of the agrapha is that in the first century there were oral traditions about Jesus and his teachings out of which the New Testament Gospels were distilled but all of those traditions surely could not have been included in those Gospels. Could not the eyewitnesses who informed Luke of his facts also have remembered other incidents and teachings from their time with Jesus? As long as the original disciples of Jesus lived, their fresh reminiscences about him would have continued adding to the body of oral tradition circulating in the early Church, thereby increasing the possibility of genuine extracanonical sayings.

Since the discovery of the Nag Hammadi codices in 1945, scholars have determined that all these sayings come from a Greek version of the Gospel of Thomas that was similar but not identical to the Coptic version in the Nag Hammadi library. Since the work of Grenfell and Hunt, other material has come to light that has added to the collection of sayings attributed to the mortal Jesus and that adds also to the likelihood that at least some of the agrapha might be genuine. The Coptic Gospel of Thomas alone contributes 114 sayings. Since it is an article of faith among the Latter-day Saints that the canonical text of the New Testament is neither entirely complete nor entirely correct, it is understandable that there should be some interest among us in these extracanonical sayings.

So, is it possible then that genuine sayings of Jesus circulated anciently that were not preserved in the canonical Gospels? This is not only possible, it is veritably certain, for the prime examples of such materials can be found in the New Testament itself, though not in the Gospels. In Acts 20:35, Luke records how the Apostle Paul encouraged the elders of Ephesus “to remember the words of the Lord Jesus, how he said, It is more blessed to give than to receive.” Since this statement of Jesus is not found in the four Gospels and since we have no reason to doubt either Paul or Luke, the last line in Acts 20:35 must be accepted as a genuine agraphon. Further, Paul’s exhortation that the elders “remember” these words of Jesus indicates that they were known to the elders and, therefore, that they circulated in the primitive Church independently of the written text of the four Gospels. Thus Acts 20:35 contains an example of a genuine saying of Jesus that was widely known in the early Church but that would not have been preserved had Paul not quoted it nor Luke remembered that he had done so.

Yet not all that glitters is gold, and while the possibility of genuine agrapha on the model of Acts 20:35 and 1 Thessalonians 4:15 must be granted, most of the agrapha collected by Resch and Ropes or discovered since then are almost certainly not genuine. Particularly among the apocryphal gospels do we find recorded supposed sayings of Jesus that clearly serve the theological interests of a later time.

To read the full article on BYU Studies, click here.