Standing for Marriage in Utah: A Very Personal Night 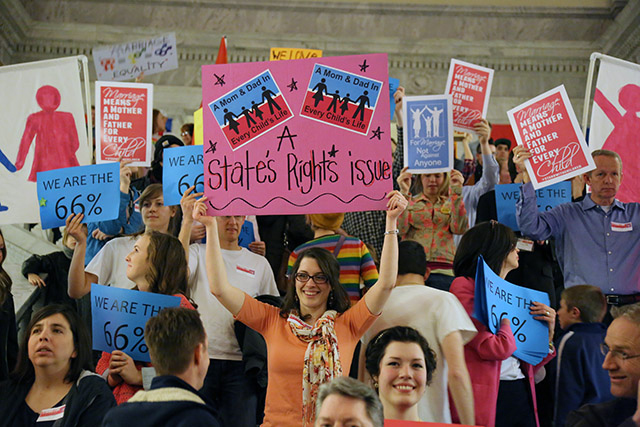 I wasn’t sure I was in the right place. Oh, for sure I knew where Utah’s capitol building was, I just really didn’t know if I should be there. The whole evening presented a real dilemma for me. Don’t be concerned about my convictions; I have no question that supporting traditional marriage and the right for every child to have a mother and a father, of course, is the right thing. It’s just that my own daughter had been in labor all day and I knew that any minute our newest granddaughter would arrive. My heart was so torn. Texting can only slightly assuage the pain of not being there at the arrival of a new little one from the pre-mortal world. 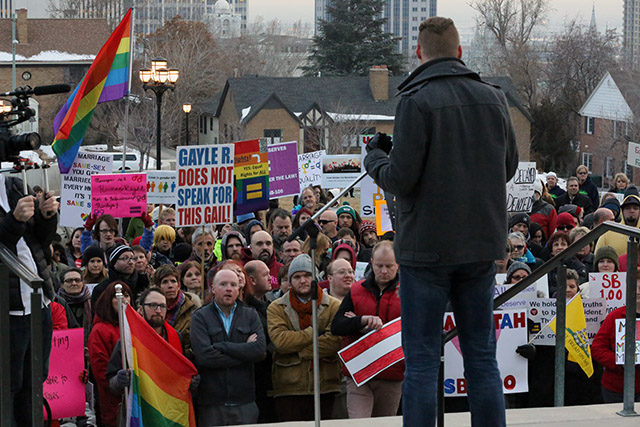 I arrived at 4:58 pm knowing that the opposition was to gather on the south steps to say what they had to say against traditional marriage. My heart was so tender. I guess it’s because our little one was so close and she was soon to arrive in a world with shouting voices-voices that opposed the very institution that was welcoming her into this world. I felt a lump growing in my throat as I listened to the cries of people who sincerely feel they have the right to redefine the institution of marriage between a man and a woman. I felt so sorry for them and felt a wave of love for their pain at the same time. 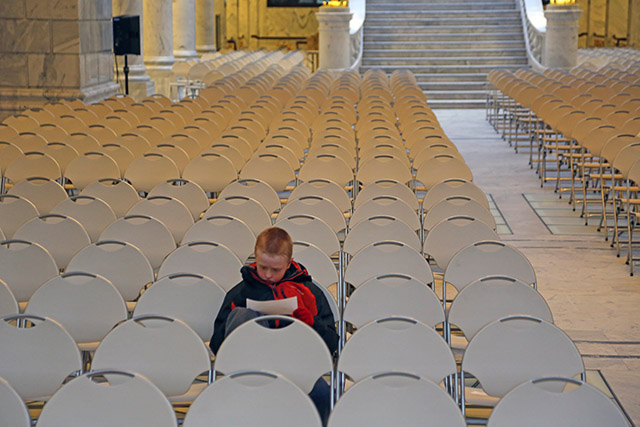 I walked into the capitol and saw quite a scene. There were 800 chairs set up and all of them empty except one. In that seat was a young boy who had come with his family to stand for marriage. He was reading the paper that was on his chair reminding all to act with civility and respect for one another. Again, it was a tender scene. It was now 5:30 pm and all I could think about was my daughter Rachel in labor at the hospital. 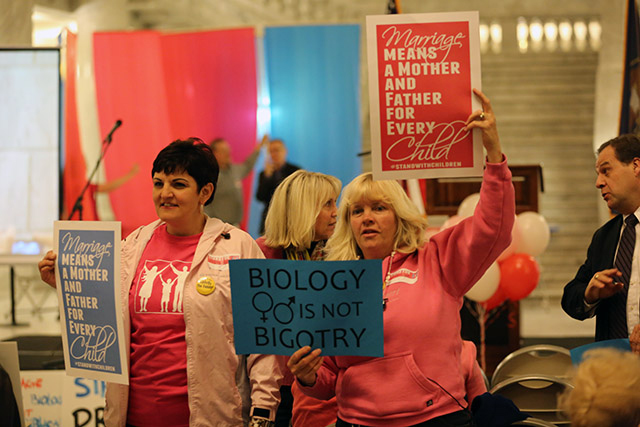 At this point I wondered if people would show up. Will the citizens of Utah stop being so silent on this most critical issue of our times? I think we have a tendency as members of The Church of Jesus Christ to be nice, respectful and courteous to all around us, even when marriage is on the line. Civility is certainly a key, but it is not practiced, for the most part, on the side of the opposition. 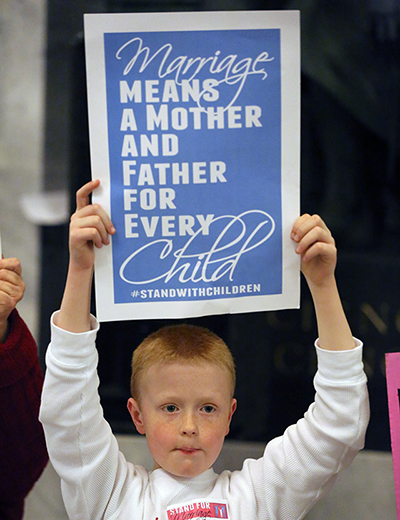 This reminded me of being a student at BYU in the 70’s and going to my first football game. I had been raised in Missouri where we went to the Mizzou football games (University of Missouri at Columbia) and they were LOUD. I jumped to my feet at Cougar Stadium those first few plays and started yelling with enthusiasm and support for my team. People turned around and gave me “the look” like I was out of line to be so boisterous. I soon learned to reverently clap if the Cougs made a first down and rise and shout when others stood first. I don’t think we can afford to be so reserved on the issue that is before us now. 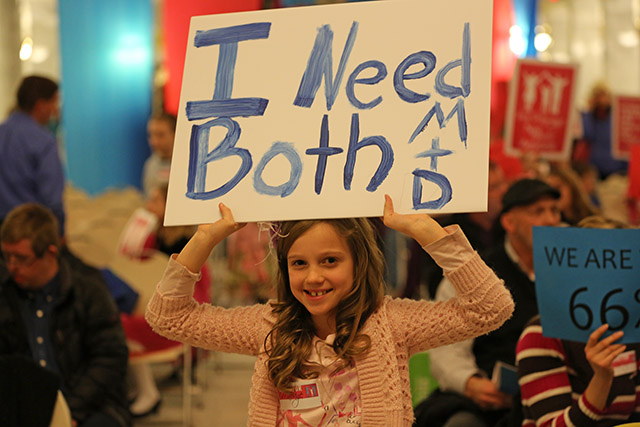 A little girl caught my attention with a sign that said she needed both her parents. My mind went to the hospital. Oh, how this little girl that was coming to our family needs her Mommy and her Daddy! I know this is the “Gold Standard” having this intact, traditional family of a father and a mother, but it is truly what we have to strive for to save our civilization. 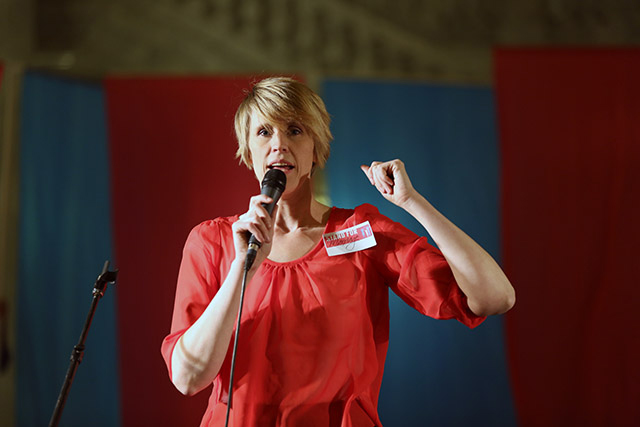 Mary Summerhays stood up to give everyone some guidelines. “This is a free speech gathering and everyone can have their say but we ask that you be respectful of each other.” We have come to know Mary as a woman of great drive and passion, a woman who is not unlike Captain Moroni of old who raised the Title of Liberty in his day. 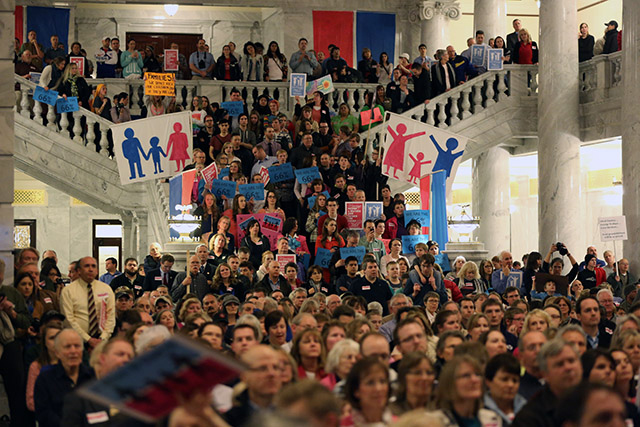 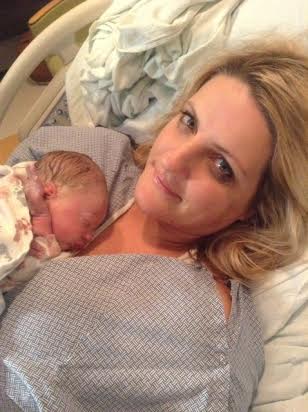 Minutes before the event started I got the text I was waiting for. Rachel had given birth to a healthy girl, Taya Maurine Tomsick, 6 lbs. 6 ounces, 19 inches long, healthy and strong and beautiful. Her husband, Jeremy, sent me the picture of mother and daughter. I welled up with tears. Taya was born at 6:49 pm. Before the event officially started at 7:00 pm, I took my phone to Mary and other organizers (all who knew why Maurine wasn’t there with me) and said, “This is what it’s all about,” holding the picture up that had just come through. I could hardly contain my emotions for joy that was overflowing at this point. 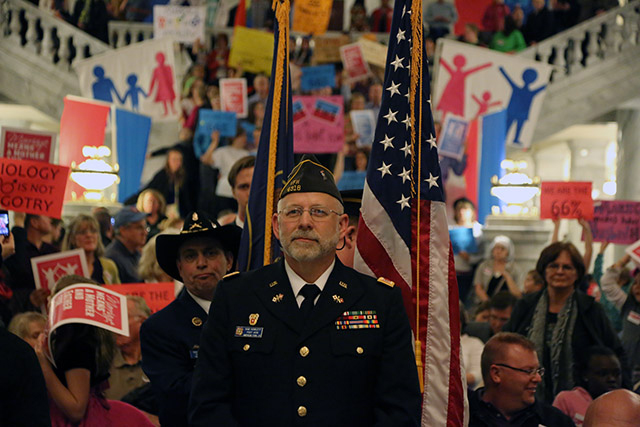 The VFW men carried the flag through the midst of the-now-very-swollen audience. They were men of honor and patriotism. The entire audience stood to honor our nation’s flag and to recite the pledge of allegiance. We sang the national anthem together and had a prayer. What an appropriate way to start a rally to stand for marriage. 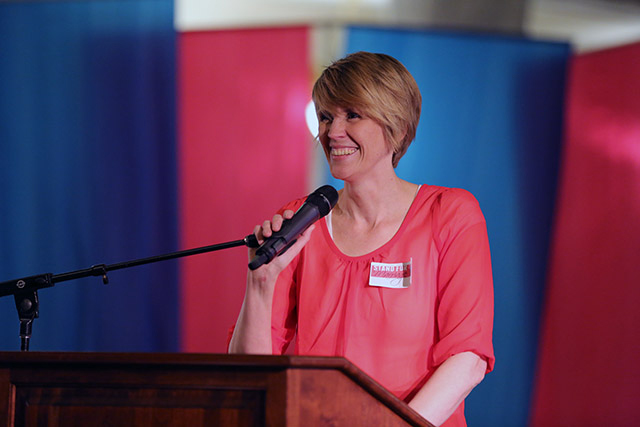 Mary Summerhays opened the event reminding us that every speaker this night “will affirm to us that marriage means a mother and a father for every child,” and that “we can show the world that Utah can be for marriage without being against anyone.” Radio talk show host Rod Arquette was emcee for the evening and did a marvelous job. 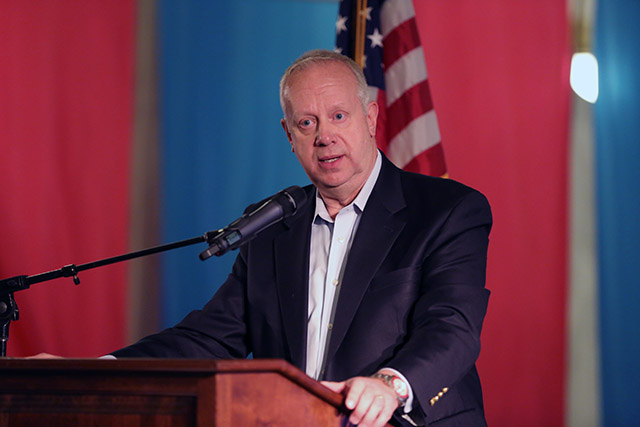 Rod praised the large audience by saying: “You are the silent majority and you have said to yourself , enough is enough and I will lend my voice and my presence to stand up for what we believe in,’ and that is traditional marriage.” 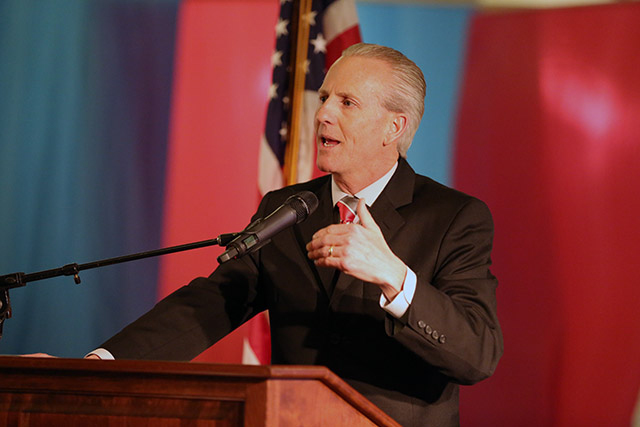 Wayne L. Niederhauser, President of the Utah State Senate , emphatically said, “We have a jurisdictional issue here. For over 100 years as a state and for over 200 years plus as a country the jurisdiction to decide marriage issues has been in the state.  In 2004 the people of this state spoke out and we enacted Amendment 3. And I support the voice of the people.”

With each speaker the crowd became more and more excited and passionate.

This was a group of like-minded people who were not afraid to say plainly and openly that they stood for marriage between one man and one woman as the only legal marriage in the State of Utah. 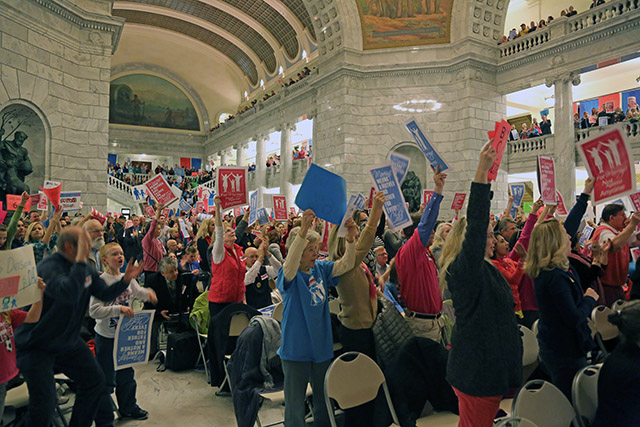 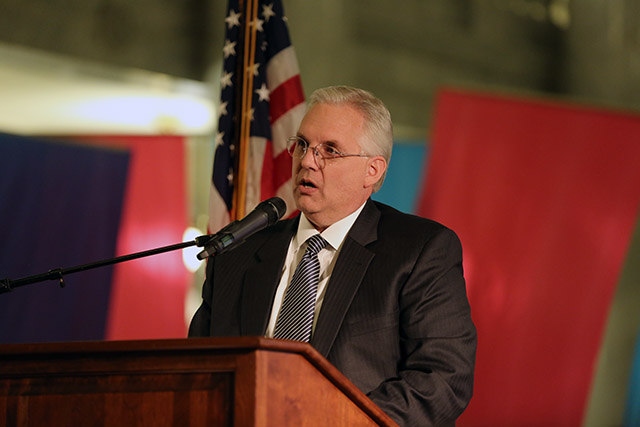 Stuart C. Reed of the Utah State Senate, and the most outspoken on this topic in Utah’s leadership said, “With malice towards none and charity for all I join you here tonight to be on the record declaring my unequivocal support for traditional marriage-marriage solely between one man and one woman; the only marriage that should be allowed in Utah. I make this declaration before it becomes a hate crime to do so.”

He continued: “We should not be cowered by advocacy groups, sympathy groups or government officials for speaking up for what is morally right. Although I’ve been advised not to, I profess unabashedly that it is a moral imperative that government officials support traditional marriage as the only acceptable form of marriage-the only marriage that can preserve the family as a foundational unit of society and the only marriage that is morally right for Utah.”

And he offered a passionate invitation to all in the audience: “Each and every one of you is needed to help protect Utah from the gathering storm sweeping over this nation.” 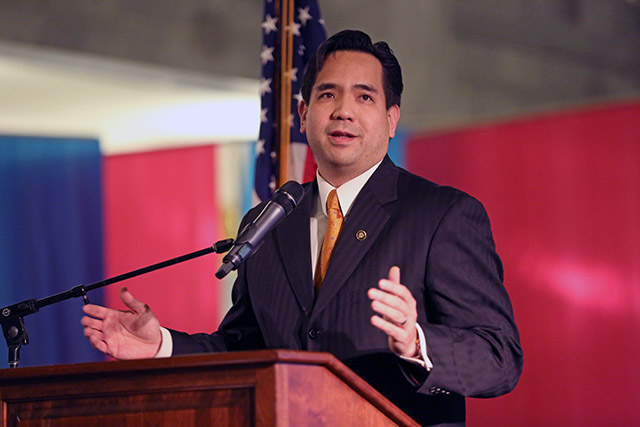 Utah’s recently appointed Attorney General, Sean D. Reyes thanked everyone for coming and felt supported in his office to defend Utah’s Constitution. He made it clear that “In striking down Amendment 3 and other laws in the State of Utah the District Court exercised the most invasive type of intrusion on our State.” The costs to defend this will be great, but he emphasized that they have gathered a dream team to defend Utah: Gene Schaerr as Team Lead with John Bursch and Monte Stewart assisting. Normally such a defense would cost no less than $2,000,000. General Reyes says the team has agreed to cap their cost at $300,000. 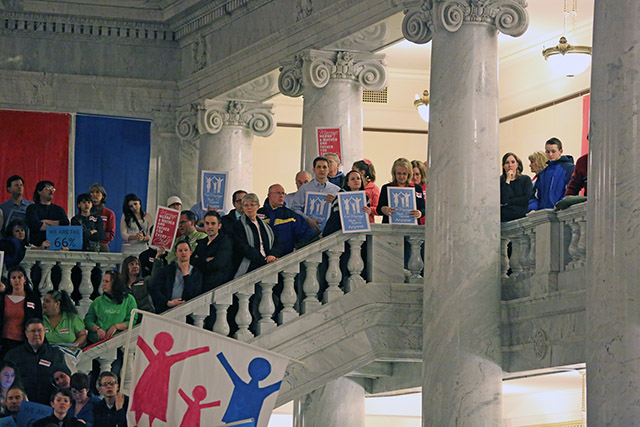 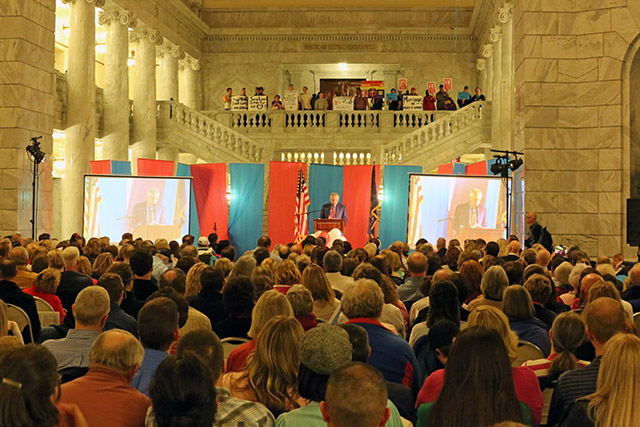 Soon after the Attorney General’s talk I felt like I could not stay any longer-I had to get to my own family and celebrate the arrival of our new granddaughter. Many of our own family was there in the capitol building. Many of our friends were there. I took a few more pictures and then headed quickly south to the hospital. 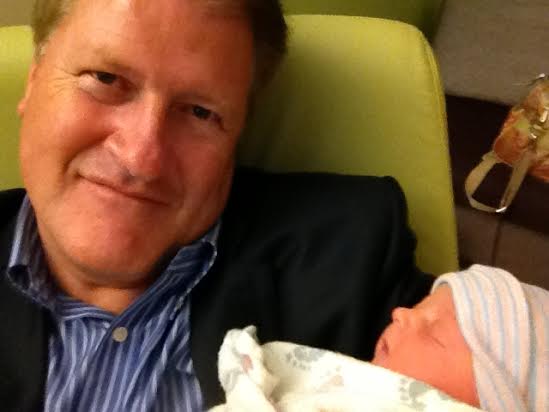 As I held our new little granddaughter, not quite three hours old, I thought about all those signs that were held high by the supporters of traditional marriage at the rally that night: “Marriage means a mother and father for every child.”

Thank you for this touching piece. I wish I could have been there. Please don't give up fighting for what is right as defined by God.

May God bless all of those brave enough to speak the truth boldly, but with love, especially when it is not "politically correct." As one who fought this same battle in California, it was so disheartening to have the voice of the people overturned. We must continue to declare that God instituted the holy order of marriage between a man and a woman. And we must preserve State's rights, as well.