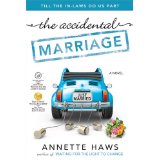 That first year of marriage can be tricky. In The Accidental Marriage, Annette Haws throws together two young people from different backgrounds who jump into marriage without really knowing much about each other or the other’s goals in life. Toss in Elliot’s domineering mother and Nina’s manipulative father and there are in-law problems before the ink has time to dry on their marriage certificate. And just for good measure, add a large dose of 1970s style feminism, and there’s bound to be trouble.

Elliott is serving an LDS mission in Scotland when he meets whimsical Nina, who is doing a semester abroad. There’s an instant attraction between the two and Nina gives Elliott a sprig of mistletoe, a kind of rain check, should they meet each other again after they each return to their regular life. He sends a Dear John letter to Pam, the girl who has been waiting back home, and Nina’s father, who doesn’t know about Elliott, demands she return home before she gets more involved with the Irish poet she has been dating.

The homecoming is a disaster with tons of relatives who push Pam into Elliott’s arms while Nina looks on from a short distance away. The courtship is brief and long distance with Nina in Salt Lake and Elliott in a small northern Utah college town and consists of mostly awkward weekends with their parents trying to end the relationship. Nina’s father resorts to bribery and Elliott’s mother insults Nina and pushes Pam at him. The more their families push the more the young couple stubbornly insist on getting married right away. Each is sure they can overcome the differences in their backgrounds. He comes from a large family, living in a tiny house, with a father who runs a small town feed store and mostly goes his quiet way, letting his domineering wife make all of the decisions. Nina comes from a wealthy family of lawyers, has always been their pampered princess, and they are adamant that she should become the first female addition to their prestigious law firm.

Marriage proves challenging. Elliott works part time and goes to school; he also can’t give up being his mother’s confidant, his younger siblings’ idol, and his belief that his wife should cook and clean, leaving him free to study even though she’s working full time to pay the bills. Nina takes a job teaching at a junior high that could double as “the old boys’ club.” One male teacher harasses her relentlessly. Every Sunday her mother-in-law insists she and Elliott go to church with them and have dinner at her house. The young wife knows nothing about cooking, cleaning, or doing laundry and Elliott’s mother insists on teaching her in the most belittling way possible. The young couple have little time or privacy together. Nina drifts into confiding her problems to an old friend instead of Elliott and he shares everything with his mother while discounting his wife’s concerns.

It’s easy for the reader to point out dozens of ways Nina and Elliott messed up both in their courtship and their marriage. It’s not hard to thoroughly dislike their controlling parents who instead of helping them, do everything possible to break them up. Though they grew up with different attitudes toward the Church, they both claim to be believers and that the Church is important to them, but they don’t pray, attend their own ward, go to the temple, or read the scriptures. He grew up with his mother deciding what was doctrine and requiring each family member to follow her dictates and Nina grew up with a casual, relaxed, whatever is easiest attitude toward living the Gospel.

Without ever discussing their differing viewpoints, he gives orders and she resents this, but nothing gets resolved. He becomes more like his mother and Nina increasingly embraces extreme feminism. They treat each other the way their parents treat them. The question soon becomes would this couple be better off ending their marriage, which possibly shouldn’t have happened at all, than staying together.

The main characters are a mixed bag of strong, positive qualities and annoying negative ones. They’re well developed, complicated, and both their growth and their backsliding make them realistic and give a character driven element to the story. The secondary characters are only developed enough to highlight their impact on the main characters. Though this is a story of one couple’s courtship and marriage, I wouldn’t call it a Romance. Because the elements of establishing a union separate from that of their parents, responsibilities within marriage, women’s rights, and communication play a stronger role than falling in love, I’d classify this book as general fiction or even women’s fiction. The story ends on a hopeful note, but little evidence is given that the characters will actually carry through with their good intentions.

The story doesn’t move as much toward an end as it does toward exposure of inequities, an examination of the role upbringing brings to marriage and adult choices, and the unwitting damage brought about by selfish self-interest and pride. I’d recommend this book to those contemplating marriage, newlyweds, and the parents of young adults. It carries a strong message and is entertaining for almost everyone.

Annette Haws and her husband are the parents of four children. They live in Utah and this is her second novel. She won Best of State, Whitney Award for Best Fiction, and the League of Utah Writers award for best published fiction for Waiting for the Light to Change. The Accidental Marriage, Till in the in-laws Do Us Part is set for release early in December.