Picture books can inform, excite and help youngsters understand the world around them. There are also picture books that can help children communicate, as well as extend their imaginations. I’ve compiled some outstanding new picture books that are generally wordless. These types of books are perfect to help youngsters verbalize what they see in the pictures and then imagine or predict what events might take place before turning to the next page. 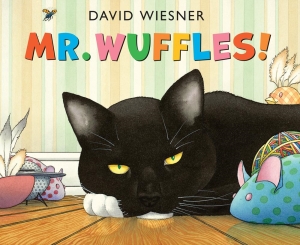 Mr. Wuffles, is by David Wiesner, a three-time Caldecott winner (and this book could become his fourth)! The book begins with the only words found as the owner of Mr. Wuffles (the pet cat) asks what toy his cat would like to play with. It’s very evident that Mr. Wuffles isn’t interested in any toys until he passes a new toy on the floor. It’s actuality a small alien space ship and you see the tiny green aliens inside. They appear worried as Mr. Wuffles begins to play and swat the ship around. They escape into a hole beneath the walled radiator and begin making plans of how to repair their ship and get out of this house. With the help of some ants and a ladybug, they eventually escape and the look of Mr. Wuffles as they fly out of the window is worth a thousand words! This is definitely one of my favorite picture books of the year!

Bluebird, by Bob Staake, reminds me of the famous French short movie, “The Red Balloon”. It has a similar path of circumstances that happen to a young boy, only in this story it has to do with a small bluebird. The bird notices that the boy seems sad and lonely in school and is even bullied by his peers. The bird becomes his friend and they enjoy one another until the classmates notice the bird and try to destroy it. There are many levels in this story for adults and youngsters to discuss including empathy, concern, friendship, hope – and life and death. 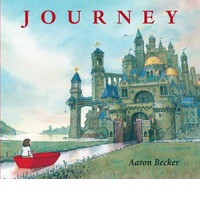 Journey, by Aaron Becker, is a wondrous story rich in imagination. A young girl discovers a magic crayon that whatever she draws, the drawing turns into reality. So she draws a door which leads her to a magical kingdom and the adventures begin. The pen-and-ink, along with watercolor, and the use of white in the background creates a visual story that jumps off the pages. “Journey” is another contender for the coveted Caldecott award.

Ball, by Mary Sullivan, is a clever story that actually has one word which is the title of the book. The dog that is featured on the cover is the main subject and his love and anticipation of playing with a small red ball is his main objective. When the girl goes to school, the expression on the dog is full of sad bereavement. How he goes through his day at home attempting to find someone or something to play ball with him is hilarious and brilliant! There’s a great chance that your very young child will surely know this word by the story’s end. The digitally colored panels that are drawn with pencil brilliantly give a hue of an old-fashioned look of faint yellow and orange. 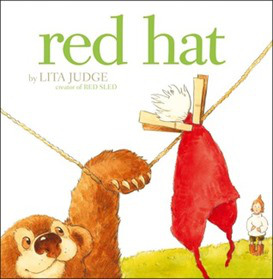 Red Hat, by Lita Judge, is a fun adventure as animals discover, one by one, a red hat that originally hung on a clothesline to dry. Each animal makes a whooping sound (the only one in the book) as they attempt to use it. As the hat begins to unravel, the ending will surely bring a surprising smile to all. The watercolor and pencil illustrations showcase the amusing expressions of each animal!

The Boy and the Airplane, by Mark Pett, has pages filled with muted grays and light browns reminiscent of the color of wrapping paper. The story begins with the legs of an adult walking away and a small boy holding onto a wrapped package. Upon opening the package he finds a toy airplane. He proceeds to throw it and play with it until it accidentally lands on the roof. He then attempts to retrieve it to no avail. How he solves this dilemma, and the lessons learned, portrays patience and selflessness. The muted watercolors make for a story reminiscent of days long past. 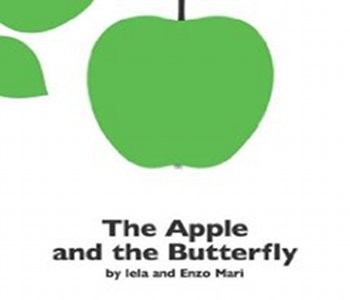 The Apple and the Butterfly, by Lela and Enzo Mari, was first published in Italy back in 1969. This brightly painted book with only reds, greens, blacks and browns, shows the life cycle of a caterpillar. It begins with the small insect crawling out of an apple and then curling around its cocoon. Upon turning the pages the reader will witness the seasons changing and the caterpillar miraculously becoming a beautiful butterfly. The book ends with the butterfly feeding on a flower that eventually grows into an apple and beginning the cycle again.