"I Dream of Ketching Fish": The Legacy of Wilford Woodruff | Meridian Magazine

“I Dream of Ketching Fish”: The Legacy of Wilford Woodruff 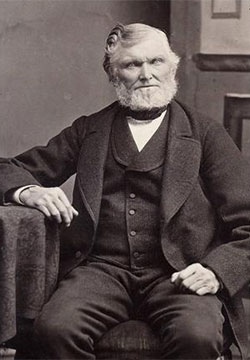 Wilford Woodruff was already forty years old when he stopped his carriage at the mouth of Emigration Canyon so Brigham Young could survey the prospect below. Elder Woodruff, an avid fisherman, was delighted to see “the glorious valley abounding with the best fresh water springs rivulets creeks & Brooks & Rivers of various sizes all of which gave animation to the sporting trout & other fish while the waters were wending there way into the great Salt lake.”

By the time of President Woodruff’s death a half century later, the Saints had used the waters to make the desert blossom as a rose, and the single settlement in the Salt Lake Valley had multiplied into nearly five hundred settlements from Canada to Mexico. By 1898 the population of Saints, small enough to winter the first year entirely within a small adobe fort, exceeded one hundred thousand. The rapid prosperity of the Church magnified the nation’s “Mormon problem,” and it fell upon President Woodruff to achieve reconciliation. Under his presidency, the Manifesto was issued and Utah was granted statehood.

In 1892, Woodruff composed a remarkable letter later published in Forest and Stream, a prominent weekly sporting periodical. His letter is an unusual reverie in which time and place are remembered in context of landscape and wildlife:

“I was born on March 1, 1807, at Avon, Hartford county, Conn., on the banks of a trout brook which had turned the wheels of a flour mill and a saw mill, owned by my grandfather and father, for many years. As soon as I was old enough to carry a fish-rod I commenced catching trout, which I have continued to do, from time to time, for nearly 80 years.”

Wilford Woodruff’s conversion in 1833, at age twenty-six, redirected his life. Beginning with Zion’s Camp in 1834 and then five missions in quick succession, he had little enough time to spend with his wife Phebe Carter, whom he married in 1837. While on his first mission to England, he recorded a poignant dream:

“I saw a still larger River. It appear like Farmington River [near his birthplace in Connecticut] in the U.S.A. at the Mill which my Father is tending, & on the other side of the River was a Boat to which was tied many fish lines. On one hook was a fish so large that the captain of the Boat Israel Dormon by name could not bring him into the Boat.“

Woodruff’s river dreams suggest that his love of place was twined with his love of people. Another mission dream reunited him with his father and brother on the Farmington River:

“I fel asleep & Dreamed I was at my Fathers house in Farmington Con. my father had caught some fish. I thought I would go to fishing to. I went under the saw mill & the trench was full of pickerel father shut down the gates & the fish started to run down stream with the water. I run down to the bottom of the Island jumped into the trench, & caught a great many large fish with my hands as they came down. I then went to the mill & Brother Asahel Woodruff who has been dead two years came & broght many fish & showed me which he caught in the trench.“

Franklin D. Richards’s funeral oration referring to President Woodruff as “a mighty fisher of men” recalled both the Savior’s call to Peter and Jeremiah 16:16 (“I will send for many fishers”). President Woodruff had been a hunter and fisher of men. On missions to Maine and England, he had drawn a net taut with a harvest of souls. Even while gathering the catch Jeremiah prophesied, President Woodruff had sensed the beauty of this world; he had paused to hear a wolf howl fade over the waters of the Platte and had walked miles to watch an old man flash fly line across the River Ribble. President Woodruff shepherded his catch of souls to Zion, accompanied Zion to the West, and was rewarded with unfished waters.

Where to find more re: his fishing stories?