Subject of Prayer comes before the Supreme Court in Town of Greece v. Galloway | Meridian Magazine

Subject of Prayer comes before the Supreme Court in Town of Greece v. Galloway 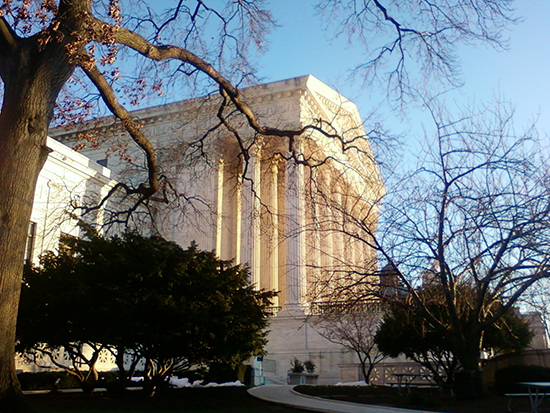 On November 6, the United States Supreme Court will hear arguments involving the issue of legislative prayer in the case of Town of Greece v. Galloway. Pew Forum published an article this week that essentially acts as a brief for the public, breaking down the arguments on each side of this case and what the implications of the Court’s decision will be. To read the original article, click here.

This case involves the argument of two local citizens that their town’s policy of beginning board meetings with prayer violates the Establishment Clause in the First Amendment of the U.S. Constitution. The town (Greece, NY pop. 96,000) counters that the practice does not violate the Establishment Clause because the opportunity to offer the prayer is not made exclusive to residents belonging to any one religion.

This type of case is not without precedent. In the high court’s 1983 decision in Marsh v. Chambers, the justices ruled that the Nebraska legislature’s practice of opening each session with an invocation did not violate the Establishment Clause. Legislative prayer is a centuries-old tradition in this country that extends back to the founding fathers.

The Pew Forum article neatly breaks down the details of the arguments being presented by each side of this case.

“The town and its supporters argue that its practice of opening board meetings with a prayer or invocation is squarely within the tradition of legislative prayer that has existed since the founding of the United States and that the Supreme Court upheld in Marsh. To begin with, the town contends, the practice is open to all who are interested in participating, regardless of faith tradition. As a result, they say, opening prayers have not been confined to one denomination or religious tradition but have been offered by adherents of different faiths, including Christianity, Buddhism, Judaism, the Baha’i’ faith and Wicca.”

“The fact that most prayers have been given by Christians reflects the fact that most people in the community are themselves Christian and is not evidence of impermissible discrimination against non-Christian religions by the town or its employees, according to the Town of Greece. In addition, the town argues, these prayers do not seek to convert listeners or denigrate other faiths.”

“Galloway, Stephens and their supporters say that Marsh should not apply in this case because the Greece Town Board’s practice of opening each meeting with a prayer differs significantly from the specifics at issue in the 1983 ruling. In the Town of Greece, citizens who have business before the board – such as those seeking zoning changes or business permits, those who wish to comment on public questions and those receiving awards or citations – must attend the meetings in person. Because the prayer is an integral part of the meeting, those in attendance are effectively required to participate in a religious ceremony, regardless of their personal beliefs, which makes the practice coercive, Galloway and Stephens argue. And, they point out, such government coercion has specifically been deemed unconstitutional by the high court in a number of rulings, most recently in Lee v. Weisman (1992), a case involving clergy speaking at graduation ceremonies.”

The Supreme Court allows outside parties and groups to submit their own additional viewpoints on a particular case. One surprise amicus curiae (“friend-of-the-court”) submission to the case came from the Obama administration. A brief submitted by the U.S. solicitor general contends, “Marsh allows for legislative prayer, even with sectarian content, as long as the prayer does not proselytize or disparage another faith tradition. The prayer policy of the Greece Town Board met this test, the administration says, and thus should be upheld.”

The implications of this case if the Supreme Court rules in favor of Galloway, may mean “some separation between the prayer and other parts of the meeting agenda, instructing the town to adopt guidelines to promote nonsectarian prayer or simply banning prayer altogether at town board meetings.”

Legislative prayer has been a long-standing tradition in this country and the upcoming decision has the potential to set new precedent against this tradition. The Supreme Court proceedings that will begin tomorrow could use the prayers of those that hope to preserve invocations in these meetings across the nation.

To read the full article on Pew Forum, click here