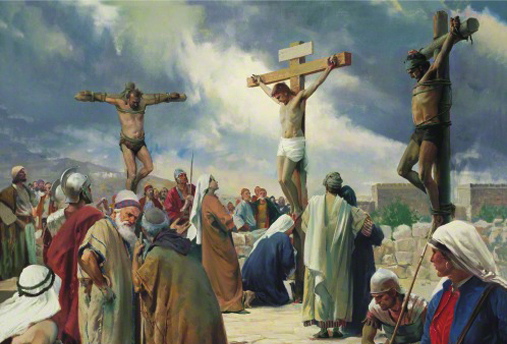 Every lesson The Savior ever taught is important enough to be the topic of a Last Lecture, but the last lesson he actually did teach can heal our relationships and our hearts. Hanging on the cross between two thieves, our Savior spoke in reference to his crucifiers, “Father, forgive them, for they know not what they do.”

I have found that, for the most part, when people sin they don’t truly understand the seriousness of their sin. Once they discover (through the process of repentance) how serious their sin really is, they are horrified, devastated, and they promise they would never have committed such a sin, had they had any idea what they were doing.

This principle holds true when the sins are very basic, and when they are very serious. A young lady once told my bishop that she had wanted to see me professionally but I “wouldn’t give her the time of day.” Apparently, she had tried to approach me in the hall and I had been speaking to other people and didn’t even notice that she was waiting to talk to me. When the bishop told me she felt rebuffed I was profoundly sorry. I had no idea what I had done.

A more serious offense illustrates sinning in ignorance. A young mother with a van full of garrulous children was pulling out of her friend’s driveway one day, and she felt herself run over a slight bump. Assuming she had hit the curb, she waved goodbye to her friend and continued down the street. Later he discovered she had run over the family dog. Of course, when she discovered her folly, she was mortified. She had no idea what she had done.

Knowing but Not Really Knowing

In these two examples, the hurt was caused by sins of omission (cluelessness, not being aware or watchful). In the next example, the sin is a sin of commission, and the perpetrator knew she was sinning, but she truly didn’t understand the gravity of her sin.

I had a client once who went off to college and became entranced by the party life. She was invited to join a sorority; she attended frequent frat parties, drinking more and more excessively as the semester drew on. She sought counseling after discovering she and been raped at one of those parties, when she was too drunk to know it. Before this experience she did not understand the gravity of drinking. She knew not what she was doing. Once her eyes were opened she was devastated by her behavior.

Frequently, I find people choose to sin because they don’t truly understand the seriousness of the sin. They might rationalize their sin. They may consider that in their particular case the sin is no big deal. I knew an EMT who arrived on the scene of an accident and found a woman so near death he thought she wouldn’t survive the night. Before he carried her away, he took the diamond earrings out of her ears and put them in his pocket. He didn’t know that those earrings were heirlooms, a gift promised to a granddaughter, who had no other memento to remember her grandmother by. He knew not the profound loss he had caused a grief-stricken teenage girl.

When we fail to make positive assumptions we may sin in retaliation. We assume the person is evil and out-to-get us, and we respond in kind. Then we are deliberately trying to hurt someone, but we justify the behavior with “she hurt me first.”

A young man came in for counseling who had cheated on his wife. At the beginning of our meetings he kept justifying his sin, “She doesn’t love me. She is mean to me. She is always cutting me down.” When this young man learned what he didn’t know he was mortified. His wife adored him. She felt alienated from him. In her family of origin, she witnessed lots of criticism, because that was the way her parents engaged. She had learned that the way to be close to someone is to scrutinize them. She had no idea she was hurting her husband the way she was. She, like her husband, knew not what she did.

If we would make the positive assumption that the person who offends us “knew not what she did” then we wouldn’t be tempted to sin in retaliation. We would forgive rather than seek vengeance.

I’m reminded of a spy novel where a nuclear missile wrongfully goes off, precipitating a retaliatory strike, and ultimately a war. If the warring nations knew that the first strike was inadvertent, tragic nonetheless, but inadvertent, an entire war could be averted.

When someone has sinned against us we can almost always make the assumption that they don’t understand how much they are hurting us because if they truly understood the depth of the wound, if they had any recognition at all, they would be horrified, and deeply remorseful.

I add the caveat “almost” always, because there are people in the world who delight in evil, and they deliberately try to hurt God’s children. We call these people psychopaths, and recognize they have an antisocial personality disorder. But psychopaths are rare, and those who wound us are more likely to know not what they do.

When someone hurts us, and we can’t think of anything we could possibly have done to deserve such behavior, we must assume they know not what they do. Before retaliating, or holding a grudge, of launching an all out war, it might be healing to have a conversation, and find out if they know what they have done.

JeaNette Goates Smith is a Licensed Marriage and Family Therapist in Jacksonville, Florida. She is the author of four books, including Unsteady Dating: Resisting the Rush to Romance. Contact her at the website www.smithfamilytherapy.org

I don't agree that running over a dog unknowingly is considered a sin. On purpose yes, but I would say that it would be classified as an "accident" if the person did it having no idea they did it.

Wow....Such Wisdom. Thank you for using your gifts to bless others. This is truth....There really is healing when we realize that we all make mistakes and hurt others when we know not what we do. Thank you....