The LDS and the LMS | Meridian Magazine

The LDS and the LMS

To see the original article from BYU Studies, click here. 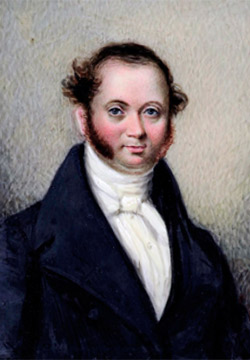 William Howe who was associated with the LMS and involved in the translation of a Tahitian Bible.In fall 1843, four Latter-day Saint (LDS) missionaries embarked from New Bedford, Massachusetts, to launch missionary work in the South Pacific. The quartet consisted of Addison Pratt, Benjamin F. Grouard, Noah Rogers, and Knowlton F. Hanks. Tragically, Hanks passed away three weeks into the voyage and was buried at sea. As the missionaries began teaching in Tahiti and other islands, they encountered Protestant missionaries sent from the London Missionary Society. These LMS missionaries were a mixed blessing for the proselytizing Saints, who found them both a stepping stone as well as a stumbling block. Over several decades, they had taught the native Tahitians English, translated the Bible into Tahitian (in 1835), and abolished human sacrifice. But the English missionaries were generally not supportive of the message the Latter-day Saint missionaries carried to the islanders in the 1840s.

Previous studies of the South Pacific mission have relied heavily on the journals kept by Addison Pratt, his relatives, and other Mormons. This study adds to our understanding of this mission by presenting the writings of missionaries of the London Missionary Society (LMS) that discuss their interactions with the Mormon missionaries. In this study are one complete letter, parts of seven other letters, and extracts from a journal-all the known writings of LMS missionaries in the South Pacific region from 1849 to 1857 that mention the Mormon missionaries. This information sheds light on the interaction between the English missionaries and the LDS missionaries, showing that there was at times goodwill and friendship as well as the antagonism that has been previously documented.

Addison Pratt recorded his first meeting with three LMS missionaries. After being rebuffed by one of them, another extended fellowship:

” [Krause] said the grand object in which we were both engaged was the same, which is, the conversion of the world & the fundimental principles of the gospel, we both believed alike, & these extra notions . . . aught not to come between us to disturb our good feelings for each other & the union of our labours in the common cause of Christ. He presumed, if the London mission society knew the particulars of my situation, they would be willing to help me to the necessaries of life as I stood in need. At any rate, said he, I will help you, if I have any opportunity to send to you.“

“ I have met with but few men that were so warm hearted in the cause of Christ. He had voluntarily spent his patrimonial estate, to get to these Islands without encouragement from any boddy, & had sacrifised the society of all his kindred in the flesh for Christ’s sake & was for some time on his own expense among these Islands, but is now supported by the London mission society – I was much interested with him, & had I oppertunity with him for a few days, & he was from under the influence of that old hypocrite Mr. Platt, I have but little doubt that he would become a Saint. It is Mr. Platt that has written to all of these Islands to reject us, & Br. [Noah] Rogers felt so severely the evil effects of it.“

In July 1849, one of the LMS missionaries wrote:

“We perceived … that some of the people had “itching ears” respecting Mormonism.

From Rimatara we sailed for Tupuai [Tubuai]. On that island the two mormons we met at Rurutu have been living for some years; & most of the people had embraced their doctrines. There were a number, however, who had not joined them, & some who had, were “tired” of it.

The next island at which we called was Raivavae. We spent the sabbath with them. Several children were baptized & 2 persons were received into the church. The children in the schools have made but little progress, & the people in general are not so far advanced, as at Rurutu & Rimatara. There we met a Tahitian whom Grounart [Benjamin Grouard] had taken as teacher of Mormonism; & no doubt he will succeed to a certain extent, as several were disposed to adopt his system.”

Although there was certainly friction between representatives of these two denominations, some degree of mutual respect occurred when the missionaries from each party discussed their personal beliefs while meeting in private. This study also demonstrates the diverse impact of Christian proselytizing among those who journeyed to the islands of the sea. Surely the Mormons recognized how LMS work laid the groundwork for their own, just as Paul wrote: “I have planted, Apollos watered; but God gave the increase” (1 Cor. 3:6).